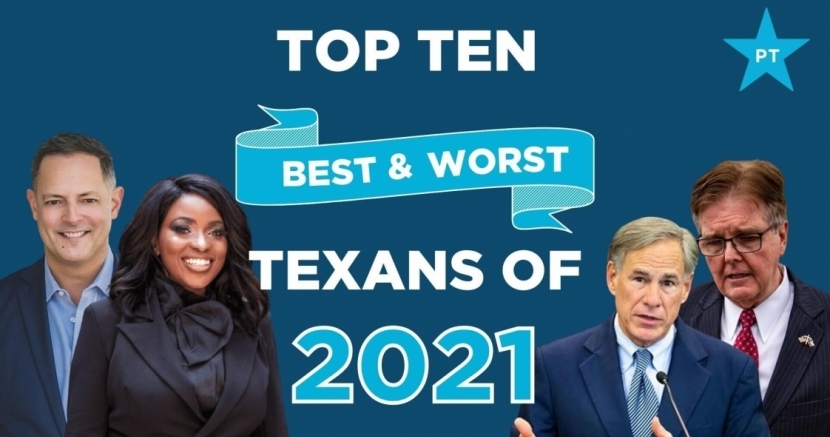 Although many were in a hurry to start 2021 after the dumpster fire that was 2020, we quickly realized that maybe we shouldn’t have been in such a rush.

At a macro level, 2021 brought an attempted insurrection, a devastating winter storm, a continued pandemic (with new variants), and four extreme legislative sessions.

But in the midst of the chaos, there were some wins to celebrate; a new president who is not a national security threat, we have our first woman, first Black and first Asian-American vice president, hundreds of millions of Americans have been vaccinated against COVID-19, Britney was freed, and our communities came together to support one another during difficult times.

As we say so long to 2021, here’s our annual look back on the best and worst this year had to offer.

1. Progressive Activists at the Capitol

Activists showed up session after session to protest, testify, and hold lawmakers accountable. Voting rights activists inspired the Democratic quorum break, abortion rights activists marched with thousands at the Texas Capitol, trans kids and their families poured out their hearts and souls to protect their existence, and so many other activists worked tirelessly this year without recognition.

A majority of Texans support abortion rights, and abortion funds and providers were on the frontlines of the fight to defend those rights this year. The night before Texas’s six-week abortion ban went into effect, providers worked until the midnight deadline to perform abortions and have continued to provide compassionate, essential care. Meanwhile, abortion funds have been a crucial resource for Texans who cannot afford care or who need to leave the state to obtain abortions.

3. Heroes of the Winter Storm

Texans can’t rely on Republican state officials to protect us, but in times of crisis we can depend on each other. To all of the Texans who volunteered to help their neighbors during the winter storm by taking people into their homes, passing out water, donating, or just lending a helping hand, thank you. You are what makes our state so great.

Rep. Jasmine Crockett was the sole Black freshman in the Legislature this year, but freshman status didn’t stop her from being outspoken on some of the biggest issues. She was an important voice and media presence on voting rights, police reform, marijuana policy reform, and more. Crockett debated colleagues on the House floor and delivered powerful speeches, including the moment she addressed HB 1900, a bill that threatened large cities (like Dallas) who supported police reform.

Rep. Rafael Anchía chairs the Mexican American Legislative Caucus and was busy this year fighting to protect voting rights and demanding fair redistricting maps. Anchía also had a key moment during the first session when he schooled Rep. Briscoe Cain on the House floor about the racist history of the phrase “purity of the ballot box,” a phrase used in Cain’s anti-voter legislation.

It’s hard to separate Abbott’s actions from Patrick’s because the governor is so often acting on the lieutenant governor’s whims. It’s worth asking who’s really in charge here in Texas, Abbott or his puppet master?

Sen. Ted Cruz started the year supporting insurrectionists and things only went downhill from there. Cruz ditched Texas and his dog Snowflake for Cancún when the winter storm hit, continued to spread vaccine misinformation even though he’s fully vaccinated, and has an ongoing spat with Big Bird for encouraging kids to get vaccinated. Cruz is an embarrassment to our state and entire country, but what’s new?

Rep. Briscoe Cain was wholly unqualified to chair the House Elections Committee this year. He “authored” the omnibus anti-voter bill, consistently broke committee rules to push his legislation forward, and at one point accidentally ended a hearing that hundreds of Texans were attending after he refused to recognize the Chair of the Legislative Black Caucus.

On January 6th, insurrectionists stormed the U.S. Capitol in an attempt to stop a democratic election. We cannot forget the names of Texas elected officials who betrayed democracy by either attending the attack in person, supporting the actions of domestic terrorists, or voting to overturn election results. For accountability purposes, here are those names. There are also a few insurrectionists newly running for office, including Mark Middleton in House District 68.

For years we’ve avoided putting Rep. Louie Gohmert on our lists because, while he’s an embarrassment, we also saw him as irrelevant. Not so in 2021, in which he helped plan the Jan. 6 insurrection and spoke at a QAnon event where Trump adviser Michael Flynn encouraged a military coup. The climate change-denying congressman also asked whether federal land agencies can alter the orbit of the Earth and moon during a House Natural Resources Committee hearing.

“Democratic” State Senator Eddie Lucio Jr. is finally retiring and will not be missed. After voting with Republicans for years on anti-abortion and anti-LGBTQIA+ legislation, Lucio reached a new low this year when he joined a crowded room of Republican lawmakers to celebrate Gov. Abbott signing the six-week abortion ban into law.

While the many legislative sessions that defined 2021 have come and gone, Progress Texas is here to fight alongside you all year round. In 2022, we’ll continue to lift up the voices of the very best and hold the worst accountable. Join us in the fight by helping us build a more progressive Texas in the coming year—we can’t do it without you!

Like listening more than reading? You can listen to our team talk through our best/worst list on our latest Progress Texas Podcast!

Check out our previous lists of Best and Worst Texans!