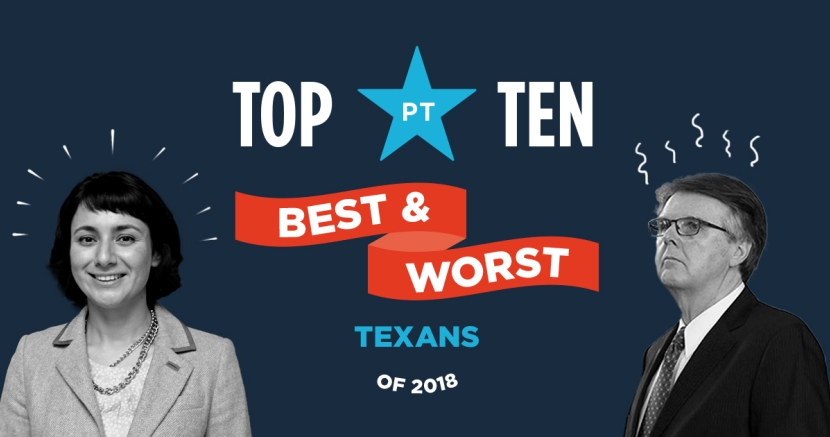 This year, some Texans were naughty. Others were nice. We’ve been making our list and checking it twice. Here are the results.

This year has been one for the books. Texas has seen tremendous progress from hardworking folks who want to move our state forward, but the state has also experienced attacks from reprehensible legislators who want to further their own interests and promote regressive policies. Some of these faces are familiar while others are newly elected. In the midst of it all, we’ve been keeping track.

Without further ado, here are the ten worst and best Texans of 2018.

Ted Cruz could be at the top of this list solely for his “beard,” which itself is a crime against humanity. But in addition to the mess on his face, Cruz has been railing against Texans for years.

Cruz was never around as our senator, and now we’re stuck with him for six more years. He also ran a tasteless campaign against Representative Beto O’Rourke. Cruz’s first ad of the general election campaign was a lie and he waited until the last minute to plan debates, stripping many Texans of additional opportunities to hear from the two senatorial candidates.

This year, Cruz also refused to speak with Dr. Christine Blasey Ford and voted to confirm then-Supreme Court nominee Brett Kavanaugh, turning his back on women and sexual assault survivors. He got Trump, who infamously criticized his wife and father, to campaign for him, proving once again that he’s a coward with no sense of loyalty. Tough as Texas? Ted Cruz couldn’t find tough if it elbowed his wife in the face.

Texas Attorney General Ken Paxton—the state’s top law enforcement official—enjoys breaking laws more than enforcing them. Paxton has been under three felony indictments for the majority of the time he’s been in office.

In addition to his indicted status, Paxton is trying to take away health care from millions of Texans. He wants to defund the Affordable Care Act and strip away protections for pre-existing conditions. Keep in mind, Texas has the highest percentage of uninsured residents out of all 50 states, and one in five uninsured children live in Texas.

Just recently, the ACLU of Texas filed a lawsuit against Paxton over a 2017 Israel boycott law that forces workers to choose between their livelihoods and beliefs. Paxton was re-elected for office this year and will continue on as our Attorney General. Here’s hoping he’s finally held accountable for his crimes and doesn’t serve out his full term.

With the 2019 legislative session around the corner, we can’t help being reminded of Patrick’s shameful agenda in 2017. Patrick was the driving force behind some of the most terrible bills to ever be introduced in the Texas Capitol.

Unfortunately, he was re-elected this year and will serve as our Lieutenant Governor again during the upcoming session. We can only hope that with a bluer House, Patrick won’t be as emboldened to legislate hate as he did in 2017. That being said, Patrick still has his GOP supermajority in the upper chamber. We’ll be here to call him out for his racist, homophobic, xenophobic, and sexist policies every step of the way.

In his time in office, what has Abbott done for the people of Texas? Can’t come up with anything? Neither could we. For a man with so much power to do good, Abbott has instead chosen to use his platform to perpetuate hate.

Abbott has failed to remove a racist plaque from the Capitol grounds even after Paxton said he had the power to do so. Abbott’s school safety plan from this year skirted around the primary issue at hand — guns. And he refused to act on the humanitarian crisis at the border. Next election, Abbott’s got to go.

Stickland once said, “Rape is non-existent in marriage. Take what you want my friend.”

He later said it was a joke.

Stickland has also been called out for anti-Muslim rhetoric, has alluded to wanting to shoot reproductive rights supporters, has referred to himself as a “former fetus,” and introduced the “Constitutional Carry” bill. Enough said.

Gina Hinojosa has been honored as an up-and-coming Texas Progressive. This year, she helped register a TON of students to vote, helped organize an all-female representative dream team to get out the vote, and has already filed some important progressive bills for the upcoming session. Some of these bills address issues such as voting rights, reproductive rights and medical marijuana. Hinojosa is a true progressive and works to ensure that all residents in her district have bright futures.

Garcia and Escobar are Texas’ first two Latinas to be elected to Congress. Garcia, the former State Senator and fierce progressive fighter, hails from Houston. Escobar is a powerful criminal justice advocate who served as County Commissioner and County Judge in El Paso. We’re excited to see how these two women represent Texas in Congress.

The “Houston 19” is a group of African American women who ran for various judicial seats in Harris County and won. This marks the single biggest electoral victory for black women in Harris County's history (and maybe even the state).

Beto may have lost his Senate race to Cruz, but he helped get progressive Texans elected up and down the ballot. And for that, we can’t help but include him in this list. He was one of the biggest stories in 2018 and came closer to flipping the Senate seat than any other candidate in recent history. What’s next for Beto? We can’t wait to see.

While the campaigns that defined 2018 have come and gone, Progress Texas is here to fight alongside you all year round. In 2019 we’ll continue to lift up the voices of the very best and hold the worst accountable. Join us in the fight by pledging to make progress in the coming year—we can’t do it without you.

Voter Suppression Bill SB 7: Where it’s been, where it’s at, and where it’s going
5 days ago

Texas Marijuana Bills: Have they passed or gone up in smoke?
1 week ago