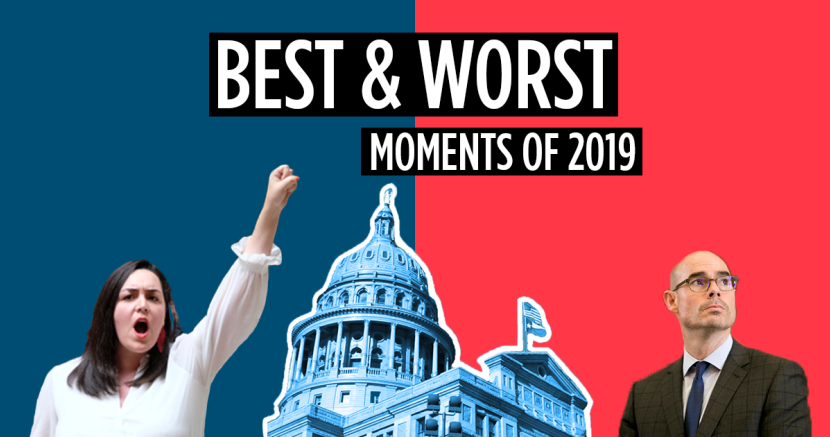 Progress Texas
From the Texas Legislature, to ALEC in Austin, and the 2019 elections, there were plenty of options to choose from this year.

As we look forward to 2020 in Texas, it’s important to remember the work that has brought us here. Here are our picks for the best and worst moments of 2019.

The 2019 Texas Legislative Session had 14 Democratic freshmen, and they made a big impact. Moments that stood out include Julie Johnson (D-Carrollton) invoking a motion to initially stop anti-LGBTQ legislation known as the "Chick-fil-A bill," Erin Zwiener (D-Driftwood) attempting to make student IDs acceptable forms of voter ID, and John Bucy (D-Austin) successfully getting the first recorded vote on Medicaid expansion. These are steps in the right direction and exactly what the voters asked for in 2018. Progressives can flip the House with nine more seats in 2020. Check out our Flipping Texas report to learn more!

Worst: Republican Attacks on the Homeless

While Gov. Greg Abbott points his finger at Austin, the entire state he governs is struggling with a homelessness problem. Yet that didn’t stop Republican attacks on the homeless, along with the governor tweeting out a years-old video of the worst day of someone’s life and falsely attributing it to homelessness. While the city of Austin is repurposing old hotels to consolidate housing and services in one place, Abbott’s “homeless parking lot” doesn’t even have the porta-potties he promised. It’s as if helping the homeless was never his motivation in the first place...

Texas can be a state that promotes voting and allows every eligible Texan the ability to exercise their right. It begins with ensuring that the growing majority of Texas - women, young people, and people of color are voting, advocating for reforms, and in elected office.  This year, Texas Republican officials pushed dirty antics to suppress the right to vote. From mass statewide voter purge of U.S. citizens to force anti-voter policies through the legislative process. Voters, progressive organizations, and elected officials stood up to anti-voter attacks and demonstrate the muscle needed to rebuild our crumbling election system and eradicate the hurdles to voting.

Texans need affordable health care that includes reproductive wellness. Our state has failed to expand Medicaid, leaving thousands of people and children uninsured, and is now using an extremist conservative agenda to attack local health care centers. Trusted health care providers like Planned Parenthood have been working to provide quality health care in communities across Texas for years. Progress Texas, health advocates, and reproductive champions fought against legislation that would prevent Texans from receiving birth control, cancer screenings, STD treatments, HIV testing, PreP/PEP, and other health care services. We are committed and will continue to fight for accessible health care for all.

Best: Bonnen Not Coming Back After Scandal

Speaker Dennis Bonnen's precipitous fall from power surprised some because he was thought to have had a good first legislative session. After threatening any House member who dared to oppose incumbent colleagues in 2020, Bonnen was recorded making plans of his own to oppose House incumbents. The move destroyed trust in Bonnen and created rifts in Republican ranks, during a year Democrats have mounted credible campaigns to take back the House.

It's just too much for Gov. Greg Abbott and other state Republican leaders. Texas' urban and suburban areas are now controlled by Democrats. What do Republicans do? They mount unprecedented attacks on cities and counties, threaten to take over school districts, and move to preempt local ordinances supported by local voters. It's a GOP attack on local voters, and should be looked at as part of ongoing Republican efforts to disenfranchise voters who oppose them.

Progressives have filed to run for office up and down the ballot across the state, and we have the opportunity to elect Texans who have our communities’ best interests in mind. We’re excited to see a pool of candidates that are as diverse as the state itself, and are looking forward to flipping some seats in 2020!

In their latest attempt to suppress voters, Texas Republicans passed a mobile voting ban during the 2019 Texas Legislative Session. The ban disproportionately impacts young voters by effectively ending the use of temporary or mobile early voting sites across the state. Thankfully, several organizations have joined together in a lawsuit against the unconstitutional ban.

Constitutional amendment elections have historically low turnout in Texas. Knowing this, we created a statewide voter guide to help demystify the amendments and used our bilingual GoVoteTexas.org site to keep Texans informed on how and where to vote. And while we know Texas can still do better, voter turnout more than doubled this year compared to the 2017 election. That is a significant jump and foreshadows the increase in turnout we’re expecting to see in 2020. Progressives are fired up and ready to vote!

Texas Republicans continued their attacks on queer Texans in the 2019 legislative session with the passage of their discriminatory “Chick-Fil-A” bill. In addition to their hateful legislative agenda, Texas still has no statewide laws protecting LGBTQIA+ individuals from discrimination, so-called "conversion therapy" is still legal, unemployment is higher for queer Texans, and Texas leads the nation in transgender murders. Fortunately, queer Texans had members of the first-ever LGBTQ Caucus fighting on our behalf. But in 2020, we must elect more lawmakers who will fight for full equality.

Best: Sending a Message to ALEC

The government should respond to the needs of the people, not corporate interests. When ALEC came to host its annual meeting in Austin, Progress Texas, along with 11 other progressive organizations, hosted an “unwelcome reception” that they’ll never forget.

Edinburg, Odessa, Houston, Nacogdoches, El Paso, San Antonio. These are a few of our communities that experienced mass shootings in 2019. We had over 30, leaving Texans dead, distraught, and traumatized. The response from the Texas GOP? Silence. In 2020 we must flip the state so we can bring justice and prevent future mass shootings.

One of the biggest wins for Texas women this session was passage of HB 650 prohibiting incarcerated women from being shackled during labor and delivery. The bill also allows women to spend a crucial 72 hours with their child after birth. Childbirth is exhausting and at times traumatic without the stress of being restrained. All women, regardless of circumstance, should be allowed dignity and respect during the birth process.

For more information on our plans for 2020, view our Special Report: Flipping Texas and sign up for updates.