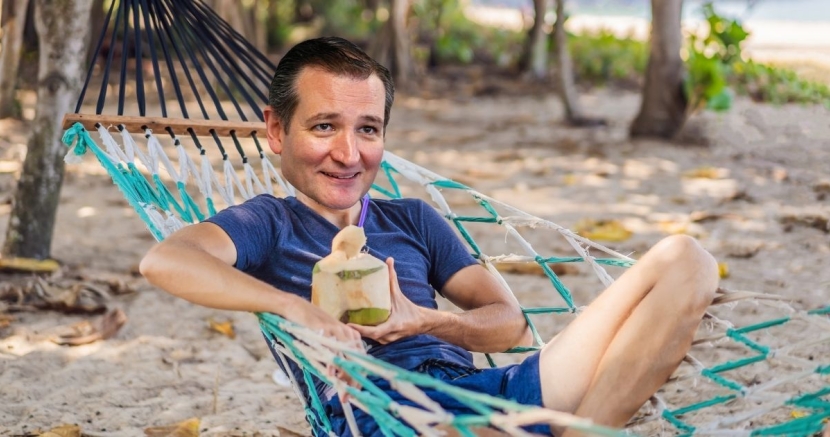 What Texas and the nation said about Ted Cruz in Cancún

No matter what crisis Texans are facing, there’s always one constant we can depend on — Senator Ted Cruz will find a way to screw it up even more.

Last week, millions of us were without power, heat, and water as our state experienced a disastrous winter storm that has already claimed the lives of dozens of Texans. At a time like that, you would expect a senator to step up, volunteer, and get help for those who need it. But not Ted Cruz. Instead, he jetted off to Cancún, Mexico to escape the crisis unfolding in his home state.

Here’s the story of one of the worst decisions Cruz has ever made using a compilation of articles about the incident.

It all started when someone uncovered a photo of Cruz at the Houston airport, fleeing the state while Texans shivered in their homes.

Texas Sen. Ted Cruz is under fire as photos of him in an airport and a plane showing him flying to Cancun during the Arctic blast which has crippled his home state and especially his hometown of Houston, surfaced on Twitter.

Usually, it takes at least one full day in Cancún to do something embarrassing you’ll never live down. But for Ted Cruz (R-Tex.), it took just 10 hours — from when his United plane touched down at Cancún International Airport at 7:52 p.m. Wednesday to when he booked a return flight back to Houston around 6 a.m. Thursday — for the state’s junior senator to apparently realize he had made a horrible mistake.

After social media found out that Cruz took a vacation in the middle of a climate disaster, they spent the day ruthlessly dragging him online.

Sen. Ted Cruz (R-Texas) is getting dragged across social media and back again after abandoning his home state for a tropical vacation in Cancun in the middle of a massive crisis.

While millions were without power amid freezing temperatures and many lacked safe drinking water, Cruz took off for Mexico with his family. Cruz then said the trip was a mistake. His critics agreed wholeheartedly. And many turned his poor decision into fodder for gags, memes and photo-editing jokes.

Ted Cruz realized he had massively screwed up, so he tried to do damage control — by blaming his young daughters.

Yes, rather than taking responsibility for his decision to leave the country for greener pastures and abscond his duties as an elected official, Cruz on Thursday blamed his daughters, who are 10 and 12, for the whole thing.

So yeah, Cruz tried to place the blame on his daughters, Caroline and Catherine, which people on Twitter thought was absolutely ridiculous and disgusting. “Fathers be good to your daughters,” one Twitter user wrote. “Daughters you help fly to Cancun.”

Except his story wasn’t adding up, and his wife’s leaked texts revealed that the vacation was really the adults’ idea.

That whole story unraveled when Heidi’s text messages, which show her actively planning a getaway to Cancún with her neighbors, were leaked. “Is everyone warm? That's a must! We could all huddle in one house,” she suggested in one text, Business Insider reported. Another text read: “Anyone can or want to leave for the week? We may go to Cancun, there is a direct flight at 445pm and hotels with capacity. Seriously.”

When a reporter made the trip over to Cruz’s empty and cold house, they found his dog Snowflake, abandoned by Cruz like the rest of the state.

Huffington Post: People Want Justice For Snowflake, Ted Cruz’s Dog Who Did Not Go To Cancun

People were already incensed over Sen. Ted Cruz’s jaunt to Cancun while Texans battled catastrophically cold weather that caused massive power and water outages. But a photo of his dog, alone, staring out the door of the Republican senator’s house might be the icing on the cake.

For most, though, especially Texans like me who have suffered through a week without heat or water in freezing overnight weather, the notion of Cruz leaving his dog behind to hit the beach was all too much — especially the thought of the power being out when they left.

After widespread criticism brought Cruz back to Texas, he tweeted out a tone-deaf photo op that was too-little, too-late.

Business Insider: Ted Cruz is being mocked over photos showing him loading bottles of water into a car as he seeks to rebuild his reputation after the Cancun vacation debacle

There was more criticism for Cruz after he posted the pictures, which some said appeared to be staged.

"I'm glad someone in Ted Cruz's Senate office finally instructed him on how to fake compassion, humanity, and creating the illusion that he cares about the people he was elected to serve," wrote Melissa Ryan, a researcher on disinformation.

Many people also pointed out that the CDC recommends a 7-day quarantine after international travel, but when has Cruz been one to care about COVID-19?

The Cut: Shouldn’t Ted Cruz Be in Quarantine Right Now?

For Cruz, the optics are … not good. Disastrous, even! And arguably not improved by his defiance of public-health protocol. As scientist and MacArthur fellow Peter Gleick — along with a number of others — pointed out on Twitter, a trip to Mexico merits a minimum of seven days in quarantine, plus a negative COVID-19 test within three to five days of arrival back in the U.S., at least per CDC guidelines.

All in all, Texans are not happy about Cruz’s Cancún adventure, especially not his hometown paper.

Houston Chronicle: As Texans froze, Ted Cruz got a ticket to paradise. Paradise can have him.

Cruz’s trip to Mexico was foolish, callous and sadly telling of his approach to the job over the past eight years. Take our advice, senator, and resign. Seems like you could use a break and we could, too, from an ineffective politician who, even in crisis, puts his personal itinerary before the needs of Texans.

This is the second time we’ve called on Ted Cruz to resign in 2021. Even when you think he can’t get worse, he always finds a way.

The fight to defeat Ted Cruz doesn’t just take place during an election year. The anti-Cruz campaign is a full-time, year-round event. Visit our store to tell the world that you’re a Human Against Ted Cruz, and keep holding him accountable each time he fails Texans (which is pretty much all the time).