The 23 Texas Republicans who fanned the flames of insurrection 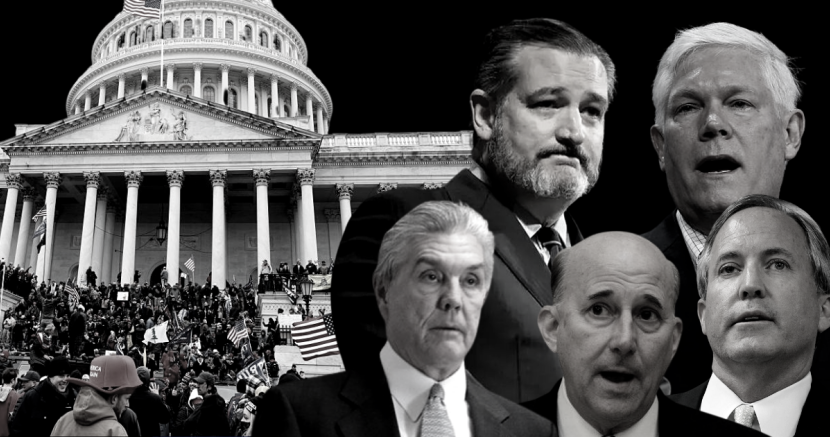 The January 6th insurrection at the U.S. Capitol showed the country the natural consequences of Trump’s lies, as well as the Republican leaders who enabled him along the way. Now, the GOP wants you to forget that they had a part in instigating the riots that led to the deaths of six Americans.

In attempts to avoid responsibility for their actions, many Republicans have called for “unity” in the aftermath of the riots. We agree that the country must heal from the damage caused by the insurrectionists, but simply moving on is not the way to mend the nation. There’s no unity without accountability — we need to ensure that white supremacy and anti-democratic values have no place in our government. Otherwise, what’s to stop it from happening again?

All of these Republicans should be held to account, whether it’s by a Congressional sanction, being removed from their positions, resignation, or our vote. We can’t forget these 23 names, and we need to organize as much as possible to ensure that those who betray democracy are not allowed to represent Texans.

Sen. Ted Cruz - Cruz’s enabling of the Capitol riot was so explicit and so severe, that insurrectionists inside the Senate chamber on January 6th were filmed saying “Cruz would want us to do this.” He became the face of the movement to overturn the election results, leading the Sedition Caucus in the Senate to vote against certifying Biden’s electors in certain states. Ted Cruz’s claims of voter fraud were lies meant to keep Trump in power, and Cruz’s betrayal of democracy means he should be expelled from the U.S. Senate. And after the insurrection was stopped, when Cruz saw the consequences of his actions, he continued into the evening by objecting to the certification of the presidential election with no factual basis.

Ken Paxton - Indicted Attorney General Ken Paxton gave a speech at the “Stop the Steal” rally where he said “we will not stop fighting.” Hours later, people were dead after the crowd left the rally and overtook the Capitol building. Paxton also perpetrated baseless claims about voter fraud by leading a lawsuit to reverse the results in key battleground states, and he was the only state Attorney General in the U.S. who didn’t sign letters condemning the riot. If his indictments and FBI investigations weren’t enough reason for him to resign, his insurrection certainly is. At a minimum, the Texas Legislature should consider impeachment of the attorney general.

Nearly all of these Texas Republican Congresspeople voted to overturn the results of the free and fair 2020 election, betraying their constituents and the country. We’ve listed their names here, as well as some extra information about some especially notable insurrectionists.

Rep. Michael Cloud (TX-27)  - During the riots, Cloud elected to put his fellow Congresspeople at even more risk by refusing to wear a mask in the secure area. He also ignored requests to wear a mask from his Democratic colleagues. After the riots, three Democratic lawmakers tested positive for COVID-19.

Rep. Dan Crenshaw (TX-02)  - Dan Crenshaw has tried to avoid responsibility by saying that he did not support the Capitol riots, but he still supported Ken Paxton’s original challenge to election results in four battleground states. While he rightly condemned Congresspeople who instigated the violence and did not vote against the election results, Crenshaw’s initial support of baseless election challenges helped lay the groundwork for the lies to grow and spread.

Rep. Louie Gohmert (TX-01) - After a judge rejected a lawsuit that would have forced Pence to overturn the election, Gohmert said the ruling meant that “violence in the streets” would be the only response.

Rep. Pete Sessions (TX-17)  - Before the Capitol riot, Sessions tweeted that he was meeting with members of “Stop the Steal” and encouraged the group to “keep fighting.” The day after the riots, Sessions quietly deleted the tweet.

Was perusing Politwoops and noticed...

On Jan. 3, GOP Rep. Pete Sessions tweeted that he had a great meeting with "folks from 'Stop the Steal'" and that he "encouraged them to keep fighting."

Tweet was deleted 4 days later, on Jan. 7, after insurrectionists stormed the Capitol. pic.twitter.com/HeZgyXHjQU

State Rep. Kyle Biedermann - Biedermann is the Texas Rep. currently pushing for Texas secession, but if you want more proof that he’s a traitor to our country, he actually took place in the march to the Capitol that led to the riots.

State Rep. Briscoe Cain - Cain has been supporting baseless claims of election fraud since days after the election, even aiding Trump’s legal team in challenging the Pennsylvania election results. These lies were the fuel for the fire of the Capitol riots on January 6.

Allen West - West is the current head of the Texas GOP and a former Florida congressman. West is far-right extremist who has has protested against mask orders, promoted Islamophobic and antisemitic conspiracies, and worn QAnon associated merchandise. He falsely claimed that the presidential election was stolen and “has been one of the most radical voices of the Republican Party in Texas.” West continues to enable the far-right wing of the party.