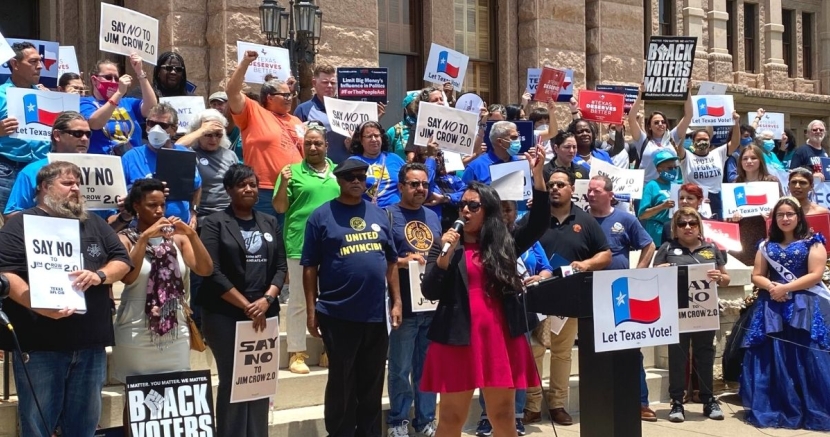 Wesley Story
Unifying event caps a day of advocacy at the Capitol to speak out against Republican voter suppression efforts.

Texas Democrats were forced to leave the state to halt movement on the Texas GOP’s voter suppression legislation. After hundreds of Texans showed up to testify against the anti-voter bills, it became clear Republicans were not willing to listen or negotiate. Instead of sticking around to get steamrolled, Democrats took action and left Texas to prevent a quorum.

House Democrats are now in Washington DC doing their part to defend democracy. But what is not making national headlines are the voting rights activists and everyday Texans who are keeping up the fight at home.

Yesterday, voting rights organizations and partners held a Voting Rights Advocacy Day at the Capitol to train participants on how to advocate for pro-voter, pro-democracy reforms. In addition to the trainings, Progress Texas joined the groups to host a rally and press conference at the South Steps of the Capitol to speak out against Gov. Greg Abbott’s voter suppression agenda.

Together, Texans united to voice opposition to voter suppression bills that seek to weaken our elections and undermine our democracy.

You can watch the full rally and press conference here: