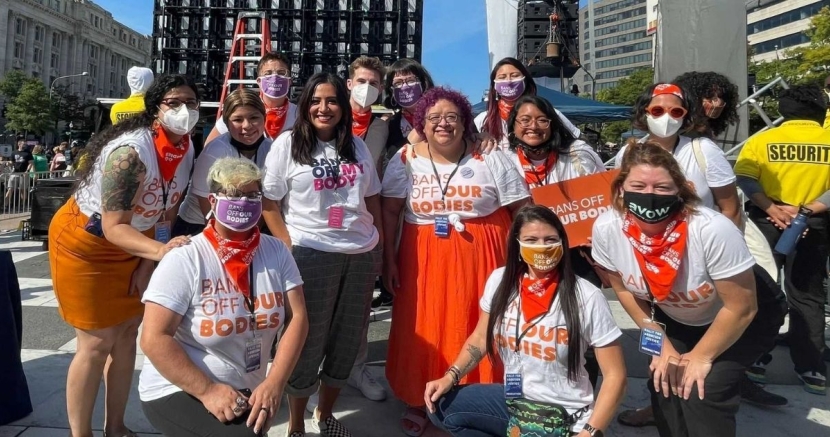 As the nation staged marches and rallies protesting Texas’ near-total abortion ban, a delegation of Texas organizations travelled to Washington D.C. to make the case for immediate federal intervention to protect abortion rights and access.

Polls continue to show the country’s disdain for Texas’ near-total abortion ban (SB 8), which allows any person from any state to sue anyone in Texas who helps someone access abortion care after six weeks. While 70% of Americans oppose the law, an even higher number - 81% - oppose the provision that pays bounties. It’s safe to say that Americans *hate* this law.

On behalf of Texans and Americans everywhere, the Trust Respect Access (TRA) coalition - the largest coalition of reproductive health, rights, and justice organizations in Texas - traveled to Washington, DC to express the urgent need for federal action to protection abortion rights.

Our Advocacy Director @missgomez explains why Texans made the trek to DC. We’re here fighting for #abortion access for everyone!

Here’s an update on where the fight stands today:

Roe v. Wade has always been the floor and not the ceiling. In many places across the U.S., abortion is a right in name only. That’s why no matter what happens in the courts or in other state legislatures, it’s essential that Congress step in to protect access to safe, legal abortion by passing the Women’s Health Protection Act (WHPA), the Equal Access to Abortion Coverage in Health Insurance Act of 2021 (EACH), and the HEAL for Immigrant Families Act, and by abolishing the Hyde Amendment - which bans federal funding for an individual’s right to access abortion.

Together, representatives from the TRA coalition joined congressional leaders in a press conference to speak out against Texas’s six-week ban and discuss what’s at stake for abortion rights in the United States.

The press conference followed the House Committee on Oversight and Reform’s hearing, which addressed the threat posed by abortion bans and other extreme anti-abortion policies being pursued by Texas and other states, along with the Supreme Court’s hostility to reproductive rights. TRA members who testified during the hearing included Dr. Ghazaleh Moayedi, a Texas-based OB-GYN and abortion provider, and Maleeha Aziz, a community organizer with Texas Equal Access Fund.

Members of the coalition also spent the day visiting with members of Congress to ask for their support in passing federal legislation to protect abortion access.

Together, Texas abortion rights advocates from the coalition participated in a performance art protest called “Bans Off Our Bodies” at the steps of the United States Supreme Court. Inspired by Latin America’s powerful feminist performance protest, “A Rapist in Your Path,” protesters called out those in Texas and across the country who oppress the right to abortion.

Following the protest, abortion storytellers spoke out against Texas’ six-week abortion ban by telling the stories of their own abortions.

While standing at the steps of the nation’s highest court, advocates made their message loud and clear: Everyone loves someone who has had an abortion!

Tens of thousands of Texans - and people across the country - rallied and marched last weekend to protest abortion restrictions. More than 600 events took place across the nation, and many of them paid special attention to Texas’ six-week abortion ban, which is the most extreme anti-abortion law in the country.

At the Washington D.C. Rally for Abortion Justice, Texas’ abortion ban was the main focus in a program full of speakers from Texas. Check out some highlights below:

Shoutout to all of the Texas abortion advocates who just performed at the #RallyForAbortionJustice and hyped up the crowd.

Say it with us: BANS OFF OUR BODIES!! #BansOffOurBodies pic.twitter.com/OXwgAQbbun

An amazing crowd here at the #RallyForAbortionJustice.

Try as they may, anti-abortion extremists will not keep us down. We will continue to rise up and fight for our human rights. Abortion is essential health care. #BansOffOurBodies pic.twitter.com/KUhzoSvZGh

Attacks on abortion access disproportionately harm the same people who have always faced systemic barriers to care — Black, Latinx, and Indigenous communities, the LGBTQ+ community, young people, those living in rural communities, people with disabilities, and people with low incomes. Keenly aware of this fact, the coalition made a concerted effort to highlight the voices of those most impacted during our trip.

As one reporter with the Nation put it: “Saturday’s march felt to me less like a reaction to an impending crisis, and more like the national debut of a new generation of visionary feminist leaders—many of them young, many of them Black, or Asian, or Indigenous, or Latina, many of them queer, many of them from the South, many of them from Texas, in particular. Many of them who have had abortions. All of them unashamed of that fact.”

As you can see, the TRA coalition made use of every second we had while in DC. Together, we directed the national spotlight to Texas’ six-week ban and called on Congress to intervene while uplifting the voices of those most impacted by extreme anti-abortion laws.