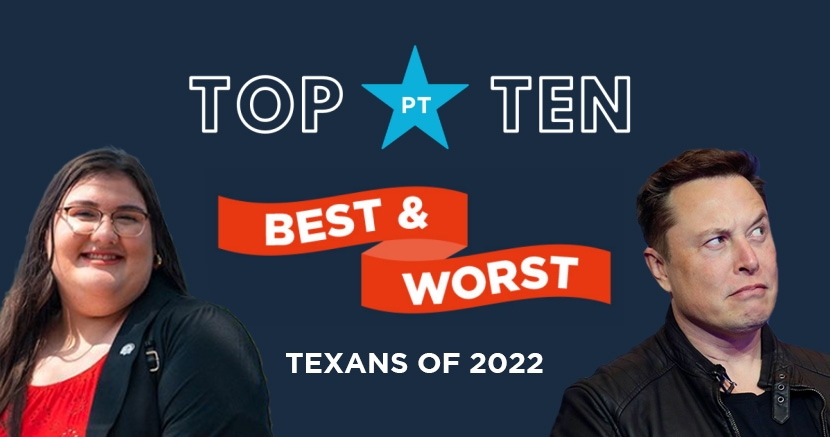 Progress Texas
Our annual list of what inspired and incited us!

Admittedly, 2022 was less chaotic than the two previous years - but that’s not to say it didn’t have its ups and downs.

Democrats and progressives held the line at the local, legislative and congressional levels, but still weren’t able to break the slump of winning statewide. But the bright spots stand out and give us reason for optimism! But we also had a number of tragic news events, and yet we’re still stuck with the same statewide Republicans. And so we keep fighting.

Oh hey this year marks our 10th iteration of the Best/Worst list! Make sure to scroll to the bottom of this year’s list for all of our previous lists form 2013-2021.

The grassroots political movement that sprouted up among fear and frustration of gun violence, went into high gear in 2022. Specifically with a media campaign emphasizing the failure of Texas policies. If you recall any TV ad from the past election, it was likely an ad from Mothers Against Greg Abbott - a mother dressing her kid up for the first day of school in combat gear, or a doctor giving a pregnancy exam to a 12-year-old girl. There are many groups that pop up each year, Mothers Against Greg Abbott found a way to re-frame “MAGA” and make a splash in the 2022 election cycle.

We knew from the start that it would be hard to “Build Back Beto” but we also knew that if anyone was going to make a real race at the statewide level that it was going to be O’Rourke. Running for office takes a serious toll on one’s health and family, and the man’s been doing it for the better part of five years now. And yet his efforts are part of the reason why our legislative chambers picked up gains in 2018 and held them in 2020 and 2022. He played an active role in the 2021 legislative session. He’s given hope and voice to millions of people in this state who feel they didn’t have either - and for that we’re thankful. Check out his convention speech in our July 21st podcast at the 38 minute mark.

We missed this in our article about silver linings from the 2022 election, and the least we can do is make up for it by naming it to the best list. For the uninitiated, Round Rock is in suburban Williamson County - immediately north of Austin - and until recently was a bastion of conservative politics. Not anymore. The people organizing on the ground have made Wilco a quintessential swing county and have dared to step into one of the most important - and most crazy - political fights of our time. Yeah we’re talking about right wingers trying to take over school boards, pushing book banning, and more. With a slate of far-right candidates seeking to take over the Round Rock ISD, a group called Access Education Round Rock stood up, organized - and won. This is a fight that’s indicative of a broader fight happening all around the state and if they can do it Round Rock, you can do it your area, too.

Online activist Olivia Juilianna has been known to prolifically stand up for progressive values, but that escalated when Congressman Matt Gaetz from Florida made disparaging comments about her. Not one to back down from a fight, she used the spotlight to organize for abortion funds and call out Republicans for bad politics and bad behavior. She’s taken her activism to the national level proving that both she and Gen Z are political forces to be reckoned with. We look forward to seeing what’s next for her in 2023 and beyond.

Cities cannot change state laws - but they can instruct law enforcement to deprioritize certain laws over others. That’s where the GRACE Act comes in (Guarding the Right to Abortion Care for Everyone). Passed in Austin, Dallas, and Denton, and modeled after marijuana decriminalization laws, the GRACE Act is a local ordinance in which cities instruct law enforcement to “deprioritize” enforcement of state abortion laws. And it’s not just Texas - cities around the country are taking up the initiative as well: Atlanta, Nashville, New Orleans, and more. Shout out to Jenna Hanes for making this issue big this year.

Honorable mentions: Our appreciation to the statewide Democratic candidates. Running for office is tough, and running statewide down-ballot - and for offices that often end in the word “commissioner” - is even tougher. Our hats off to Rochelle Garza, Mike Collier, Susan Hays, Janet Dudding, Luke Warford, and every judicial and State Board of Education candidate that ran in 2022.

What more can we say that hasn’t already been said? We have many beefs with the governor but our primary issue this year is his complete lack of a response to gun violence after the Uvalde shooting. It’s inexcusable that he can spend billions on border stunts and calls special sessions on voter suppression and abortion yet do absolutely nothing on guns. Add to that, he’s just plain mean. We chronicled our issues with him here just before the election, but sadly we are stuck with him for another term.

It’s really saying something when a guy who wasn’t even up for election this year manages to make it on the worst list, yet Ted Cruz always finds a way. He took a tone-deaf approach to guns after Uvalde, and made an ass of himself during confirmation hearings of the first black woman to be a Supreme Court justice. And yet one of the most egregious offenses this year was him voting against a first responders bill - after he voted for it - by lying about what was in it. We’ll leave you with the immortal words of Jon Stewart who said: “Ted Fucking Cruz! This is bullshit.”

Did anyone study World War II history? Or at least see Indiana Jones part 3? It’s ironic that many of the same people who profess a need for “free speech!” are also against books they disagree with, but it’s not surprising. And yet Texas has banned more books than any other state, and so far that totals more than 800. Many of the people behind these bans are running for public office (including the aforementioned school boards), but another irony here is that telling kids they can’t have something is a sure way to get them to seek it out. Because if they ain’t on the shelf - they’re on the internet.

We begrudgingly list him as a Texan, but hey our state didn’t choose him - he chose us. He seemingly did the impossible this year: he made Twitter worse. He’s a bad employer, lacks self awareness, exhibits erratic behavior, and wants comedy to be “legal on twitter” even though he can’t take a joke. And he’s all in favor of free speech except speech parodying him! Maybe Twitter will be worth as little as dogecoin at this time next year, and maybe we’ll all be better off for it.

This list unsurprisingly includes Attorney General Ken Paxton, Lt. Governor Dan Patrick and (at least) 19 Republican members of Congress. But they know they are lying, which might mean they are coming to their senses… that is if they have any sense.

Dishonorable mention: Herschel Walker who moved from Texas to Georgia to run for the US Senate, and then told a group of voters “I live in Texas.” Tell ya what Georgia, send him back to us and we’ll give ya Elon. Deal?

ALL OF OUR LISTS!

As promised, below is a bonanza of lists from the past decade. Walk with us down memory lane, gasp at the offenses of the past, and marvel at just how many politicians show up as often as David S. Pumpkins…