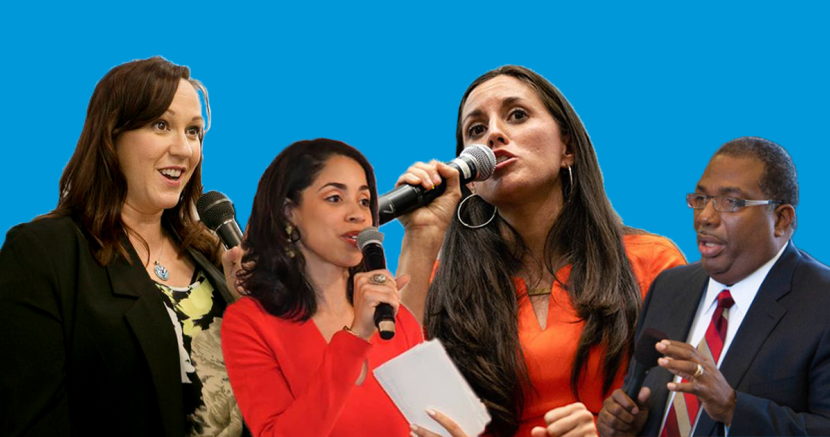 Wesley Story
Though the Senate candidates disagreed on some of the issues, they did agree on one thing: John Cornyn has got to go.

On Tuesday, 11 of the 12 Democratic candidates running to challenge Republican U.S. Sen. John Cornyn took the stage for a debate in Austin.

Here are six takeaways from the night:

Candidates were asked about progressivism and whether Texas voters will support a more progressive candidate over a more moderate candidate.

This was an odd question considering the rest of the debate centered around progressive issues including common-sense gun reform, fighting climate change, expanding access to health care, protecting voting rights, and more. Progressive issues are mainstream issues and the debate proved it. Texans are ready to elect a senator who embraces progressive values and leads with conviction.

Candidates are being asked about progressivism & whether Texas voters will support a more progressive candidate over a more moderate candidate.

The fact is, progressive issues are mainstream issues. Democrats should be leading with values & conviction.https://t.co/sHusjDNMXb

Cornyn has an A+ rating from the NRA,  consistently votes against common sense gun reform legislation, and takes money from gun lobbyists and corporate interests. Meanwhile, a majority of Texans want and need gun reform.

Texans want candidates who support things like passing universal background checks and ‘red flag’ laws, as well as stopping straw purchases and the sale of assault weapons. We know gun violence is preventable, and we need a senator who fights to keep all Texans safe!

While the candidates discuss their plans to address gun violence, just a reminder that @JohnCornyn has an A+ rating from the NRA. He consistently votes against common sense gun reform legislation and takes $$$ from the NRA. #GunReformNow https://t.co/9wz8rOQHKw

3. Texas should be a leader in the fight against climate change.

Nobody should understand the urgency of the climate crisis more than Texans. By tapping into the wealth of alternative energy sources available, Texas has the potential to help lead in the transition to clean energy and the shift to more sustainable practices.

Moving forward, it is up to Texans to elect lawmakers that support bold, progressive policies that will help save our planet. We cannot continue down this path any longer. Now is the time to take action!

U.S. Senator @JohnCornyn has been in office for nearly two decades, but polls show that a majority of Texans either don’t know him or don’t like him.

It's time we elect a new senator who actually fights for ALL Texans. #txsen https://t.co/7nADN2Vm9r

All of the Democratic U.S. Senate candidates support expanding health care access, but they differ in their approach. Texas has the highest uninsured rate in the nation and GOP lawmakers continue to attack the Affordable Care Act in an effort to take away health care from millions and remove protections for people with pre-existing conditions.

This attack on health care must end. Health care is a human right and our state needs a senator who will not rest until all Texans are insured and can access the health care they need.

We need a senator who believes #healthcare is a human right & fights so ALL Texans can access the health care they need.https://t.co/F3iFP0ivUY

Cornyn has been in office for nearly two decades, but polls show that a majority of Texans either don’t know him or don’t like him.

Texans deserve a senator who will go to Washington DC & fight for our best interests.

Cornyn has proven he is not the right person for the job. Time and time again, he puts an impeached president before our country. In 2020, he’s got to go. #txsenhttps://t.co/4hSCEE6APc

Early voting in the Texas primary began on Tuesday and lasts through Feb. 28. Election Day is March 3.

Texas voters have the opportunity to use their voice and decide which candidates will make it onto the ballot in November. We must ALL get out and vote!

And with that, the Senate debate comes to an end!

Remember that #EarlyVoting in the Texas primary has already begun and runs through Feb. 28. #ElectionDay is March 3rd.

Visit https://t.co/QXC8WLvTdn for information on how and where to vote. See you at the polls! #VoteTexas pic.twitter.com/AVi33bbKqX

The 11 candidates attending the debate included: