Climate change exists and Texas must lead the fight against it 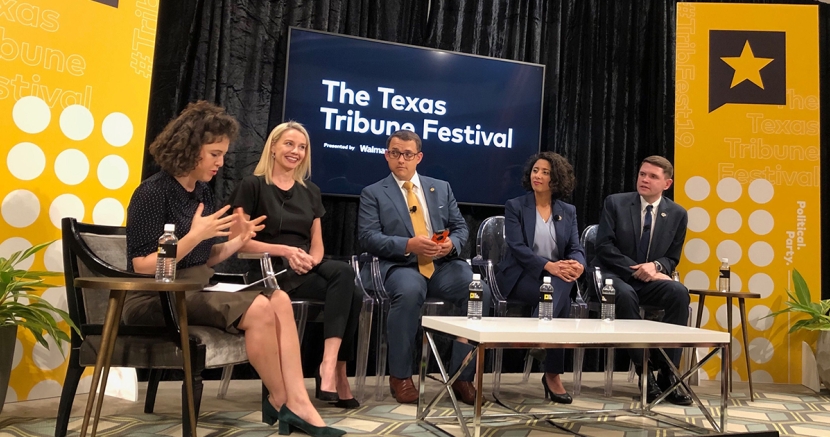 During The Texas Tribune's annual Tribune Festival, a 12-year-old student expressed his concerns about climate change to a group of young Texas lawmakers at a panel entitled “Coming of Age.”

His genuine and justifiable fear was met with a dismissive attitude and ignorance from one particular Texas GOP representative: Briscoe Cain (R-Deer Park).

The young boy asked the panel what they plan to do about climate change.

While progressives on the panel like Rep. James Talarico (D-Round Rock) and Judge Lina Hidalgo (D-Houston) spoke on the issue in a meaningful way, Cain chose instead to insult the young man’s intelligence and try to gaslight the audience.

.@JudgeHidalgo says she is accepting and including #ClimateChange proposals in how they plan for flooding in Harris County. #FlippingTexas #TribFest19

Cain’s response? “It’s going to be OK.” Cain then went on to criticize 16-year-old climate activist Greta Thunberg and expressed that he doesn’t believe in the impact of climate change.

Our message for Briscoe Cain is simple: Climate change exists and whether you choose to believe in it or not, it’s not going anywhere. Texas must lead the fight against the climate crisis.

The climate crisis is not going away.

Texas Republicans are doing younger generations a great disservice by acting like this problem is nonexistent.

The world’s leading climate scientists have warned that we only have 12 years to limit climate change catastrophe. They’ve said that urgent and unprecedented changes are needed and that our planet is at great risk. Ecosystems are collapsing. People are dying. And our planet is at the beginning of a mass extinction.

This is not an issue that can be brushed aside. Attempts by politicians to ignore the reality will no longer be accepted by the much more educated and worried masses.

Young people know that the more we ignore the science and the warnings, the harder it will be for future generations to overcome the climate crisis. The time to act was long ago, but it’s not too late for change.

Young people are leading the fight, but they shouldn’t have to do it alone.

Because of older generations’ unwillingness to act, young people have had to give up their childhoods and bear the burden of fighting for a livable planet.

Young people like Greta Thunberg, Helena Gualinga, Isra Hirsi, and many other youth activists have chosen to step up because world leaders would not. The climate movement is being led by young women, people of color, and indigenous youth who have been at the forefront of this fight for years.

These young activists are tired of the lies they’ve been told, just like those being told to Texans by our lawmakers. These activists are instead fighting for the truth, and for change. And in the process, they’re trying to convince world leaders to take responsibility for the planet’s health.

At the recent UN Climate Summit, Thunberg addressed many of these issues in a speech.

“There will not be any solutions or plans presented in line with these figures here today, because these numbers are too uncomfortable. And you are still not mature enough to tell it like it is.

You are failing us. But the young people are starting to understand your betrayal. The eyes of all future generations are upon you. And if you choose to fail us, I say: We will never forgive you.

We will not let you get away with this. Right here, right now is where we draw the line. The world is waking up. And change is coming, whether you like it or not.”

While this speech was directed at world leaders attending the summit, its message prevails and could just as easily be a plea for Texas lawmakers to finally take action.

It’s time for Texas to wake up and smell the petroleum.

Nobody should understand the urgency of this issue more than Texans.

Climate change is a real and serious threat that is causing drought, crop failure, heat waves, extreme hurricanes, torrential storms, and extreme climate events across our nation. Here in Texas, we have witnessed the dramatic impact climate change can have on our lives.

Texas can and should be a leader in fighting climate change. By tapping into the wealth of alternative energy sources available, Texas has the potential to help lead in the transition to clean energy and the shift to more sustainable practices.

Every person has the right to clean air, safe water, and a healthy environment. The only way to ensure that right is by taking bold and ambitious action to fight climate change before it is too late.

Our state has great influence in this area, but our leaders refuse to act. Moving forward, it is up to Texans to elect lawmakers that support bold, progressive policies that will help save our planet. We cannot continue down our current path any longer.

Now is the time to take action.