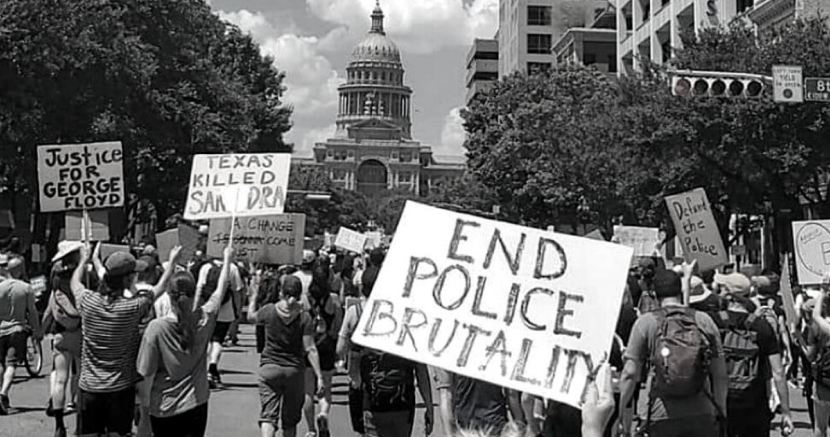 Abby Springs
Criminal justice reforms have been weakened or stalled in committee, and partisanship has prevented any from bearing Floyd’s name.

We are one year out from the murder of George Floyd by the hands of a police officer in Minneanapolis, Minnesota. A Texas native, Floyd’s death in 2020 sparked nationwide calls for police accountability and racial justice. Texans across the state marched to demand change — change that had the potential to materialize at the 87th legislative session.

But as the 2021 regular meeting of the Texas legislature draws to a close, progress on police reform and racial justice has been disappointingly slow to many lawmakers and activists.

Despite Governor Greg Abbott’s call to “to make sure that we prevent police brutality like (Floyd’s death) from happening in the future in Texas,” only a few of the proposals put forth by the Texas Legislative Black Caucus have made progress in the legislature. Instead, far-right leaders have prioritized legislation that further entrenches systemic racism and harms communities of color in Texas.

When the legislature began in January, some legislators hit the ground running to tackle the urgent issues of criminal justice and police reform. Authored by Rep. Senfronia Thompson and Sen. Royce West, the George Floyd Act is sweeping legislation to prevent police brutality and address systemic racism. The major provisions include ending qualified immunity and prohibiting officer chokeholds. But despite the necessary changes and wide support, it won’t pass this session.

Instead, parts of the George Floyd Act have passed as separate bills that would require more substantive disciplinary actions for police, limit arrests for traffic offenses, and require corroboration for an officer’s undercover testimony. While they’re steps in the right direction, petty partisanship means that none of these bills will bear Floyd's name.

“When I began to look at the George Floyd bill, which was the seminal piece of criminal justice legislation, we were not able to get traction on it, in terms of passing anything with George Floyd’s name on it. So therefore, you have to decide whether you want form over substance. In this instance you have to take form, because you don’t have the votes.” - Sen. Royce West

Another major criminal justice bill includes the Botham Jean Act, or Bo’s Law. Botham Jean was shot and killed by an off-duty Dallas police officer in 2018. The bill, which has already been voted out of the House, requires police to keep their body cameras active for the duration of an investigation. However, legislators have stripped provisions that clarify the Castle Doctrine and establish state penalties for officers who do not wear a body camera. As a result, some activists and the lawyer for Jean’s family have expressed disappointment in the final version of the bill.

While they have been weakened, parts of the George Floyd Act and Bo’s Law are passing in some form. However, other criminal justice bills have died before they could even get a debate. These include the Breonna Taylor Bill, which would ban no-knock warrants, and the Brandon Saenz Act, which would outlaw dangerous crowd-control devices like tear gas and smoke grenades. Overall, this session has been a fairly disappointing one for those hoping to see progress on criminal justice and police reform.

“I don’t think that we took the time to address the needs of the people in Texas and that’s all people. And with Texas having more Black Americans than any other state, it’s pretty much an embarrassment that our response to the protests was to beat up on protesters instead of addressing the catalyst for the protests in the first place. We refuse to address any police reforms because police reform seemingly in the Capitol is like a bad phrase.” - Rep. Jasmine Crockett

GOP leaders out of touch with Texans

While hard-working legislators have fought for needed racial justice legislation, Republicans on the other side of the aisle are on the offensive against Texans. They’ve refused to tackle inequalities like Black maternal mortality and ignored calls to address the impact of COVID-19 on communities of color. In other cases, they’re entrenching the same systemic racism in our political system that we should be working to eliminate.

Senate Bill 7, for example, is an omnibus voter suppression bill that will largely target Black and Brown voters in urban areas by cutting down on polling places and empowering partisan poll watchers. The 6-week abortion ban, SB8, will disproportionately impact women of color and low-income Texans. Other bills directly attack police reform, like the bill that would ban cities from reallocating money from their police budgets without voter approval. And then there’s HB 3979, which bans public schools from teaching students about racism in Texas history.

While GOP leaders have been moving in the wrong direction on these issues, they’ve also been moving out of step with the values and beliefs of most Texans. An overwhelming majority of Texans believe that police brutality is a serious problem and that police need to reform their use-of-force practices, while a growing percentage of Texans have favorable views of the Black Lives Matter movement. And as we remember George Floyd a year after his death, we can also remember the thousands that came out and marched for racial justice across the state.

Texans know that Black lives matter. It’s time for leaders at the Texas legislature to believe it too. We already have legislators championing full, comprehensive police reform and solutions to racial inequality in Texas. When the next session comes around, let’s make sure they’re in charge.