Voter Suppression Bill SB 7: Where it’s been, where it’s at, and where it’s going 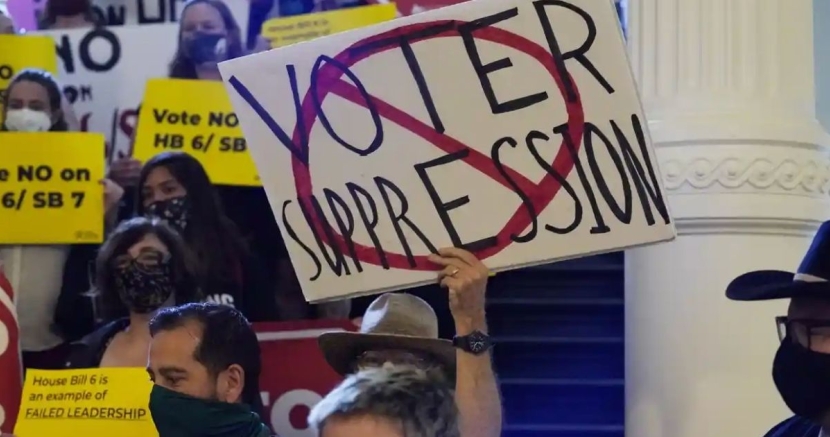 Image Credit
Eric Gay/AP
Abby Springs
After many changes, here’s what’s in the discriminatory bill at this point.

With the 87th legislative session finally drawing to a close, Republicans are moving forward with the culmination of their voter suppression efforts this year — Senate Bill 7.

It’s a massive, omnibus anti-democracy bill that limits voting rights for Texans across the state. From the start of the session, SB 7 was a priority for Gov. Abbott, Lt. Gov. Dan Patrick, and other Republican leaders, despite a massive pandemic and an energy crisis to manage. And it seems that they’ve achieved their goal: ignore all of Texas’s real problems to legislate against the hard fought and constitutional right to vote.

This session has exposed the extreme lengths the GOP will go to hold on to power and suppress the votes of Texans of color.Don’t call Republicans the party of constitutional rights, because they’re content ignoring the 14th and 15th Amendments when it comes to ballot access.

Don’t call them the party of big business, either. Dozens of major Texas companies, from American Airlines to Dell, came out in opposition to voter suppression bills like SB 7. One study showed that our state stands to lose $31 billion and 223,000 jobs by passing anti-democracy legislation. But Republicans don’t seem to care about our economy after all.

SB 7 passed in the Texas Senate and the Texas House, but it’s currently back in the Senate again. That’s because the House changed the language of the bill, so the Senate can decide to accept the bill as is or form a conference committee to work out the differences. Once they agree, SB 7 will head to Gov. Abbott’s desk where he’ll sign the legislation into law.

When Republicans authored SB 7, they tried jamming in as much voter suppression as they possibly could. Fortunately, House Democrats got some provisions taken out of the bill during debate, but it still contains nasty voter suppression measures such as:

On the bright side, Democrats added some positive amendments to the bill that would:

Even after these changes, SB 7 is still an extreme voter suppression bill and we should all be opposed to its passage.

The bill can still change in the conference committee, and the positive provisions that Democrats added could get taken out. Republicans could also add some voting restrictions back into the bill — we’ve just got to wait and see how it plays out until the end of session.

How did we get here in the first place?

Since the start of the session, Republicans have turned the state legislature into a circus of mismanagement and far-right extremism. We knew it was going to be bad when Briscoe Cain, who literally helped Trump try to overturn 2020 election results, was picked to be chair of the Elections Committee by House Speaker Dade Phelan. But Cain’s incompetence surpassed even our lowest expectations.

Under his management, the Elections Committee hearings made a mockery of the legislative process. First, Cain screwed up parliamentary procedure by accidentally recessing his committee, forcing hundreds of voting rights advocates to leave, and he spoke over his colleagues of color in the process. Then, he snuck through SB 7 with no notice, no testimony, and no debate, replacing the bill’s text with language from HB 6, the voter suppression bill that he authored.

Once the bill hit the House floor, Democrats fought hard to weaken its language. That included a viral moment where Rep. Anchía grilled Cain on the Jim Crow history of the “purity of the ballot box” language that was included in the bill. Spoiler alert: Cain had no idea what he was talking about.

"Purity of the ballot box” was a term drafted specifically to disenfranchise Black voters following the Civil War. This justification was used again during the Jim Crow Era. And today, this lie was resurrected in the #txlege to justify #SB7. Full clip: https://t.co/aYq4bHcNG7 pic.twitter.com/l9rEAThIkz

When the debate finally finished at 3 a.m., the Texas House passed SB 7 on a party-line vote under the cover of darkness.

So, what’s next for Texas voters?

Senate Bill 7 is just one of hundreds of voter suppression bills being pushed in state legislatures across the country. Trump may have lost the presidency, but the Republican Party is still pushing his Big Lie of voter fraud in the 2020 election. SB 7 is just an extension of the GOP’s desperate crusade to hold onto power as their share of the electorate declines each day.

Even if SB 7 becomes law, hope is not over yet for Texas voters. Harris County is already preparing to sue over bills that restrict voting access, and as Rep. Martinez Fischer said on the House floor, “You may have your vote, you have your majority. But guess what, I look forward to seeing you in federal court … So please do not delete any emails.”

We need help from allies at the national level

Texans have fought long and hard against SB 7, and it’s because of the hard work of voting rights advocates that the bill is no longer as bad as it once was. But we’ve still got work to do to protect ballot access in our state. So saddle up, put on your boots, call your legislators, and share this article to keep up the fight to protect voting rights for all Texans.