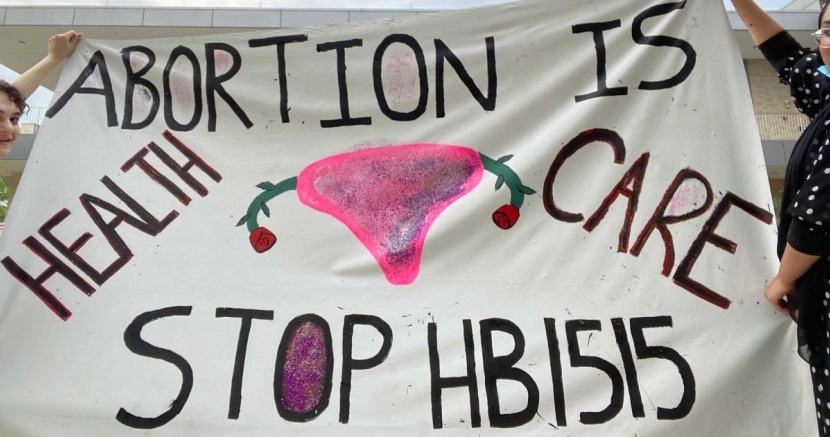 Deeds Not Words University of Houston Chapter
SB8/HB1515 is in direct conflict with federal law, no matter how anti-abortion extremists try to spin it.

In the myriad of anti-abortion bills that have come through the Texas Legislature, House Bill 1515 (and its companion Senate Bill 8) is by far one of the worst.

The bill is one of Lt. Gov. Dan Patrick’s top priority bills, and would ban abortion at six weeks gestation, before many people even know that they are pregnant. SB 8/HB 1515 would also allow anyone to sue an abortion provider or anyone who helps someone obtain an abortion in Texas. It is one of the most extreme six-week abortion bans in the entire nation, and its extremes extend even further than that.

If passed, SB 8/HB 1515 would allow anyone, regardless of any affiliation to the individual seeking an abortion, the right to sue on behalf of “aiding and abbeting” the performance of an abortion. This means anyone, even those who do not reside in Texas, would have the ability to target and sue anyone they believe helped provide abortion care in Texas. Physicians, nurses, clinic staff, family members, friends, clergy, domestic violence and rape crisis counselors, or even abortion funds and clinics could all be potentially targeted and could face civil liabilties if SB 8/HB 1515 is passed.

When the bill was first heard for public testimony in the House Public Health Committee on April 7th, Rep. Nicole Collier questioned an attorney, who spoke in support of SB 8/HB 1515, about whether the bill would allow a rapist to sue their victim’s doctor if they performed an abortion. It took some time, but eventually the attorney finally admitted that yes, the rapist could sue. And if that wasn't already terrifying enough, the rapist could potentially reap a cash reward if the lawsuit is successful.

It's loud and clear. Lawmakers are going to the extreme to ban abortion in Texas. #TXLege #TXDeservesBetter pic.twitter.com/iplidiG6Fx

Not only is this abortion ban morally egregious, it’s unconstitutional.

In every state where an abortion ban bill of a similar nature has been passed, it has been challenged at the federal court level. In July of 2020, Georgia’s six-week abortion ban, which was enacted in 2019, was struck down by the federal district courts in the verdict of Sistersong v. Kemp. The Georgia law thankfully never took effect since the federal district court issued a preliminary injunction blocking it in response to the lawsuit. This verdict came one day after the Tenessee law banning abortion at every state of pregnancy and as early as six weeks was blocked by a preliminary injunction until the case Memphis Center for Reproductive v. Herbert H. Slatery is resolved.

In February of 2020, the 5th Circuit Court of Appeals agreed with the verdict of a district court judge in the case of Jackson Women’s Health Organization v. Thomas E. Dobbs, which blocked a Mississippi law that banned abortion as early as six weeks. The appeals court found that the Mississippi six-week abortion ban law is unconstitutional because it would ban “abortion before the point of viability, when a fetus could survive outside of the womb.”

Georgia, Mississippi, and Tennesee are all a part of several states that have passed laws banning abortion in 2019. Alabama, Kentucky, Louisiana, Ohio, Missouri, Utah and Arkansas have all passed six, eight, or 18-week bans, all of which have either been temporarily blocked by courts or challenged before their effective date.

Recently, 370 Texas attorneys, elected officials, former judges and law professors signed on to an open letter in opposition to the passage of HB 1515, directed to the Speaker of the Texas House Dade Phelan. The letter said:

“This bill would not only create a new unconstitutional restriction on abortion, but also extend this extraordinary cause of action to all twenty-eight requirements placed on   abortion providers in Chapter 171 of the Health and Safety Code. SB 8 and HB 1515 contravene the Texas Constitution and undermine long standing rules and tenets of our civil legal system. Because we believe that all Texans deserve a fair, efficient, and predictable court system, we ask that you oppose these bills...”

Every aspect of SB 8/HB 1515 is in direct violation of not only morality but federal law that affirms abortion is legal. Just the mere consideration of this bill is a waste of state resources and energy that could be spent on legislation that would actually be beneficial to Texans.

While millions of Texans have suffered from the effects of the COVID-19 pandemic, and nearly 200 have died from the winter freeze, Texas Republicans have decided their extreme anti-abortion agenda is more important than the lives of Texans.

You can take action by calling or emailing your representative and telling them to oppose SB 8/HB 1515: http://bit.ly/FindTXRep