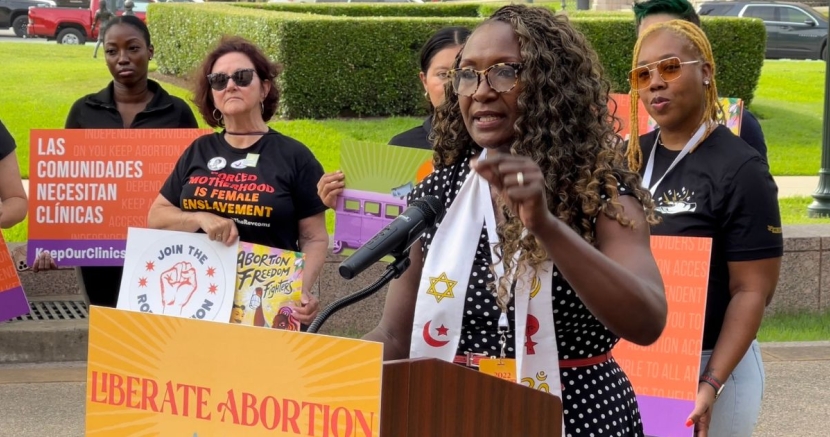 Emily Clark
The abortion justice caravan is on its way to Jackson, Mississippi.

The Supreme Court of the United States could overturn Roe v. Wade any day now. Every few days in June, they release rulings on cases they’ve heard and while we’ve been keeping our eyes on a number of those decisions, Dobbs v. Jackson is the one that will decide the future of our reproductive rights.

The closer our loss of freedom gets, the more our fight for abortion justice must accelerate. This week, Progress Texas, Liberate Abortion, and other abortion rights organizations met at the Texas Supreme Court to kick off the Liberate Abortion Caravan.

Traveling from Austin to Houston and then to Jackson, Mississippi, the caravan is intended to raise the alarm about the abortion crisis leading up to the decision that will likely overturn Roe.

Texas triggered the abortion ban trend that has infected nearly every Republican-led state in the past year. That’s why the caravan is traveling to the heart of communities most affected by extremist abortion laws. At each stop, Liberate Abortion and other abortion justice partners will host events and actions including rallies, advocacy efforts, press conferences, and more.

Progress Texas Advocacy Director Diana Gómez emceed the event and began by highlighting the importance of the fight for abortion justice.

“We are bringing our voices together on this caravan to demand that our leaders take bold action to protect and expand abortion access. We are the majority. Most Texans support abortion access and together, abortion supporters have the strength to form a massive resistance.

“We have the political power to turn the tides on the fight for abortion access and make politicians regret ever going after our bodily autonomy. We cannot sit idle while this unconscionable rollback of fundamental rights accelerates.

Gómez followed her opening with a moment of silence for the nineteen children and two teachers killed at Robb Elementary School in Uvalde, Texas.

“Gun violence is also a reproductive justice issue because Texans and folks everywhere should have the human right to maintain bodily autonomy, have children, not have children, and parent the children we have in safe and healthy communities.”

This event was just the start, but there’s a long fight ahead as we await the Supreme Court’s decision in Dobbs v. Jackson. For updates and to find opportunities for action, follow Progress Texas on Twitter, Instagram, and Facebook.

Join the ROEvolution and pledge to vote for candidates who unapologetically support abortion access at roevolution.org.