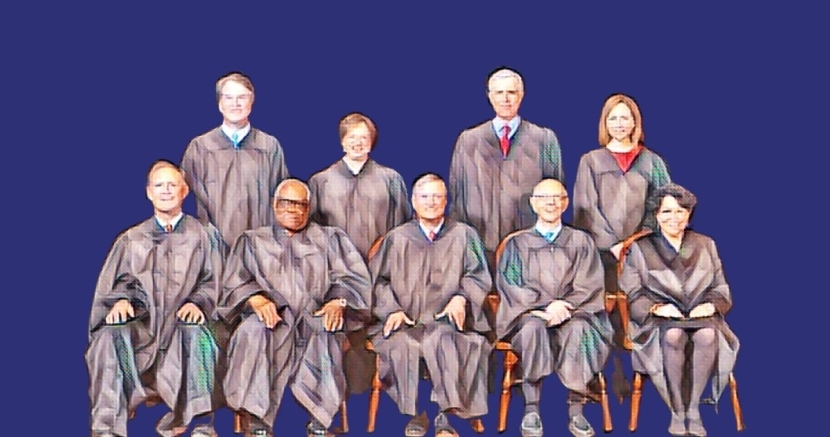 The United States Supreme Court is set to decide on cases that will change our entire country. Everything from abortion rights and gun laws to our ability to hold law enforcement officers accountable is under scrutiny.

This case will decide whether Mississippi’s law banning nearly all abortions after 15 weeks’ is unconstitutional. If SCOTUS sides with Mississippi, they will overturn 50 years of precedent established by Roe v. Wade and trigger abortion bans across the nation. The courts have sided with abortion justice in the past, but now that SCOTUS has a conservative majority, our reproductive rights are being stolen from us.

This case began when the North Carolina NAACP chapter filed a suit challenging the state’s voter-ID law, arguing the law violates the Constitution and the federal Voting Rights Act. Even though North Carolina Attorney General Josh Stein, a Democrat, has defended the voter-ID law while representing the state, Republican state legislators Phil Berger and Tim Moore want to intervene to defend the law on the basis of “inadequate representation.” Courts denied their request since their opinion does not differ from that of the AG.

In this case, the court will determine whether the Biden administration is required to maintain Trump-era Migrant Protection Protocols, which force asylum-seekers to wait in Mexico while their cases are decided. Between 2019 and 2021, Human Rights First recorded over 1,500 cases of rapes, killings, and kidnappings of the migrants sent to wait in Mexico.

The Department of Homeland Security tried to end the “remain in Mexico” policy last year, citing its lack of effectiveness and long-term viability. This case is important because it will further define the limits of authority by presidents to change policies instituted by previous administrations. The ruling would also establish limits on presidential power regarding immigration policy.

In 2018, Border Patrol agent Erik Egbert stopped U.S. citizen Robert Boule, searched his car, and asked him questions about his inn on the U.S.-Canada border. Later, when Boule was greeting a guest from Turkey, Egbert returned and demanded to search his vehicle again. When Boule refused and requested a warrant, Egbert responded by shoving Boule against the car and throwing him to the ground.

This ruling will decide whether people have a right to sue federal officers when their First and Fourth amendment rights are violated. If the Court rules in favor of Egbert, it will be exponentially more difficult to hold law enforcement accountable for their actions.

This case will determine whether asylum-seekers are entitled to bond hearings after six months of detention. Individuals are often held in detention centers for weeks, months, and even years at a time while they wait for a decision on their case, clearly violating their right to due process.

If the court rules in favor of asylum-seekers, after six months of detention, migrants will have the option to be released on bond unless they are deemed a flight risk or a danger to the community.

Education / Separation of Church and State

The ruling in this case will determine whether states can use taxpayer dollars to sponsor non-public, religious schools. Gov. Greg Abbott and other GOP state governors have expressed interest in extending school vouchers to private schools should the Court allow it. Diverting funding away from public schools will only exacerbate an already dire public education crisis, forcing more teachers out of the field due to low pay and lack of resources.

For decades, the Establishment Clause of the First Amendment has prohibited public schools from promoting religious beliefs or organizing, encouraging, or leading prayer among students. These prohibitions are often violated, like in the case of high school football coach Joseph Kennedy, who led team prayers before and after games for years before his school district caught wind and requested him to cease.

Though Kennedy was offered “various accommodations that would have allowed him to pray without religiously coercing students,” he continued to lead team prayers, citing the request by the district violated his First Amendment rights. While challenges to religious prohibitions in schools aren’t unprecedented, if the court rules in favor of Kennedy, this case could blur the lines between church and state.

This case will decide whether New York’s law limiting concealed-carry licenses to those demonstrating a special need for self-defense violates the Second Amendment. The suit came after New York residents Robert Nash and Brandon Koch applied for gun licenses, but were only permitted licenses for hunting and target shooting, not for concealed carry in public spaces.

The two felt this violated their Second Amendment rights even though the law was created in the interest of the public’s safety.

We’ve seen gun violence consume our nation, leaving nothing but devastation, trauma, and tragedy in its wake. Americans deserve to learn and live without fear, and New York’s law is a step toward that. If the Court rules in favor gun lobbyists, our nation’s gun violence crisis will only intensify.

After both laws were passed, Carlos Concepcion, previously sentenced to 19 years in prison for possession of crack cocaine, requested a resentencing. The lower courts denied his request. If SCOTUS rules against Concepcion, they could be setting a precedent for continued racial discrimination in drug-related cases and perpetuate incongruent sentencing through the use of outdated laws.

This case will determine whether a person can sue a police officer for using statements in court that were obtained prior to a Miranda warning. The Fifth Amendment protects us against self-incrimination and requires officers to explain these rights to us prior to obtaining a statement.

While at work, Terence Tekoh was accused of sexual assault and officer Carlos Vega was brought in to question him. Vega failed to explain Tekoh’s rights before doing so and coerced a confession out of him. If law enforcement officers aren’t held accountable for denying people their rights, such practices will only continue.

The Eighth Amendment ban on cruel and unusual punishment is vital in protecting our human rights and maintaining a healthy democracy. We know capital punishment in and of itself is cruel and unusual, denies people due process of law, violates the constitutional guarantee of equal protection, and is not a viable form of crime control.

Michael Nance was sentenced to death in 1997 for robbing a bank and killing a person while fleeing and, in waiting out the sentence, has developed health conditions that would make execution by lethal injection cruel and unusual. Nance filed a request that his method of execution be changed to firing squad, but, since that method is not currently used in Georgia, courts have denied his request thus far.

This case will decide whether a death-row prisoner can challenge a state’s proposed method of execution when the alternative method of execution is not presently authorized under state law. If SCOTUS rules against Nance, they will open the door for forms of cruelty that the Constitution was designed to prevent.

In this case, the Court will decide whether the Environmental Protection Agency (EPA), under the Clean Air Act, has the authority to broadly regulate greenhouse gas emissions. Republican attorneys general are arguing that such power should be delegated to Congress, not a knowledgeable, bureaucratic agency such as the EPA. Given the rapid acceleration of climate change, shifting this authority to Congress  (which is an already slow-moving branch of government) could have devastating effects on our planet.