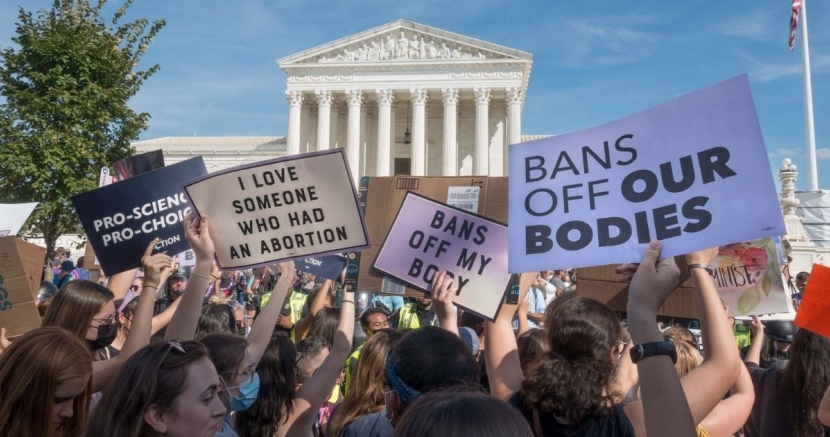 Arabella Cadena
The U.S. Supreme Court is taking up one of the most consequential abortion rights cases in decades.

In Mississippi, abortion care has always been difficult to access. Jackson Women’s Health Organization, dubbed The Pink House for its bubblegum pink exterior, is the only abortion clinic in the state. Mississippi requires in-person counseling and a 24-hour waiting period before receiving an abortion, which means repeat trips to the lone clinic. Additionally, it is the only state in the country that requires abortion providers to be board-certified or board-eligible OB/GYNs. In 2018, Mississippi was placed at the forefront of the fight to protect Roe v. Wade when it passed HB 1510, a 15-week abortion ban.

Dobbs v. Jackson Women’s Health Organization (JWHO) is the first time that the Supreme Court will revisit the viability standard established by Roe v. Wade almost 50 years ago. The standard states that a person has a constitutional right to an abortion until the point when a fetus could survive outside the womb, around 24 weeks of pregnancy. Nineteen years after Roe, the court affirmed this constitutional right in Planned Parenthood v. Casey and instituted the ‘undue burden’ test. The test allows states to restrict (not outright ban) pre-viability abortion as long as it does not present a substantial obstacle or undue burden in obtaining an abortion. In 2016, Whole Woman’s Health v. Hellerstedt upheld the undue burden standard. There is precedent, built upon precedent, that pre-viability abortion bans are unconstitutional.

This is why after a JWHO doctor filed a lawsuit in federal district court challenging the ban, the court blocked the state from enforcing the law. It’s also why even the conservative U.S. Court of Appeals for the Fifth Circuit upheld this decision. It is why the Supreme Court should never have taken up the case. Nevertheless, on May 17th, the 6-3 conservative majority Supreme Court agreed to take up the abortion case. Oral arguments were set for December 1st, 2021. You can listen to a live feed of the arguments here.

The formal question presented before the Supreme Court is whether all pre-viability prohibitions on elective abortion are unconstitutional. Mississippi’s argument will explicitly ask the Court to overturn Roe and Casey. The state asserts that the decisions made in the two landmark Supreme Court cases were ‘egregiously wrong’ and based on assumptions that are out of date. Jackson Women’s Health Clinic will refute this assertion, stating the heart of Roe and Casey is that the right to an abortion has deep constitutional roots in the fundamental rights to bodily integrity and personal autonomy.

The Supreme Court's decision to uphold or overturn Mississippi’s 15-week ban will have reverberations across the country. According to the Guttmacher Institute, 26 states are certain or likely to ban abortion if Roe is overturned. Texas, and 12 other states, have trigger laws in place that will immediately ban abortion. Additionally, the fates of a number of similar abortion bans hinge on the outcome of Dobbs v. Jackson Women’s Health Organization, including the six-week Texas abortion ban (SB 8) and a 15-week ban in Louisiana.

The constitutional right to an abortion isn’t the only thing at stake. Not only is access to an abortion guaranteed by decades of precedent, but a majority of Americans think that abortion should be legal in all or most cases. There really is no legitimate reason for abortion access to be on the chopping block.

The Supreme Court agreeing to hear arguments over this blatantly unconstitutional law signals that the stacked court will hear test cases on any political agenda they see fit. Overturning Roe threatens our fundamental rights, including the right to use contraception, whom we decide to marry, and how we raise our children. This is a threat to all of us and our right to live with autonomy, dignity, and equality.

Roe must be protected, but legality has always been the floor for ensuring reproductive autonomy. People of color, the disabled, those who are low-income, and other marginalized communities have always struggled to access essential reproductive health services, even after Roe. Now is the time to speak out and support people on the ground, in Mississippi, and across the country.