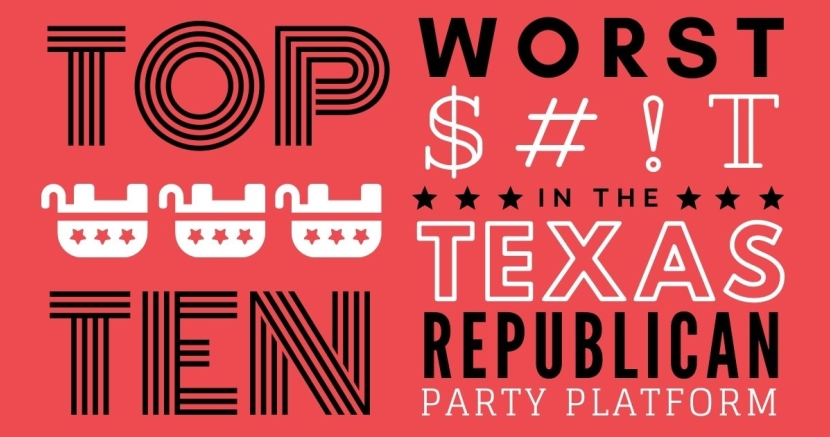 Emily Clark
We read it so you don’t have to!

The Texas Republican Party spent Juneteenth weekend, ironically, finalizing one of the most racist, sexist, homophobic, transphobic, and ageist platforms we’ve seen in recent years. That’s saying a lot, because many of the planks are repeats from their 2016 and 2018 platforms. Two themes are clear this year: conspiracy and regression.

From formally rejecting President Biden’s 2020 win to outlawing LGBTQ+ marriage, the Texas GOP has unabashedly solidified their swing to the far-right. To save you the queasiness that comes from reading all 40 pages of hateful text, here’s a brief rundown of their 2022 platform:

Look up the definition of sore loser in any dictionary and you might find a red elephant.

Despite over two years in office, a 51.3% to 46.8% win, and no evidence of widespread voter fraud, the Texas GOP is claiming Biden’s win null. They even go so far as to refer to Biden as “acting president,” with some delegates subscribing to the Qanon theory that Trump will be re-installed as president “by the end of the year.” The “Big Lie” has gotten out of control amongst the Republican Party. What happened on January 6, 2021 is evidence enough of that.

2. CALL FOR TEXAS TO SECEDE FROM THE U.S.

Yeah, they’re on this bullshit again. Secession is ridiculous, never going to happen, and legally impossible.

But their platform calls for the Texas Legislature to put secession up for vote in 2023. According to the GOP, it’s not the failing grid, the winter storms, or the bass-ackwards policy making that has impaired Texas, but the U.S. government.

It’s like they haven’t been on the same plane of reality as the rest of us. Our Republican-led state legislature has done nothing but tear Texas to shreds in the last two years and the federal government has done little to help. The only thing “impairing” Texas is our Republican leadership.

Rejecting the LGBTQ+ community is nothing new for the Republican Party, but Texas’ recent streak of translating harmful rhetoric into law brings cause for worry. After labeling homosexuality an “abnormal lifestyle choice,” they also call for the nullification of Obergefell v. Hodges (the landmark case making marriage equality the law of the land) with the goal of outlawing LGBTQ+ marriage “regardless of state of origin.”

Oh but the bigotry doesn’t stop there! In fact, gender and sexuality are one of the topics most prevalent in the 2022 Texas Republican platform.

They use outdated language and scientifically disproven ideas to alienate and monstrify transgender Texans. They want any teacher who brings up LGBTQ+ topics to be prosecuted and have their teaching certification revoked. They want schools and the military to require adherence to the gender binary and oppose all forms of validation for transgender folks, whether physical or verbal.

All of this in the middle of Pride Month.

4. MAKE IT EASIER TO GET A GUN

Despite losing 19 children and two teachers in the mass shooting in Uvalde, Texas just weeks ago, the Texas GOP wants to expand gun access. Eight mass shootings in 13 years has only led them to call for more guns blazing in every nook and cranny that Texas has to offer. Think that’s being dramatic?

Here’s proof: They want NO gun free zones, unrestricted Constitutional Carry, and entirely reject the bipartisan gun reform agreement that’s going through Congress as we speak. They booed Senator John Cornyn when he took the floor for even proposing it.

We’ve previously shot down Republican talking points on guns, yet it seems no matter how many Texans lose their lives, young or old, the GOP’s guns will remain more important than life itself. Considering the Jan. 6th attack and the harmful rhetoric they’ve been spreading, making access to guns easier for QAnon, far-right Trump cronies is the last thing this country needs.

The Texas GOP got way out of hand with this year’s stance on voting rights. That is, they don’t want Texans to have any. They want in-person voting condensed to three days, with no gap between the first day of Early Voting and Election Day. That’s a huge drop from our current two-week early voting periods.

Imagine the mess it would create if Texas was limited to holiday shopping over three days in December, with no online options available - many people would just skip it. And that’s what three days of in-person voting would look like.

Even worse, they urge the “Voting Rights Act of 1965, codified and updated in 1973, be repealed and not reauthorized.” Its disappearance would make their attempts as voter disenfranchisement all the easier. After Section 5 of the act was overturned in 2013, restrictive voting laws flooded the U.S. A total repeal would be disastrous, dumpster-fire for our democracy.

Nearly every plank mentioning the environment is pro-pollution. The Texas Republican Party isn’t just ignoring science, they’re pushing against it. They:

7. BAN ALL ABORTION FROM THE MOMENT OF FERTILIZATION

If Texas’ 6-week abortion ban, without exception for rape or incest, wasn’t enough, the Texas GOP wants abortion outlawed and criminalized from the moment of conception. Unfortunately, the ball is already rolling in their direction.

With the Supreme Court set to overturn Roe v. Wade, Texas’ trigger law outlawing abortion from conception, will go into effect. And Texas Republicans won’t stop there. Their next step is to criminalize abortion, go after Plan B, and restrict birth control.

In 2018, the idea of a total abortion ban seemed far fetched. 46 years of precedence protected our autonomy. Now, what’s left of our reproductive rights are slowly trickling away.

The Texas Republicans are trying to rewrite history with a party platform that calls for the restoration of any confederate monuments that have been removed anywhere in Texas.

The voters are overwhelmingly in favor of it (83% for medicinal use), so of course the Republican Party of Texas is overwhelmingly against it. They make clear they want marijuana to remain illegal in Texas.

On top of banning content dealing with LGBTQIA+ issues and racism in schools, they also want to ban sex education.

Oh, and why not regress even further by repealing all hate crime laws? The Texas GOP argues in their platform that hate crime laws should be repealed because there are already plenty of other laws covering crimes against “other persons” on the books. Considering hate crime rates are higher than they have been in over a decade, we think otherwise.

The GOP is hacking away at our autonomy by controlling our uteruses, our identities, and our access to healthcare, as if the ability to control our own bodies isn’t intrinsic to the idea of Life, Liberty, and the Pursuit of Happiness that they ceaselessly invoke.

If not for the rise of Trump , some of the discriminatory language used by the Republican Party may have receded. His success has inspired the party to shift farther right. In the words of Progress Texas President Ed Espinoza:

“Normally what happens is, when there’s crazy in a party, people try to soften it. In this case, they saw it worked for Trump so they think it’ll work for them.”