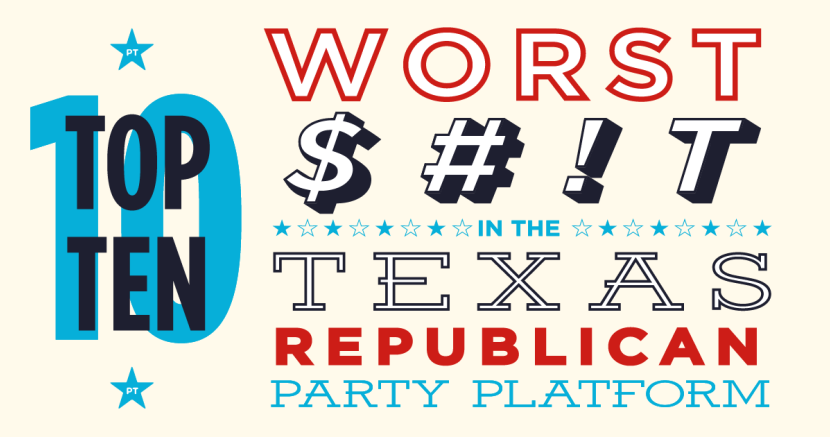 In case you had any doubts, the Texas GOP party platform is still garbage.

Texas Republicans approved multiple legislative priorities and backed a platform that includes more than 300 planks during their convention in June. As per usual, the platform is full of racist, xenophobic, sexist, transphobic and homophobic priorities.

To save you the trouble (and horror) of going through 300+ planks of pure evil, we’ve narrowed it down to the worst garbage we found in their agenda.

All of these planks were approved by Texas GOP party leaders from across the state.

Important Note: This list is not exhaustive. Trust us, there are many more terrible items in their platform.

1. Discriminate against the LGBTQ+ community

More than 20 of the planks target LGBTQ Texans. Here are some of the lowlights. The Texas GOP:

Oh, and if you haven’t been keeping up with the news, indicted Attorney General Ken Paxton is attacking the transgender community again, this time, framing his crusade against LGBTQ Texans as a parental rights issue. So it’s safe to say that the LGBTQ community will face a number of attacks in the upcoming session.

The Texas GOP is obviously obsessed with abortion, bringing it up no less than 31 times in its platform.

Though it is still the law of the land, Texas Republicans have thought of almost every way to word a plank that would ban, criminalize, and abolish safe and legal abortion in Texas entirely. Planks on planks that explicitly call for the overturning of Roe v. Wade, the criminalization of abortion providers, and the abolishment of abortion by demanding the state violate federal and constitutional law.

In case they’re not able to do it outright, the GOP has also provided a long list of restrictions they hope to continue to pass to make abortion legal in name only and effectively inaccessible in reality. Proving that no issue is safe from religious coercion, they gave a nod to employer-based religious refusals for abortion and birth control. And, of course, they want to fully defund Planned Parenthood and any any affiliates of abortion providers. But are totally okay with funding fake anti-abortion experts and fake clinics.

3. Be racist toward immigrants

Texas Republicans still support Donald Trump’s ridiculous plan to build a wall along the border. The party also wants Congress to pass a constitutional amendment that defines citizenship as “those born to a citizen of the United States or through naturalization,” conveniently leaving out children born to parents from other countries (documented and undocumented). They say in the platform that amnesty should not be granted to immigrants and that the refugee resettlement program should be abolished. If that weren’t enough, in plank 50, Republicans put their racism toward immigrants on full display:

“Those who seek to immigrate here and transplant their failed systems, either of laws or traditions, should be permanently returned to from whence they came. Our official language is English, and while we may individually speak many languages, there shall be no law mandating a plurality of languages either in private or in public governance.”

Disgusting. And FYI, the United States has no official language.

Republicans oppose expanding Medicaid in Texas, which could provide health insurance to over a million uninsured Texans and save Texas money. They also demand the repeal of the Patient Protection and Affordable Care Act. In other words, the party wants to restrict access to affordable healthcare, putting Texans’ lives at risk.

In a recent poll, Texans said the top priority of the Texas Legislature should be lowering the cost of health care. Texas Republicans, who hold a majority of both chambers, want to do the exact opposite.

5. Put lives at risk by defending the NRA

Texas Republicans refuse to consider common sense gun laws, even if it means sacrificing the lives of innocent children. The party opposes increased background checks, gun-free zones, and monitoring programs like Red Flag. They even oppose the few federal gun laws we have in place, like the Federal Gun-Free School Zones Act of 1990 and the National Firearms Act.

Not only are they against implementing common sense policies, but the Texas GOP wants to make accessing, owning, and carrying guns even easier than it already is in Texas, saying they “support all legislation and policies that reduce restrictions on legal gun owners to purchase, own, or carry any type of gun, ammunition, accessory, knife, or other weapon.”

6. Protect racism and monuments to racism

The GOP wants to repeal all hate crimes laws and opposes the removal of any Confederate monuments from Texas soil. In plank 138, the party expresses that it favors “strengthening our common American identity, which includes the contribution and assimilation of diverse racial and ethnic groups.”

We can’t make this stuff up, folks.

7. Indoctrinate instead of educate

Instead of offering solutions for problems facing our public schools, the Texas GOP wants to divert public school funding into private school vouchers.

They also support teaching “all sides” in classroom discussions of evolution and climate change, sticking to their personal brand of denying facts and giving religion an undue place in education. Separation of church and state? Who is she?

And to top off their miseducation agenda, Republicans continue to promote their outdated stance on sex education, which would effectively increase teen pregnancies and risk of STDs by prohibiting “reproductive health care services, including counseling, referrals, and distribution of condoms and contraception through public schools” and "sex education, sexual health, or sexual choice, or identity in any public school in any grade whatsoever." We all know what happens when young people are not educated on sex. Just look at the data.

Work to protect the right of every Texan to vote? Nah. Texas Republicans want to repeal the Help America Vote Act and Voting Rights Act. The GOP has already passed restrictive voter ID laws aimed at voter suppression, and now the party wants to make it even harder to register to vote. Texas ranked 47th out of 51 for turnout during the 2016 election. Apparently, Republicans want to bring that down to 51st. Because why rank 4th to last when you can be last?

In plank 16, the Texas GOP says, “‘Climate change’ is a political agenda promoted to control every aspect of our lives.” The party supports the defunding of “climate justice” initiatives and the abolition of the Environmental Protection Agency and repeal of the Endangered Species Act. While the party comes up with more conspiracy theories about climate change, 97 percent or more of actively publishing climate scientists agree that the climate warming trends over the past century are extremely likely due to human activities and most of the leading scientific organizations worldwide have issued public statements endorsing this position.

10. Champion dumb and other eff’ed up stuff

If you were looking for smart policies that would give a fair shot to working Texans and families, this platform isn’t for you. If you’re looking for wacky ideas with no vision or substantive solutions behind them, look no further. Texas Republicans want to abolish state agencies, like Texas Child Protective Services, as well as 11 federal agencies including the IRS and the Department of Education. Obviously, they provide for no real alternatives.

They also support the repeal of the 17th Amendment, meaning state legislators would have the power to appoint our US Senators, instead of — ya know — Texans voting for who they want to represent them. We’re convinced they thought nobody would actually read their platform. There’s no way they actually think these are good ideas, right?

Oh, and among the other extremely messed up stuff in there, the party also opposes women in military combat positions. Because why act like it’s 2018 when you can pretend we’re still living in the 1950s?

BUT, the Texas GOP did include a surprise in their dog manure pile of a platform!

The party wants to move cannabis from the list of Schedule 1 drugs to Schedule 2, and decriminalize the possession of small amounts of marijuana.

So, as the Texas Republican Party sets out to accomplish their hateful agenda, we will perhaps find solace in small amounts of marijuana to deal with all the terrible sh*t listed above.