Ted Cruz won’t resign, here are 4 things we can do 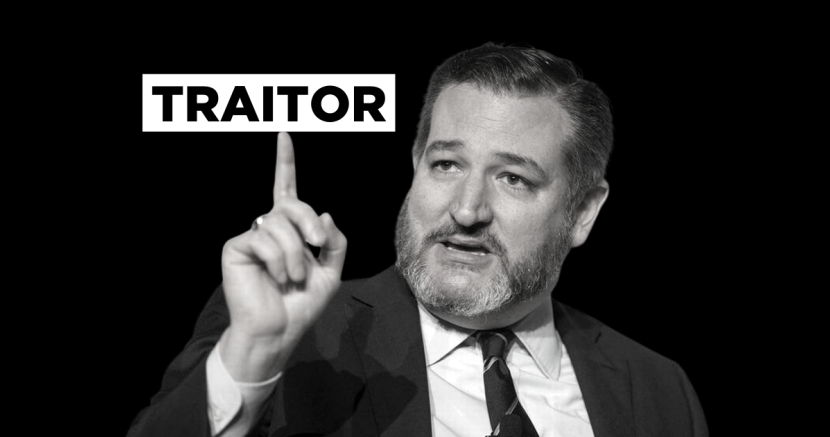 Over his eight years in office, Sen. Ted Cruz has proven to be the worst of the worst, twice winning our award for “Worst Texan” (both in 2018 and 2015).

His actions over the past few weeks have reached an all-time low.

In leading the charge to challenge the Senate’s certification of presidential election results, Cruz furthered conspiracy theories pushed by Donald Trump. And though these conspiracy theories lacked facts, evidence, and were rejected roughly 60 times by various courts, Cruz carried on anyway.

The actions Ted Cruz took in the Senate on January 6th contributed to inciting an insurrection on the U.S. Capitol. The Senate, after having gone into lockdown, miraculously recovered and reconvened later that day. And even after seeing the death, violence, and destruction that came from the insurrection, Cruz chose to continue his sideshow.

Ted Cruz is not suited for public office and needs to go. While he’s ignored calls for him to resign, here are four other things we can do.

Under Article I, section 5 of the Constitution, the Senate is permitted to determine rules for disorderly behavior and the case for expulsion. Needing a vote of two-thirds of the body, the case for expulsion has been made 33 times in the history of the U.S. Senate. Of those 33 attempted explusions, 15 were expelled and six resigned. Of the 15 who were expelled, the charges related to treason for one, and sedition for the other 14 - specifically for supporting the Confederacy.

In this case, Cruz’s actions qualify him for charges of treason or sedition (or both). Either way, history is not on his side.

Sure, normally we’d agree that Republicans don’t want to expel another Republican. But they also can’t stand Ted Cruz. And seeing that he’s from Texas, the Republican governor will appoint another Republican in Cruz’s place (until a special election can be called). So in reality, that might be more of an incentive for his colleagues to give him the boot!

While the Senate has no official term for a reprimand, though the term “censure” has come up from time to time, it certainly may impose reprimands on its members and has done so eight times. An official reprimand might include things such as a fine, loss of seniority, stripping a Senator of committee assignments, or other penalties. In 1990, Republican Senator David Durenberger was censured for unethical conduct and accepting outside gifts and, subsequently, had his law license indefinitely suspended by the Minnesota Supreme Court.

While there’s no set of rules for penalties associated with a reprimand, Cruz has given the Senate plenty of options to work with here.

Look, if we can’t get rid of the guy can we at least have some fun while reminding people of his toxic politics? Renaming a toxic waste dump after him would be a fitting tribute to someone who has inflicted toxic politics on our state for nearly a decade.

If it’s a toxic waste dump, a regular dump, or a sewage treatment plant, these are all prime locations to bear “Toxic Ted’s” name.

All other efforts aside, the best way to ensure that Cruz will not return to the Senate is to start organizing for 2024 now. Let’s get to work now, change cannot wait!

That means getting involved with organizations like Progress Texas or this long list of progressive advocacy groups that are working to build a stronger Texas.

Elections are not the beginning or end of politics, they are a part of a process that includes legislative advocacy, activism, and more. Democracy is like a muscle - you have to exercise it to keep it healthy. And to build a strong and more inclusive Texas, our work continues.