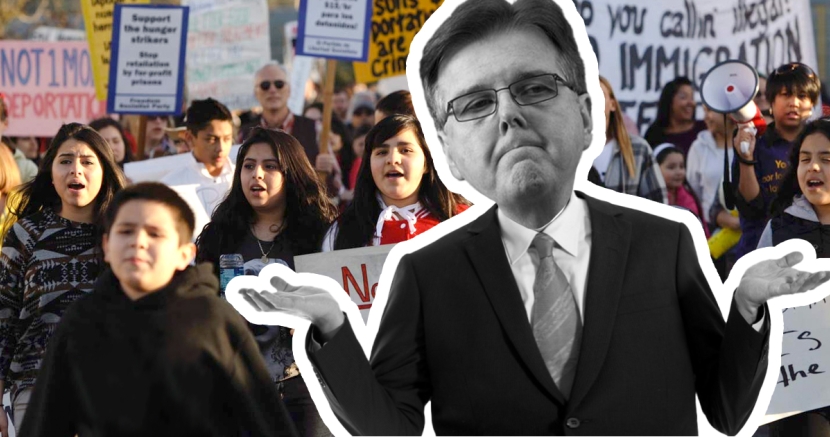 How your vote reined in Dan Patrick’s priorities

The Texas Legislature has gone from the transphobic bathroom bill and anti-immigrant sanctuary cities ban in 2017, to school finance and property taxes in 2019. How’s that for progressives taking back Texas?

Patrick’s list of 30 priorities for the 86th Legislature focuses on property taxes and school finance. While there are still some pretty horrible bills in the list, such as the anti-paid sick days bill (SB 15), and several bills that seek to restrict abortion rights and providers, there’s an obvious shift in priorities compared to the last time our lawmakers met under the dome.

Who’s to credit for this shift? You are.

Texas voters made a statement with their votes in the 2018 midterm election. Although Republicans still hold majorities in both chambers, Democrats gained seats in both the House and Senate, securing their biggest bloc in the House in a decade.

Your votes are to credit for the changes we’ve seen in the legislature this year. The truth is, Texas Republicans are scared. And they should be. If progressives gained that much ground in a midterm year, imagine what we will accomplish in a presidential year! Progressives are the new majority in Texas and Republicans know it.

Stay on the lookout for bad bills.

It’s important, however, not to be fooled by the lack of outright racism, sexism, homophobia, transphobia, and xenophobia typical of Texas Republicans in previous sessions. It’s still there! It’s just being (somewhat) hidden, for now.

Just look at the Texas Republicans’ party platform that was approved in 2018. Many of these issues have not taken center stage because Republicans know now they will be held accountable come Election Day. They don’t want the bad press. But there have been many bills filed that show the ugly side of their agenda.

It makes sense when you think about it. The Republican strategy is not to advertise the bills they know a majority of Texans don’t agree with. They’re distracting the public and the press by staying focused on the good ‘ole “bread-and-butter” policy issues like property taxes and school finance, meanwhile, a number of bills have been filed that attack voting rights, women, working families and more.

The bar has been set low. We have to keep raising it higher.

It’s sad when we as Texans are impressed by the fact that our leaders aren’t attacking trans people or exhibiting blatant racism. This just goes to show how low the bar has been set by our public officials in previous years.

We should not be thanking them for doing the jobs they were tasked with doing all along. But what we can do is take a breath, celebrate the fact that we have more elected officials in the legislature fighting for our values, and then get back to work.

The fight is far from over, especially with the legislative session just beginning to pick up. We’ll be at the Capitol advocating on behalf of all Texans and we need you there.

Here’s a breakdown of some of Patrick’s priority bills by number:

Every session the legislature must pass a state budget and the budget bills are traditionally the first bills filed in the Senate (and the House has their own set of budget bills HB 1 & HB 2). The Lt. Gov. must ensure these bills are passed within 140 days of session.

Teacher Pay Raises and Education Funding: Advocates and teachers have been advocating for a solution to our crumbling public school infrastructure for years. Texas teachers are long overdue for a pay raise and this session, lawmakers are looking at pay raises and pension plans.

Thanks to progressive voters in the midterms, our state legislature is finally taking action on public education.

Harvey Funding: After the historic floods and damaged caused in the Houston area by Hurricane Harvey, state lawmakers vowed to provide funding and infrastructure relief for the largest growing city in Texas.

Prohibiting LGBTQIA+ Protections: As we mentioned above, our state lawmakers are on edge after we made noise on the anti-trans bathroom bill last session. However, they are back with subtle attacks on LGBTQIA+ people on a false premise of “religious freedom.”

Abortion and Reproductive Restrictions: It wouldn’t be a Texas legislative session without a slew of bills attacking abortion and reproductive rights. The following bills seek to make abortion out-of-reach for people in our state.

With their ultimate goal being to ban abortion outright in Texas, Republicans haven’t been shy about filing bills that would do just that.

Mental Health and School Safety: Texas lawmakers are working to provide school safety and mental health services in response to the 2018 Sante Fe shooting. The problem? You can’t fully address school safety without also addressing Texas’ gun policies. The following bills conveniently leave guns out of the picture. Mental health is important and SHOULD be a priority. But, Texas legislators are using it as a scapegoat and refusing to address our weak gun laws.

Anti-Paid Sick Days: Austin and San Antonio passed paid sick ordinances that would allow hundreds of thousands of working people the ability to earn paid sick time to take care of themselves or a loved one. Now, Texas Republicans want to take paid sick days away from working people rather than implementing a statewide policy that would benefit the needs of every Texan.

These priority bills only represent a small portion of the bills filed. For a more in depth look, check out our blog on the bills we're watching this legislative session.

Sam Robles contributed to this blog.

Redistricting Update: What do the new gerrymandered Texas maps look like?
1 day ago

PODCAST: Redistricting and the 3rd Special Session
3 days ago