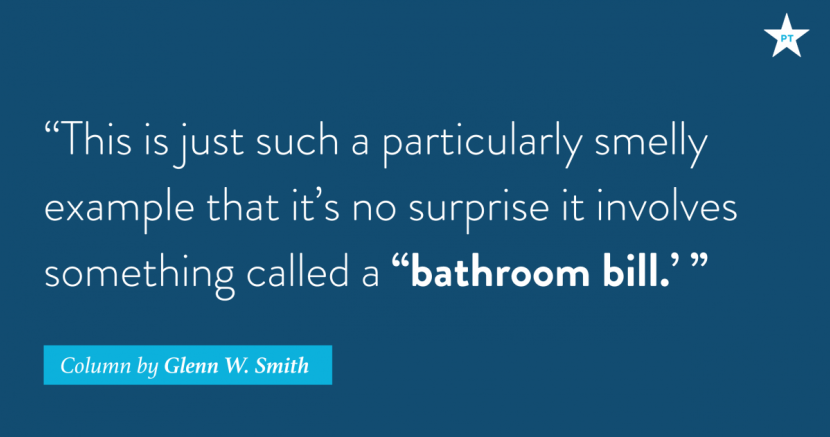 The lone Senate Democrat to support the “bathroom bill” was accused by many in his own party of being a “complete sellout.”

The day after Sen. Eddie Lucio became the lone Democrat to vote for SB 6, the controversial “bathroom bill,” its sponsor, Sen. Lois Kolkhorst, helped quietly slip a $5 million project into the state budget for Lucio’s district.

Lt. Gov. Dan Patrick had been having trouble securing enough votes to bring his pet bill to the floor of the Senate. Then Lucio announced he’d support the bill. His vote was key to helping Patrick and Kolkhorst avoid the embarrassment of having their top initiative blocked in the chamber Patrick runs.

It’s also a $5 million taxpayer-funded talking point for Patrick and Kolkhorst, who, because of Lucio’s “yes” vote, can now claim bipartisan Senate support for an ugly, bigoted bathroom bill that seeks to discriminate against transgendered folks.

Let’s put this in even larger context. The $5 million in taxpayer money is to be used for a new “Urban Ecology Center” at a nature and birding park in Lucio’s district. It is precisely the kind of thing Republicans say taxpayer money should not fund.

For instance, the right-wing campaign and advocacy group, Empower Texans, once attacked an Austin City Council proposal to spend $355,000 for landscaping and a “rain garden” in the median of an Austin airport roadway. Empower Texans, of course, is a big supporter of Kolkhorst’s.

“Very collaborative effort.” That’s one way of describing the kind of vote buying that goes on behind the scenes of this and every legislative body. This is just such a particularly smelly example that it’s no surprise it involves something called a “bathroom bill.”

We also have to wonder how Gov. Greg Abbott feels about this. The word is he personally railed on Senate budget writers for ignoring his own key 2017 initiative: the funding of pre-kindergarten for Texas children. Lucio gets his $5 million while Abbott gets stiffed.

There may be even more at stake in these shenanigans. Sources in the Senate tell us that Lucio has also pledged to vote for the Senate’s version of the state budget. That raises a question: was it ultimately Lt. Gov. Patrick who ordered the $5 million gift to Lucio? That might help explain why Democratic Sen. Juan Hinojosa, a Senate Finance Committee member, helped Kolkhorst with the Lucio budget rider. Finance Committee members seldom say “No” to a lieutenant governor.

Lieutenant governors have a lot of power over senators. They can make their lives miserable. They can reward them and their constituents. They can order $5 million for an urban ecology project at a birding center, for instance.

It’s quite the pork project, this birding center. Normally, Republicans would support such a project only when pigs fly. Well, pigs flew.