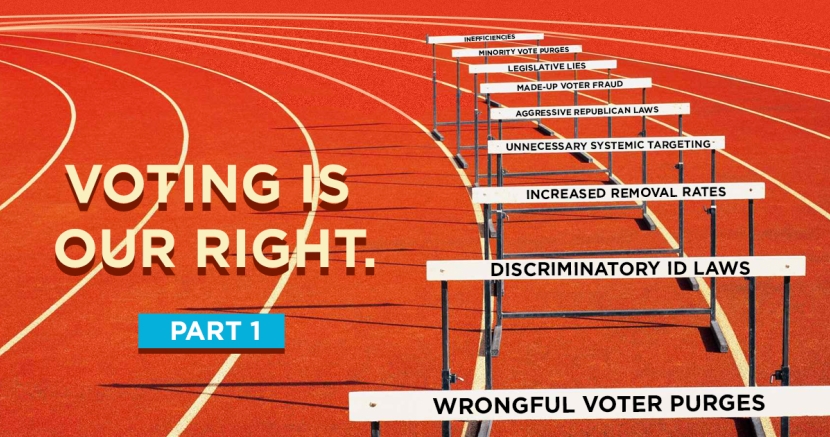 A study released in July by the Brennan Center for Justice found that nine states, including Texas, quietly removed thousands of citizens from voter rolls.

This increase in removals, in addition to Texas’ already restrictive voting laws, should have every Texan concerned. While our lawmakers hide behind their tired voter fraud lies, they are taking actions in an attempt to deny many Texans their right to vote.

Texans should be protected from wrongful purges.

Texas officials have made repeated mistakes over the years when attempting to purge voter rolls.

In 2012, weeks before the presidential election, officials in Texas incorrectly matched active Texas voters to dead strangers, threatening the voter registration of thousands of Texans. And SURPRISE, voters in districts with heavier concentrations of Hispanics or African Americans were disproportionately affected.

Overly aggressive purging is not only discriminatory, but unnecessary. Instead, our officials should be working to be sure everyone who is allowed to vote, can vote. Texas need only look to other states to find a system that works.

Texas has been entangled in a seven year legal battle over its discriminatory voter ID law.

This increased purge rate did not occur in isolation but was compounded by restrictive voting legislation.

Texas has been facing court battles since 2011 challenging the implementation of discriminatory voter ID laws.

In 2014, a federal district court ruled that the Texas’ voter ID law was motivated by a discriminatory purpose: reducing minority political participation. The 5th Circuit Court of Appeals also concluded the law had a discriminatory effect.

In 2017, Texas Republicans passed a new voter ID law. A federal judge struck down the new law, saying not enough changes were made from the old law. Litigation proceeded and in the most recent ruling, a federal appeals court upheld Texas’ voter identification law.

Rampant voter fraud does not exist in Texas or across the nation.

The real issue is people not able to vote who should be able to vote. Texas Republicans have been advancing the voter fraud myth for years, and in 2016, Trump took the strategy right out of the Texas GOP playbook.