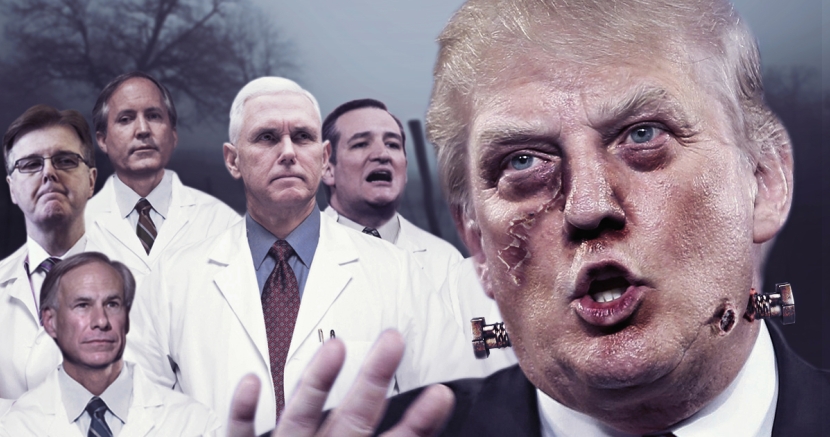 According to Donald Trump almost everything is rigged — from his reality tv show to the presidential debates to the election itself. His latest scorched earth tactic of peddling the baseless notion that this election is rigged could maybe be the most damaging part of his campaign. And while some — not all... — Texas Republicans are trying to distance themselves from Trump’s rhetoric, he’s using the voter fraud lie they created to push through voter ID laws to deny Texans their right to vote.

Voter fraud is a myth.

Study after study has shown that “fraud by voters at the polls is vanishingly rare.” The Brennan Center for Justice found voter fraud rates between 0.00004 percent and 0.0009 percent. Even these remarkably few incidents can be traced to other sources, such a clerical or human error.

However, as he's done in the past, Governor Greg Abbott continues to ignore the facts and to fuel the fire of voter fraud. Earlier this week, Abbott called voter fraud “rampant” in the state of Texas, and implied the possibility of a rigged election.

The only difference between Trump's and Texas GOP's lies is that Trump has a louder megaphone. Both use this “big lie” tactic — “repeat a lie loudly, over and over until people come to believe it,” a propaganda technique historically used by dictators and fascists — for their personal political gain. Nevermind the havoc their words could wreak on our democracy.

If anything, Texas Republicans tried to rig elections with their voter ID law.

In 2011 Rick Perry declared voter ID legislation an “emergency item” and signed into law the most restrictive voter ID bill in the nation. From there, the law bounced from court to court until this year, when it was struck down by the U.S. 5th Circuit Court of Appeals — one of the most conservative in the county — for the law’s discriminatory impact on “racial minorities, low-income voters, students and other [minority] groups.”

The court’s ruling is thoroughly backed by science as well. In a joint study conducted by University of California San Diego and Bucknell University, researchers found that “Democratic turnout drops by an estimated 8.8 percentage points in general elections when strict photo identification laws are in place.” In comparison, Republican turnout only drops by an estimated 3.6 percent.

Trump’s scary call for “election observers” is on Texas Republicans.
Despite the evidence against stricter voting laws, Trump, who has openly been an advocate of racial profiling in other contexts, has called on his supporters to become “Election Observers,” a position that entails going to the polls, watching pollers, and ensuring that no visible voter fraud is taking place.

The use of “election observers” this year is scarily similar to elections during the segregation era, in which white supremacist groups descended on polling places to intimidate Black and Chicano people from casting their votes.

His statements are simply giving power to discriminatory “election observers,” and are directly harming the process of democracy.

Trump’s dangerous rhetoric is a monster Texas Republicans created — and for which they should be held accountable.