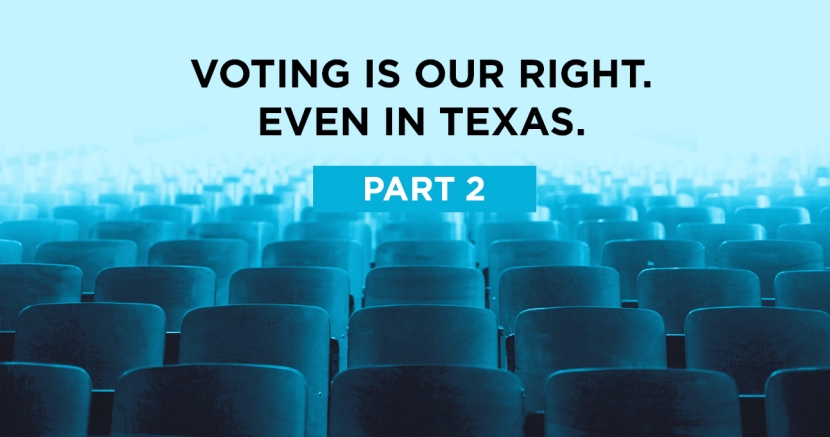 Wesley Story
Support for voting should not be a Democratic or Republican issue. It should just be straight up American.

In addition to cutting off Texans’ access to voting through rollbacks, the Texas GOP has failed to support objectively good efforts to increase voter turnout and civic involvement in the state, all due to their backwards goal of maintaining power.

Texas high schools are not complying with election law and Republicans don’t seem to care.

According to a new report from the Texas Civil Rights Project, a majority of Texas high schools failed to comply with election law in the last two years.

Since 1985, the Texas Election Code has required all public and private high schools in the state to distribute voter registration applications to eligible students at least twice per school year. However, according the report from TCRP, more than 183,000 high school seniors may be missing the chance to register to vote because the election law isn’t being followed by school districts or enforced by the Texas Secretary of State. The report states that only 34 percent of Texas high schools requested voter registration forms from the Texas Secretary of State’s office, the first step in complying with the law.

In the report, TCRP offers simple suggestions to the Secretary of State’s office to improve compliance. The report says the office should send voter registration forms to schools, rather than requiring administrators to request them, offer online trainings for voter registrars, and create a database showing which schools are registering students.

Efforts have also been made by some members of the Legislature to better enforce the law, but Texas Republicans have shut down these attempts.

In 2017, a democratic state representative filed a bill that would have required high schools to make voter registration forms available year-round to students. The bill passed unanimously in the Texas House Committee on Public Education, but failed to reach the full chamber for a vote.

It’s 2018 and you still can’t register to vote online in Texas.

A lack of guidance for high schoolers would not be quite as big of a deal if Texas’ voter registration process wasn’t so unnecessarily complicated.

The Secretary of State requires a physical signature on voter registration forms. Eligible voters in Texas cannot register online. In order to register, you must either find a volunteer deputy registrar to register you in person, or have your registration form sent to you by mail, fill it out and mail it back.

Again, when compared to the other states in the country, Texas is behind the curve. According to the Brennan Center for Justice, 38 states currently or will soon offer online voter registration. Texas, however, is not one of them.

Online registration would help to modernize the voter registration process. Voters would be able to check and update their registration records through an online portal, reducing the need for voter purges. Currently in Texas, if you move out of your county, you have to reregister completely. With a more accessible registration system, voters could make timely changes to their records to reflect more accurate information.

Party over people means democracy for some.

To many, the choices are clear. Register young people to vote. Make the voter registration process more efficient and accessible. Increase voter turnout.

These are all indisputably good things that would improve our democracy. So why have they been politicized? It should not be Democratic or Republican to want to support voting. That should be straight up American.

In a state like Texas, with a population of more than 28 million, any effort to streamline our voter registration process should be embraced. The state’s dismal voter turnout numbers show how important it is that the next generation of voters are registered.

If our lawmakers are unwilling to support objectively good efforts to improve democracy for all because of personal agendas and party loyalties that only seek democracy for some, then they are not living up to the ideals our country was founded on.

In other words, kick these anti-Americans to the curb come November because there is no longer any room for them in Texas. They’ve overextended their stay in our great state.