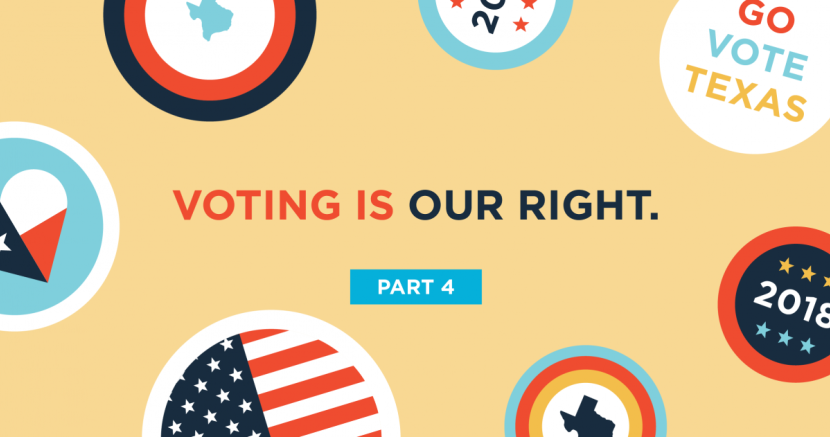 Wesley Story
Texas Republicans want you to think your vote doesn’t matter. But here’s a hot take: it does.

Out of all of the deterrents the Texas Republicans have concocted to keep Texans from voting, our greatest challenge is overcoming the indifference and cynicism that causes us to stay home on Election Day.

Given the obstacles facing voters in Texas, it’s no wonder the state has low voter turnout numbers compared to the rest of the nation. And it’s hard not to be cynical when looking at those numbers.

But instead of letting the results of recent elections discourage us from voting, they should serve as a wake up call. If voters in Texas continue doing what we’ve always done, then the results will be what they’ve always been. If Texas voters turnout on Election Day, there’s a greater chance we’ll end up with a government that represents all of us.

Voting is the foundation of our democracy. In order to accurately elect a politician to represent the people, the people must vote.

By creating more barriers to voting, Texas Republicans are effectively limiting representation so they can maintain a hold over Texas. Because many realize the system has been hijacked by those in power to work in their favor, some have decided voting is pointless. But, that’s just what the GOP want.

Victory for Texas Republicans is not only putting laws in place to make registering to vote slightly more difficult. They measure their success by how many voices they silence into submission. Conservatives want you to believe Texas is a red state and will never change. They want you to believe your vote doesn't matter and that elections don’t matter.

But those messages simply aren’t true.

Your vote matters. Just ask any candidate who has won an election because of a handful of votes or any person in history who sacrificed for their right to vote.

Texas is not a red state. It is a non-voting state. And if we ever want to see a shift in leadership, it is up to us to fight back against voter suppression and voter indifference by not only showing up at the polls in November, but making sure our friends and families are doing the same.

Still not convinced? Maybe some words from our former president can change your mind.

Now is the time to take action to ensure you can vote come November. We know the registration and voting process has been made unnecessarily difficult by our lawmakers, but there are resources out there to help combat these roadblocks.

Please verify your voter registration status immediately and register to vote before the October 9 deadline.

Visit GoVoteTexas.org for simple instructions on how to verify your registration via the Secretary of State. To verify, you will need one of the following:

Share GoVoteTexas.org and ask your friends and family to check their voter registration status as well.

GoVoteTexas.org also provides steps for registering to vote. For more details, contact your local election office for information on when and where to register. Look out for more resources from Progress Texas in the coming weeks.

Voting is your right.

This story is part of a four-part series on GOP voter suppression. Read the others: