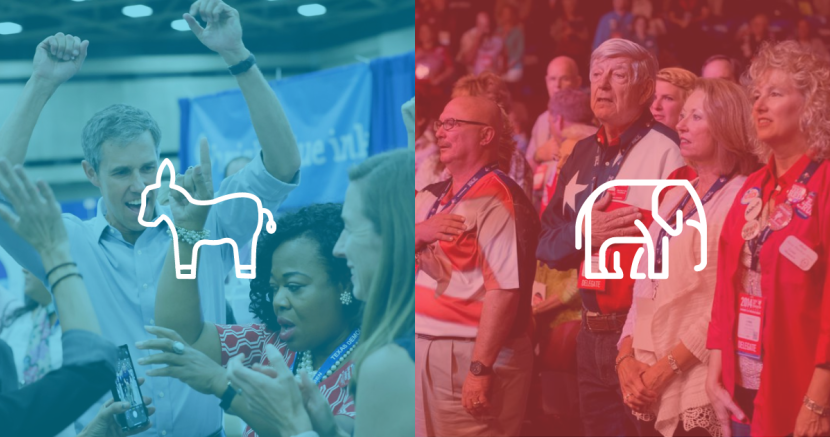 Emily Clark
Freedoms and reality vs. extremism and conspiracy theories: you choose.

The Texas Democratic Party (TDP) recently released its 2022 platform, laying out a detailed plan for a better Texas. The platform is packed full of progressive planks that should help restore some hope in our state’s future.

Right off the bat, it’s clear that the TDP’s platform focuses on one thing: Texans. Sure, that might seem like a given for a state party’s platform. But a glance at the Texas GOP’s 2022 platform would make you think otherwise.

Earlier this summer, the Republican Party of Texas (RPT) released one of the worst platforms we’ve seen in recent years. We expected some messed-up positions, but they went to embarrassing extremes.

Let’s compare some key points in both party platforms:

The TDP doesn’t just want to restore our reproductive rights; they want to expand them. In addition to reinstating the right to abortion, the platform states that our leaders should “trust Texans to make personal and responsible decisions about whether and when to bear children.”

In contrast, we already know the Texas GOP’s stance on abortion. They made that clear when they revoked nearly every reproductive right we had left in the state of Texas.

To make matters worse, the RPT wants to remove sex education from the public school curriculum entirely. It’s already optional under current Texas law and even what is taught is abstinence-based.

Abstinence-only programs have been proven ineffective and harmful by the medical community. Any attempt to amplify current standards or remove sex education would only hurt Texas youth.

The TDP recognizes that the state’s current education system is in shambles. Teachers are underpaid and lacking resources, and more students get left behind each day this issue goes ignored.

To improve education, the TDP wants to ensure teachers are paid adequately, given ample resources, and incentivized to teach long-term. They also want to center student success by improving and equalizing funding to public schools, guaranteeing support, and expanding access to higher education and technical training.

Meanwhile, the RPT’s education planks include a concerning amount of religion. They’re more worried about expanding private institutions than ensuring all Texas students are afforded the same opportunity to excel in school.

Now that we’re on the subject of religion, we can’t help but bring up one particular RPT plank that completely ignores the separation of church and state: They want “prayer, the Bible, and the Ten Commandments returned to our schools, courthouses, and other government buildings.” We’re all for freedom of religion, but this is indoctrination.

The power grid is still unstable and our electric bills have skyrocketed because of the “Abbott tax.”

This is a major issue Texans want elected officials to address, which is why it’s strange that the grid issue only takes up a quarter of a page in the RPT platform. Apparently “hardening” the system is good enough for them. If by hardening, they mean stuffing their pockets with our hard-earned cash, then they’re already succeeding.

The climate crisis is here and we need to start acting like it. The TDP wants to reduce carbon emissions, expand access to clean water and air, and set Texas on the path to leading the global clean-energy revolution.

Their future-centered approach makes the GOP’s environmental platform look like a sad joke. It’s 2022, and the RPT is still arguing that carbon emissions aren’t a pollutant. Guess we know who to blame when there’s no Texas left to enjoy.

Imagine if voting was accessible and easy, and we only had to do it a few times a year. That’s the electoral system Texas Democrats are fighting for.

From making Election Day a statewide holiday to ensuring fair and transparent elections, the TDP wants to ensure our representative democracy is actually representative.

Texas Republicans, however, would rather repeal the Voting Rights Act of 1965 and reduce the state’s voting period to three days. And their attacks on our democracy don’t end there. In their platform, the Texas GOP formally rejects the 2020 election results and calls for Texas to secede from the U.S. Seriously, we can’t make this stuff up.

In summary, Texas Democrats are fighting for our rights, uplifting Texans, and working toward a brighter future for all, while the Texas Republicans are focused on conspiracy theories and appealing to far-right extremists.

“When Texans compare the Texas Democrats’ platform to the jaw-dropping secessionist trash the Texas Republicans adopted earlier this summer, the differences between the two parties truly speak for themselves.” – TDP Chairman Gilberto Hinojosa

These planks are only the tip of the iceberg. Running over 50 pages long, the TDP left no stone unturned in working to secure the rights of everyday Texans.

A change in power is long overdue in Texas.

Need to register to vote or check your status? Visit GoVoteTexas.org for more information