5 Takeaways from the South Carolina #DemDebate 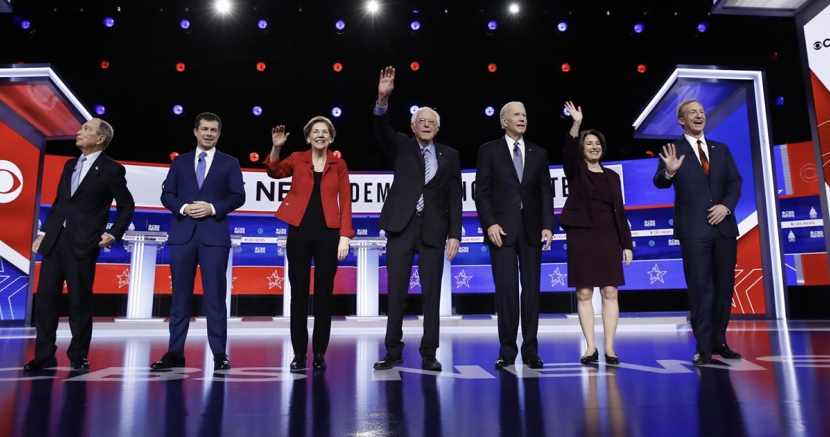 Wesley Story
With just a week to go before Super Tuesday, candidates sparred on the debate stage in South Carolina while Texas voters watched.

The South Carolina Democratic Debate was the last debate before Super Tuesday on March 3. With only seven candidates on stage, the presidential hopefuls gave it their all to make an impression.

Here are five takeaways from the night:

Senator Elizabeth Warren took a move right out of the Progress Texas playbook when she started the debate off by noting that “progressive ideas are popular ideas.” Here in the office, we all cheered!

Warren was right. Progressive issues are mainstream issues - even in Texas! Texas voters want a candidate who embraces progressive values and who will fight for ALL Texans. Don’t believe us? Progress Texas released statewide Democratic poll results Wednesday and the findings show that Texans are looking for candidates who stand for something, as opposed to just being against Donald Trump.

We wrote about how progressive issues are mainstream issues, even in Texas. And it’s generally good politics to embrace the will of the majority https://t.co/sHusjE5nOJ

2. Candidates must listen to black voters.

The Congressional Black Caucus Institute was co-hosting the debate and the topic of race relations and racial inequities came up multiple times throughout the night.

The fact is, all of the candidates on stage, as well as candidates in Texas and across the nation, must do a better job of listening to black voters. Black women consistently vote at a higher rate than any other demographic and in the 2008 and 2012 presidential elections, black voters provided the margin of victory.

Across the country, those running for office should be prioritizing voter outreach to black communities, lifting up black voices, and elevating black candidates.

Black women consistently vote at a higher rate than any other demographic and in the 2008 and 2012 presidential elections, black voters provided the margin of victory. #DemDebate #DemDebate2020 https://t.co/6AEuciXN1Z

3. Health care is a human right.

The debate on health care continued, with candidates sticking to their guns on the best way to approach America’s affordable health care crisis. Candidates were also asked to discuss health care access in rural communities.

Texas is home to the largest number of rural hospital closures in the country and about a quarter of all closures have happened here. Texas also has the highest uninsured rate in the nation. Meanwhile, our GOP lawmakers continue to attack the Affordable Care Act in an effort to take away health care from millions and remove protections for people with pre-existing conditions.

Health care is a human right and our state needs a president who will not rest until all Texans are insured and can access the affordable health care they need!

Texas has the highest uninsured rate in the nation & GOP lawmakers continue to attack the #ACA in an effort to take away health care from millions & remove protections for people with pre-existing conditions.

Gun violence is preventable, but Republicans and special interests are holding us back. Candidates discussed their plans to address gun violence and how to get common sense gun reform legislation passed.

We know that a majority of Texans want and need gun reform. Texans want candidates who support things like passing universal background checks and ‘red flag’ laws, as well as stopping straw purchases and the sale of assault weapons. Gun violence is preventable, and we need a president who fights to keep all Texans safe!

Gun violence is preventable, but Republicans are holding us back. #GunReformNow https://t.co/8hgdHV6yc7

Early voting in the Texas primary runs through Feb. 28 and Election Day is March 3.

Texas voters have the opportunity to use their voice and decide which candidates will make it onto the ballot in November. We must ALL get out and vote!

And with that, the South Carolina #DemDebate comes to an end!

Remember that #EarlyVoting in the Texas primary runs through Feb. 28 & #ElectionDay is March 3rd.

Visit https://t.co/QXC8WLvTdn for information on how and where to vote. See you at the polls! #VoteTexas pic.twitter.com/FtcZ5CHmxN