Texas must do better to protect incarcerated people from COVID-19 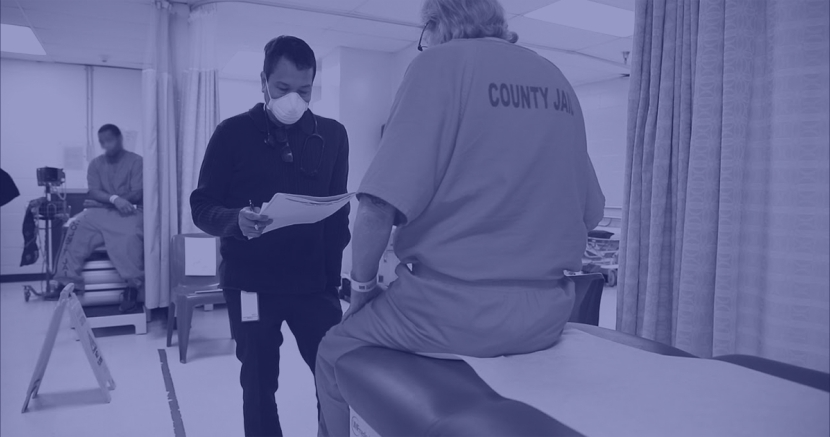 Texas is currently in a state of emergency amidst the COVID-19 pandemic, and the safety and health of those experiencing incarceration must be prioritized.

Over the years, the population inside Texas county jails has rapidly grown, and many continue to be arrested for non-violent crimes and first-time offenses.

The growing population can largely be attributed to the classist framework of the resource-based bail system, which disproportionately affects low-income people and people of color by allowing anyone, no matter how dangerous they are, to be released if they can afford it, while many who are low-risk remain incarcerated until trial.

Our government has a duty to protect those experiencing incarceration, and when thinking of the ways this community has been impacted by the coronavirus pandemic, we had some questions:

One person in a Texas detention center recently turned herself in. She has been on probation for the same charge for over ten years and had a warrant out for her arrest because of the unrealistic expectations set for those on probation. Having to regularly pay high fines, attend court-mandated classes and community service, and timely visits with a parole officer were barriers that were especially difficult to navigate for her, especially because she experiences homelessness and addiction.

When she was booked into a county jail in North Texas in the early stages of the COVID-19 pandemic, she said that rather than being released quickly to minimize jail population and limit the spread of illness, she was put into solitary confinement for 14 days for quarantine purposes — something other jails and prisons have shockingly done in the past in response to viral outbreaks. She’s also only allowed one free phone call a week.

Progress Texas reached out to several county jails across the state to learn how committed they are to taking appropriate measures that protect the health of those in their care.

The Harris County jail released this video that provides an overview of the safety protocols taken by the facility before and after the pandemic.

“We have a huge responsibility first and foremost to the patients that the county sheriff has entrusted to our care — to make sure that they’re well and protect,” the video states.

In addition to continuing the protocols they always do during viral outbreaks, such as germicidal wall and floor cleaning, practicing good hygiene, and using personal protective equipment, they’ve also implemented new measures.

At their new processing center, people are asked a series of questions informed by CDC guidelines before entering the facility in order to screen for symptoms of coronavirus, such as:

For those who answer “affirmatively”, they’re unable to enter the open parts of the facility until they’ve been assessed by the jail’s doctor, who will then decide whether they need to be transferred to the hospital or not. According to the video, these measures were implemented before COVID-19 even reached the U.S. to prevent the illness from entering the jail. But it’s unclear from the video whether they provide temperature checks to everyone entering the building.

If a suspected case of coronavirus arises within the jail after intake, the facility has “quarantine tanks set aside” to provide direct care from physicians, nurses, and psychiatric specialists 24/7 to people who need individualized care.  The facility has also suspended in-person visitation, and coronavirus testing is provided to anyone who shows symptoms of the virus or who may have been exposed to it. For employees, a hotline has been set up by the Public Health Taskforce that offers guidance on symptoms of the virus, how to self-quarantine, treatment, and where to get tested.

As of two weeks ago, TCJ quarantines all incarcerated people entering the facility for 10-14 days “out of an abundance of caution,” said a spokesperson for the facility in an email.

“We sought approval from [the] Texas Commission on Jail Standards before implementing and not only received their approval, but were also commended for the proactive approach,” they said.

Like the Harris County jail, TCJ states they’re familiar with viral outbreaks and “work to keep the facilities clean and sterilize common areas to prevent the spread of illness.” Among the pandemic, keeping a clean and sterile environment is something the facility is also committed to. Temperature screenings are required for anyone entering the building, and those with a temperature greater than 99.6 are prohibited from entering. Those brought to Central Booking undergo a series of questions based on the CDC in order to identify possible signs or risk of illness, and those presenting with such are isolated and provided medical support. COVID-19 testing is also provided to incarcerated people based on the Austin Public Health guidelines.

According to a spokesperson for the facility, the cells of non-violent offenders are equipped with sinks, and people are provided soap and have access to hand sanitizer in “common areas and hallways where there’s direct officer supervision.” As of now, there haven’t been any cases of COVID-19 among incarcerated people or the facility’s employees.

The Dallas County sheriff was unable to provide Progress Texas with a statement, but in their press release, the facility states they’re continuing their approach of not accepting cases of Class-C misdemeanors (to reduce population), and have modified their intake process to screen people coming into the jail for coronavirus while providing “appropriate information” to their employees. It’s unclear whether they offer testing for the virus, or exactly what measures they’re taking as far as CDC recommendations go.

But like the Harris County jail, they have suspended in-person visitation (apart from legal counsel) in order to reduce the risk of transmission, and have offered video visitation for free instead. A spokesperson for Dallas County Jail did not respond to Progress Texas’ multiple requests for more information.

According to the Bexar County Sheriff’s Office COVID-19 Mitigation Plan, San Antonio’s county jail is taking measures to lower the risk of viral transmission by reducing the facility’s population through maximizing the “use of GPS release” for sentenced incarcerated people, and “minimizing custodial arrests by filing non-violent offenses at large.”

Like other facilities, incarcerated people will be screened for illness at a medical “command post” before they can enter the main facility. For those presenting with a fever or flu-like symptoms, they’re isolated separately from others in a “negative pressure cell while they undergo medical observation,” said a spokesperson for the facility in an email. Once medically cleared, they’re directed to a handwashing station before they can continue with processing, and employees and visitors undergo temperature checks before entering the facility. And according to their spokesperson, incarcerated people have access to soap and sinks in their cells to practice safe hygiene.

Despite these efforts, the presence of coronavirus inside facilities where social distancing and proper isolation or quarantine isn’t an option, was inevitable.

Harris County reported their first case of coronavirus two weeks ago and 30 others are showing possible symptoms — leaving as many as 500 incarcerated people who may have been exposed. Dallas County also reported several incarcerated people had tested positive and were quarantined separately from others. Those in close quarters to those who tested positive were screened for symptoms of illness, and the shared areas were cleaned and disinfected. But because these facilities house so many people, and because some may be released before others, efforts to contain the spread of illness are so important right now.

Some advocates and officials have been working together to limit the population of jails by encouraging facilities to release incarcerated people who have not been convicted and remain incarcerated because of their inability to afford bail.

However, under a new order issued by Gov. Greg Abbott, incarcerated people with any prior history of a violent conviction are unable to be released without paying bail — a measure that mirrors our current resource-based bail system by still allowing violent offenders to be released if they can afford it.

Even though steps have been taken in the past to ensure incarcerated people can afford the bail amount set for them, this is still a significant problem affecting thousands. And during a pandemic, these conditions aren’t only unjust — they’re dangerous.

As Texas faces this global pandemic, all Texans' health and safety must be taken into consideration, including those incarcerated. We need to listen to criminal justice reform advocates, who are asking for the release of more people held in jail before trial as well as older, ill prisoners who could be freed on parole.