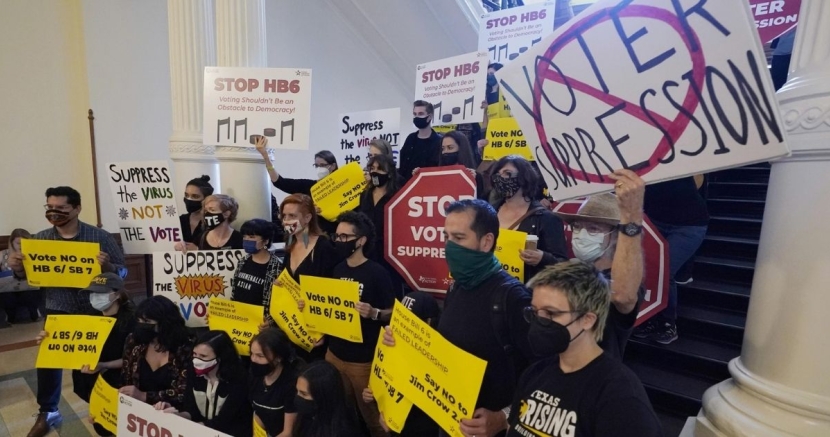 Anti-voter bills like SB7 and HB6 are part of a coordinated, national voter suppression effort.

Progress Texas filed complaints with the Texas Ethics Commission against The Heritage Foundation and Heritage Action for America, staunchly conservative out-of-state operations bent on perpetuating Trump’s Big Lie, for failing to register as lobbyists during the 2021 Texas legislative session.

A leaked video from Mother Jones shows Jessica Anderson, executive director at Heritage Action for America, bragging to donors about writing legislation that would make it harder to vote in eight key swing states like Georgia and Texas. Anderson says that the group penned “19 provisions” in Texas' massive voter suppression bill House Bill 6:

“We have 19 provisions in this bill that are written by the Heritage Foundation’s experts and seek to tighten up and to secure the Texas elections.”

Throughout the session Rep. Briscoe Cain, who chaired the House Elections Committee and authored HB6, had difficulty answering questions about his bill. Now, it’s easy to see why Cain was so confused about what’s in his legislation since he may not have written its main provisions.

HB6’s language has since been added to Senate Bill 7, which has passed both the Texas House and Senate and is on its way to being signed by Gov. Greg Abbott after negotiations end in conference committees.

Progress Texas filed the ethics complaint because Texans deserve to know who is behind these voter suppression bills.

Transparency in the legislative process is crucial. Texans should know who is writing or influencing legislation so that they can connect the dots and understand the true motivations behind certain laws. The leaked video of Heritage Action further proves that anti-voter bills like the ones we’re seeing in Texas are part of a coordinated, national voter suppression effort.

Far-right Washington, DC groups like The Heritage Foundation should not have more of an influence over Texas law than the state’s own voters. Anderson even said in the video that the organization’s “sentinels” give their model legislation to state legislatures to “give it a grassroots vibe.”

Texas Republicans have prioritized these attacks on our democracy in a desperate attempt to hold onto power. In 2020, Texans voted in record breaking numbers across the state. Now, the Texas GOP is scared of the collective power of the progressive movement.

SB7 is a racist bill that would create new restrictions on early voting, limit how voters can receive applications to vote by mail, and grant partisan poll watchers more power over voters and poll workers themselves. The bill would have a disparate impact on people of color and folks with disabilities and make it harder for Texans to vote.

Not only do Texans deserve to know who is behind this type of legislation, but we also deserve competent lawmakers who prioritize bills that address the issues most important to their constituents instead of legislation that attacks our rights.