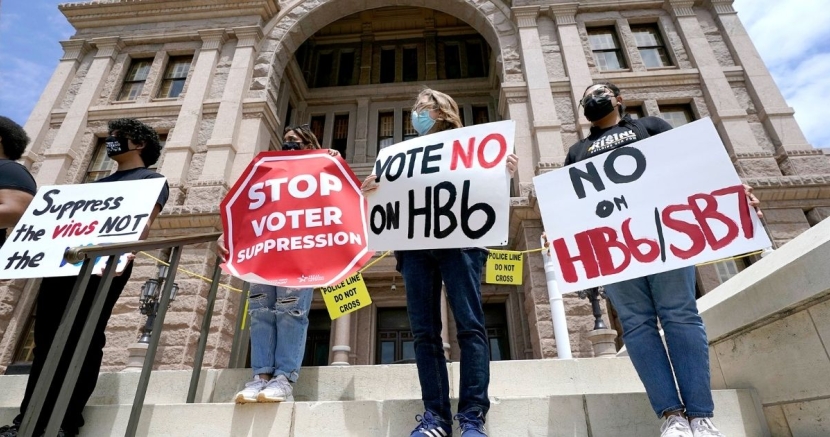 In 2020, Texans voted in record breaking numbers across the state. And as a result, the Texas GOP has decided to focus this legislative session on the many ways they can suppress the vote by increasing voting restrictions and creating criminal penalties for minor voting errors.

One of the most harmful bills this session, HB6 and its Senate companion bill SB7, has passed both the House and the Senate and will soon be signed into law by Gov. Abbott. The racist bill, filed by the Chair of the House Elections Committee Briscoe Cain, would create new restrictions on early voting, limit how voters can receive applications to vote by mail, and grant partisan poll watchers more power over voters. The bill is similar to legislation that has been filed in other states like Georgia, and would make it harder for people of color and folks with disabilities to vote.

Recent footage released of the right-wing, dark money group Heritage Action shows that the legislation has a shady backstory.

In a private meeting last month in front of donors, the organization’s executive director disclosed that the group had a hand in crafting voter suppression bills filed in numerous states, including Georgia and Texas. The executive director went as far as to say:

“In some cases, we actually draft them for them, or we have a sentinel on our behalf give them the model legislation so it has that grassroots, from-the-bottom-up type of vibe.”

In the clip, the director also says that the organization wrote “19 provisions” in Texas’ voter suppression bill HB6.

The video proves what voting rights advocates have been saying all along: anti-voter bills like those in the Texas legislature are part of a coordinated, national voter suppression effort. It’s easy to see why the bill’s author, Rep. Briscoe Cain, has been so confused about what’s in his bill. He may not have even written significant chunks of it!

During a Senate hearing on SB7, Rep. Jessica Gonzales grilled Cain on the language included in the bill that could incriminate individuals simply for helping a representative get re-elected. During the hearing, Gonzalez stated that the attorney general noted in the event that a representative's spouse was on the insurance plan of the representative and helped get their spouse re-elected through blockwalking, they could potentially be committing a crime in the way the code is currently written.

This prompted Cain to ask in confusion what section of the code within the bill would be able to do this, since he was unaware that this could be a possibility. During this interaction, Cain made it clear he did not understand his bill or its implications. And this was not the first time it appeared as though he had not read the bill in its entirety.

Heritage Action and other dark money groups should not have a direct hand in crafting legislation that affects our daily lives. We elect state legislators with the intent that they themselves will act as lawmakers and write legislation that is actually beneficial to Texans. The Texas GOP clearly does not operate with that intent, and instead works with dark money groups to draft bills to benefit the party’s own interests.

Texans deserve competent legislators who work to write and pass legislation meant to help our state. As activists fight these bills at the state level, Americans need federal action to protect voting rights. Congress needs to pass the For the People Act immediately.