One chart that proves Texas is a battleground state 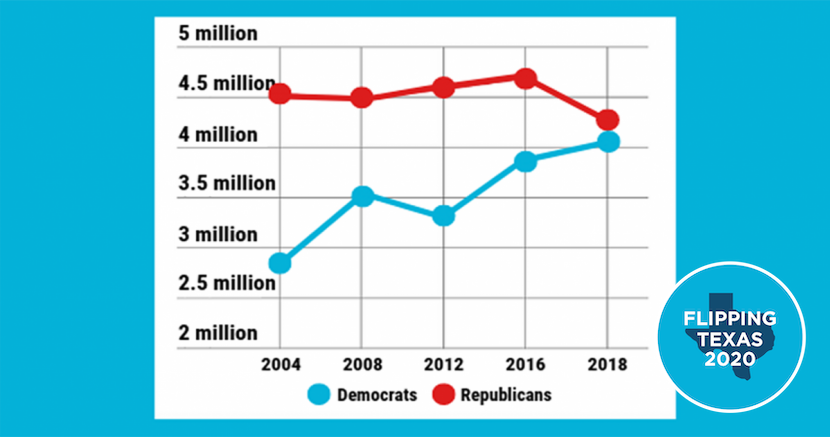 Ed Espinoza
The electorate in Texas is growing, and the growth seems to be entirely in one direction.

By comparison, the 2010 and 2014 elections were typical midterms in which turnout was so low that it ranked among the worst in the nation. Thus the 2018 midterm election is an anomaly.

But it is precisely because it is an anomaly that it can tell us some things heading into the 2020 election, whereas our previous midterm turnout dipped so low that it was only relevant to sizing it up with other midterm elections.

That's why we went through the exercise to see what a line graph would look like if we took presidential elections since 2004 and layered in the 2018 data. And what the data shows is a remarkable pattern: the electorate in Texas continues to grow, and the growth seems to be entirely in one direction.

The chart tells us 2 things:

Let’s dig into these numbers…

From 2012 to 2018, Texas Democrats increased their vote haul by 737,508 votes statewide and almost all of that increase came from the state’s biggest counties. There is a reason for that – it’s where nearly all of the state’s growth is taking place.

The big counties now account for roughly 70% of the Texas population, and Democrats have gotten much better at running up the score in these areas.

In 2016, Hillary Clinton bested Barack Obama’s 2012 performance in Texas by 569,744 votes. Of that number, 568,073 came from the state’s 20 largest counties. Thus, a mere 1,671 votes came from the state’s other 234 counties (and before you think those were all Republican crossover votes, let me point out that Trump’s 2016 performance bested Romney’s 2012 haul by 115,204 , and it’s pretty unlikely that a substantial number of Texas Republicans were crossing over to vote for Clinton).

Democratic turnout in Texas is higher in a presidential year.

It may be news to some outside of our state, but keen observers of Texas elections know that presidential years are generally better for Democratic turnout. What may be less obvious is that Texas, one of the fastest-growing states in America, has added so few Republican voters to the equation.

Yes, Texas is a battleground state, and the numbers prove it.