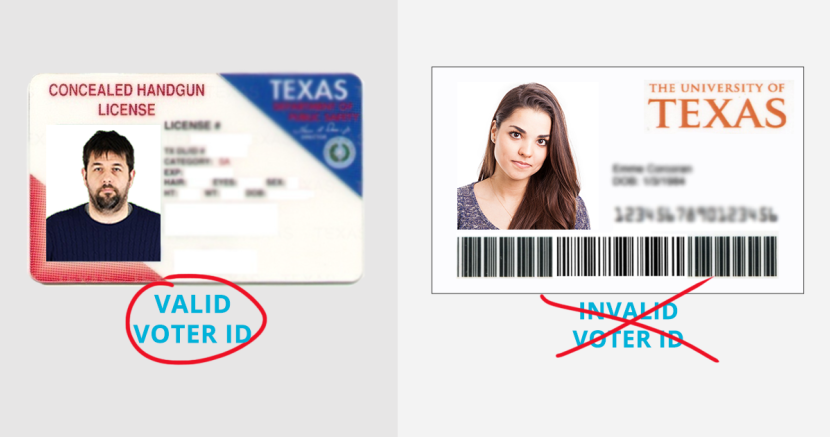 Republican Voter ID laws: better on a bumper sticker than they are in real life.
Updated May 25, 2017: As of 2017, yet another court decision states that the Texas Voter ID law intentionally discriminates. In response, the State Legislature has passed a bill that seemingly fixes the problems. Not included in the fixes are student ID's - as Republicans argued that different schools have different ID policies, and that the process may not be secure. Gun licenses are still cool, though.
Yet back in 2015 when the legislature passed campus carry, it did so with uniform standards that schools were mandated to follow. Legislators could have done the same thing this time with uniform standards for Student ID's, even requiring that they follow the same production standards as gun licenses.
But then, ya know, more students might end up voting...
Original story, August 10, 2015: Voter identification laws are one of those Republican ideas that are better on a bumper sticker than they are in real life. Because when it comes to actually making the policy, the devil is in the details.

In the case of the 2011 Republican voter ID law that was recently struck down in court, those details included a provision in which acceptable forms of identification included gun licenses but not student ID’s, even though student ID's had been accepted in years past.

It is a law that Ted Cruz and Rick Perry love to tout.

But the law is so bad that the Fifth Circuit Court of Appeals, one of the most conservative courts in the nation, ruled that the Texas voter ID law violates the Voting Rights Act which is a law that prohibits discrimination in voting.

When Texas Governor Greg Abbott was Attorney General, his office had a markedly low number of voter fraud convictions, a total of 46 over 12 years. And even if the 2011 voter ID law had in place during that period, it would have only stopped two of those cases.

Yet the voter ID law codified such a narrow interpretation of acceptable identification that the it left 600,000 Texans without the right ID needed to vote. All to supposedly stop fewer than four people per year from casting inappropriate ballots.

The real reason for voter ID is to make it harder for certain communities of people to vote.

The law disproportionately impacts minority voters, young people, renters, and low-income senior citizens – you know, traditional Democratic voters. These are people who might have some kind of ID, just not the kind that Republicans were willing to accept.

Voter ID may have contributed to a more than 10% drop in overall electoral participation, taking the state's already rock-bottom voter turnout and dropping it even lower, from 37.5% in 2010 to 33.6% in 2014.

Even just talking about the law has discouraged voters from participating, and may have changed the outcome of an election.

Texas’ strict voter identification requirements kept many would-be voters in a Hispanic-majority congressional district from going to the polls last November — including many who had proper IDs — a new survey shows.

And the state's voter ID law – coupled with lackluster voter education efforts – might have shaped the outcome of a congressional race, the research suggests.

It should come as no surprise that the current Texas RepublicanParty platform calls for an end to the Voting Rights Act.