There are two sleeping giants in Texas 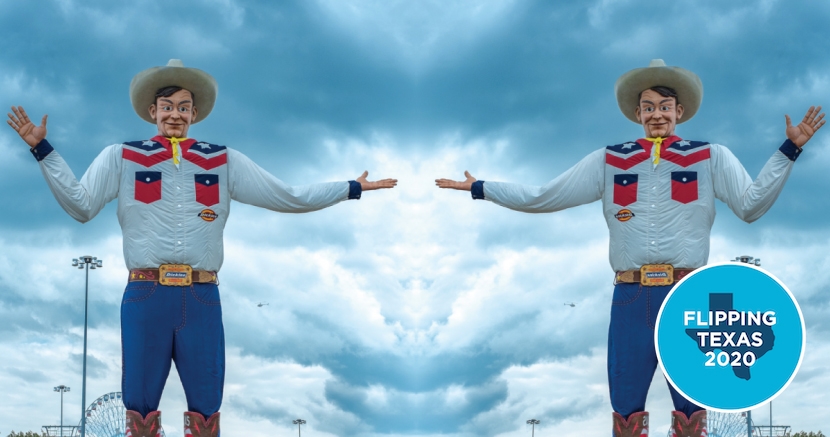 Ed Espinoza
More than 1.8 million people who cast ballots were new voters in 2016

Editor's Note: This blog was originally published on Oct. 13, 2017 and has been rereleased to support our new report Flipping Texas in 2020.

In recent years, there has been a lot of talk about the "Sleeping Giant," a growing Latino population that will become a political force to change the landscape of Texas politics.

But there is another giant in Texas – and it's composed of those people who have moved here from other states and are contributing to our status as the fastest growing state in the nation. Let's call this the "New Giant."

Texas saw signs of both giants awakening in the 2016 election. According to the Texas voter file, more than 1.8 million people who cast ballots were new voters. The vast majority – 76 percent – were 49 years or younger. The majority of which live in the state's 10 most populous counties.

And these voters certainly had a noticeable impact on the election because, according to the Texas Secretary of State historical election returns, Democratic performance increased by 500,000 votes in 2016.

The question now is will those voters keep coming back? Under normal circumstances, surges in presidential election years don't always translate into gains in the following midterm election. But this year has been anything but normal, and progressive-minded voters around the country – even in Texas – are energized to send a message.

Those 1.8 million new voters were a Super Giant of sorts, the Sleeping Giant and the New Giant combining to make an impact on the election. The age factor of this Super Giant is notable because younger voters are likely to be more receptive to progressive politics – even in Texas. Another important item: they are "cutting the cord" of traditional media at a higher rate than older voters.

Younger audiences are not watching nearly as much broadcast or cable TV these days, preferring to get their news and entertainment online. And while Nielsen ratings are only down one percent, the likes of MTV have seen a drop of 35 percent. Comedy Central is also down. "Cutting the cord" means that a Democratic candidate can wage a competitive campaign to these voters without having to go toe-to-toe with Republican Governor Greg Abbott's fundraising abilities.

Republicans have a problem

But what about the notion that those Democratic gains in 2016 were simply due to Republicans crossing over to vote against Trump? The data doesn't support that assumption. Donald Trump not only did as well as any Republican in Texas, he actually did better than Mitt Romney, John McCain, and George W. Bush. Also since when have Texas Republicans been so high-minded as to buck a national trend and vote against their nominee? Never.

But even with his gains, Republicans have only added 158,130 votes in presidential elections since 2004. Compare this to Democratic Party adding more than one million (1,045,164 to be exact) to its column. The Republican vote haul is stagnant, which is undoubtedly a troubling stat for them given that Texas has been the fastest growing state in the nation for about a decade.

Put simply, the reason Democrats are performing better is because the electorate has expanded. And while the media has made a sport of beating up on Texas Democrats, the Party and its allies (including Progress Texas) have been moving forward to engage and mobilize new progressive-minded audiences. This has led to important electoral gains around the state, particularly notable in Houston and Austin, with this expanded electorate contributing to narrowing the gap.

But being against the increasingly racist policies of Trump and his Republican Party isn't enough. Democrats need to also be for something. It's important to demonstrate progressive values and to identify with audiences who want to vote for people who will fight for them. As Beto O'Rourke recently stated, "everybody's bullshit detector is as sensitive as it has ever been." Successful candidates need to be bold, authentic, and fearless messengers.

Have the giants awakened? Will they reappear in a midterm election? These are voters that need to be communicated with in a meaningful way, and not necessarily through expensive and increasingly ineffective TV buys. No matter how it's done, the presence of both of these giants are important bedrocks for building progressive power in Texas – and absolutely essential to Democratic victory in 2018 and beyond.