Texas: 2016 first-time votes favored Democrats by margin of 5-to-1 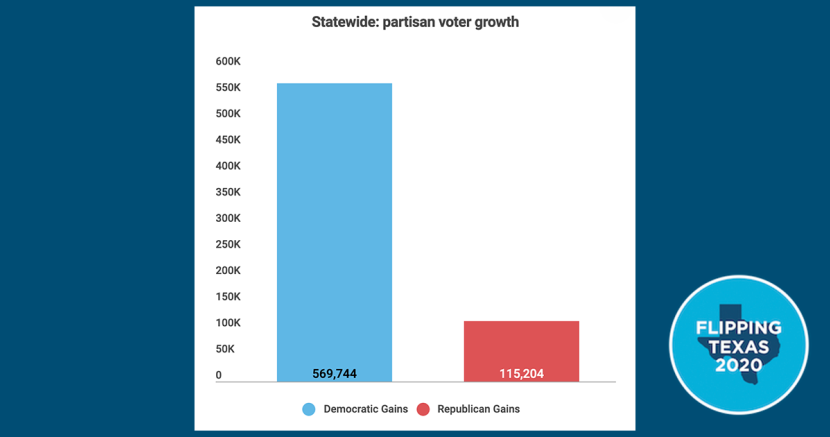 Editor's Note: This blog was originally published on Oct. 20, 2017 and has been rereleased to support our new report Flipping Texas in 2020.

It is well known that Texas has been one of the fastest growing states in America for some time now. Our explosive population growth has brought diversity in many ways - including political thought.

A Progress Texas of the 2016 election returns finds that there were 1.8 million first-time voters in 2016 and they contributed to a wave of support for Democrats. Compared to the 2012 election, new Texas voters in 2016 cast ballots that created a growth margin favoring Democrats by a ratio of 5-to-1.

The lopsided growth favoring Texas Democrats may come as a surprise to some, but it shouldn't. Because while Republicans maintain a stranglehold on Texas, the party's vote haul has been stagnant for a decade. Republicans have essentially received the same number of votes in every presidential election since 2004. But the reason they keep winning is math: Democrats just had too much ground to make up. That is changing rapidly.

We wanted to find out more about these voters. And since more than 70 percent of the state's population lives in the 20 most populous counties, we zeroed in on those areas to see what the 2012 to 2016 growth looked like on a county by county basis. Yes, much of the Democratic growth comes from where you might expect: big cities, Latino-majority regions, and blue counties in general. In these areas Republicans actually experienced an overall net loss of votes:

But then we examined the top 20 counties based on how they voted in the past six elections - all Republican, all Democratic, or both - and grouped them accordingly. Then we measured the increase in partisan performance from 2012 to 2016.

This led to the most surprising revelation: new voters in red counties are flocking to Democrats over Republicans by a rate of better than 3-to-1.

What this data reveals is that Texas is not only a growing state - it is a changing state. And these charts should give Democrats a reason to be optimistic. It should also give Republicans a reason to be concerned.

PS - if you're interested in the county breakdown of partisan performance changes from 2012 to 2016, I've broken them out for you here: