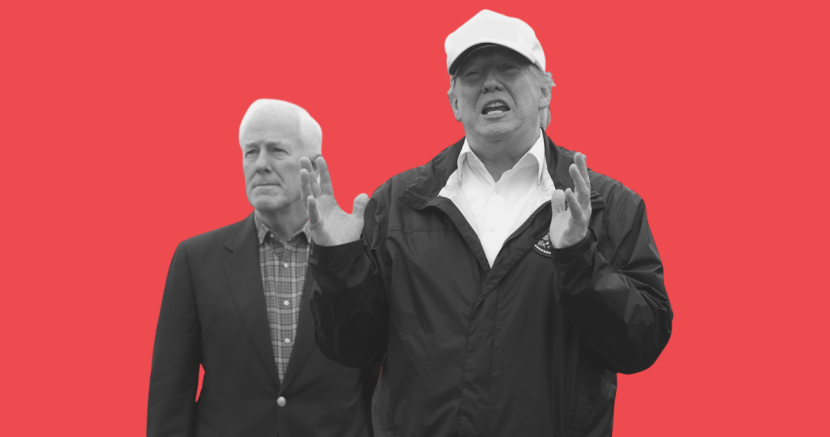 Abby Springs
Make no mistake — Cornyn is in Trump’s pocket.

Now that Democratic U.S. Senate candidate MJ Hegar is rapidly closing in on John Cornyn in the polls, Cornyn has decided that the last minute is the perfect time to finally take a stand against Trump. But after voting with Trump 95% of the time and consistently putting his wealthy corporate donors over the needs of Texans, it’s a little too late.

In a meeting with the Fort Worth Star-Telegram editorial board, Cornyn claimed that his relationship with Trump is “maybe like a lot of women who get married and think they’re going to change their spouse, and that doesn’t usually work out very well.” Cornyn also said that “when I have had differences of opinion, which I have, (I) do that privately.”

Misogynistic metaphors aside, Cornyn’s comments exemplify the cowardice that has hurt so many Texans over the 18 years of his tenure in office. If you care about equality, morality, or just basic human rights, speaking out against Trump’s harmful policies and rhetoric should be the bare minimum.

Now that his seat is at risk, Cornyn wants to pretend like he has a backbone. Except his claims are just plain false.

Don’t fall for Cornyn’s rewrite of history at the 11th hour. Here are some of the most egregious votes Cornyn took to stand with Trump and against Texans.

Repealing and replacing the ACA has been one of Trump’s signature campaign promises for the last five years. However, repealing the ACA would result in 20 million Americans losing their health insurance coverage, a number that’s only gone up due to the pandemic. Texas already has the highest uninsured rate in the nation, and repealing the ACA and removing protections for people with pre-existing conditions would be devastating for our state. Cornyn would be happy to see that happen, since he’s voted not one, not two, but 20 times to repeal or defund the Affordable Care Act.

At this point, the phrase “border wall” is synonymous with Trump. His racist policy has resulted in billions of dollars wasted, land stripped from Texans on the border, and damage to the south Texas environment. This policy has become a national issue, but it’s one that affects Texans the most. And where is Cornyn? Voting with Trump to throw away billions of dollars into a wall that is nothing but a racist symbol against Hispanic and Latinx Texans.

In order to successfully steal the Supreme Court Seat vacated by the late Justice Antonin Scalia, Republicans had to repeal a law that required 60 votes to achieve cloture for a Supreme Court confirmation. Cornyn supported Trump’s nominee and voted with the president to force Justice Gorsuch onto the court, paving the way for court decisions that have stripped away the rights of Texans across the state. Cornyn is now flip flopping on his position from just four years ago and backing Trump’s illegitimate nominee Amy Coney Barrett. He and his fellow Senate Republicans are trying to push through her nomination in the midst of an election, taking away the voice of the American people.

4. Cutting taxes for corporations and billionaires

Trump promised that his 2017 tax cuts would be a boom to the economy and a benefit to working Americans. Unsurprisingly, he was wrong. The tax cuts had virtually no effect on economic growth, 60% of savings went to the top 20% of Americans, and the corporate tax rate decreased by 40%. Cornyn voted in favor of these cuts for his own wealthy, corporate donors, instead of advocating for the needs of working Texans.

5. Helping Trump get away with high crimes and misdemeanors

When Trump was impeached at the beginning of this year, we saw which Senators were willing to sacrifice their integrity for the sake of protecting a corrupt president. John Cornyn was one of them. Despite Trump’s obvious solicitation of foreign interference in the 2016 election, Cornyn voted against impeaching the president, proving that he will do anything to serve a president who only serves himself.