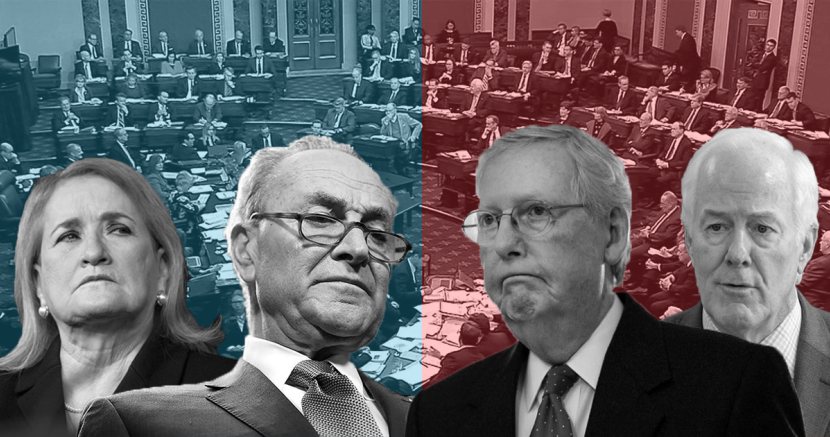 Wesley Story
Senators swore an oath to uphold “impartial justice.” It’s unfortunate only some of them are upholding that oath.

In December, Donald Trump was impeached by the U.S. House of Representatives, becoming the third president in our nation's history to be formally charged under the Constitution’s ultimate remedy for high crimes and misdemeanors.

After weeks of back and forth between the House and the Senate, the House delivered the articles of impeachment to the Senate on January 15.

This delay was due to valid concerns from House Democrats about whether Senate Republicans were committed to conducting an impartial trial complete with witnesses and evidence. Unfortunately, those concerns were never really resolved, and now, the ball is in the Senate’s court.

What is the Senate trial for and how is it supposed to work?

There’s been some confusion about the impeachment process, so hopefully we can clear up a few things. Donald Trump is impeached. That is a fact. It has already happened and is not something the Senate trial will determine.

The Senate trial will, however, determine whether or not Trump will be convicted and removed from office. At the end of the trial, once both sides have made their cases, the Senate will hold a vote on whether to convict Trump. This vote is what will determine whether or not he is officially removed from office. A conviction would require 67 votes, or a two-thirds majority, in the Republican controlled Senate.

It’s important to understand that this trial, which is being overseen by Chief Justice John Roberts, is supposed to remain fair and impartial. Days before the trial began, members of the Senate even took an oath to uphold "impartial justice” during the trial.

Many are looking to Bill Clinton’s 1999 impeachment trial as a model. In Clinton’s impeachment trial, witnesses were called in to testify. Senators committed themselves to finding the facts, hearing from people with firsthand knowledge of what had happened, and uncovering all of the evidence necessary to make a decision. That is how the Senate should be approaching this trial. This is how trials are meant to be conducted, whether they’re for impeachment or otherwise.

But already, McConnell’s impeachment rules have modified this precedent.

Senate Republicans continue to cover up for Trump.

The first week of the impeachment trial is almost over and Republicans have already made it clear they do not intend to uphold their oaths.

Senate Republicans are preventing a fair and impartial trial by refusing to allow witnesses, even when a bipartisan majority of Americans want to see new witnesses testify in the trial.

Not only are Republicans refusing to allow new witnesses, but they’re complaining about there not being any new information. Texas Sen. John Cornyn had the audacity to complain that he had heard “nothing new” after voting against bringing in witnesses and documents.

Cornyn also tried to discredit the case against Trump by saying that it relied largely on second hand witnesses. But that is only because the Trump administration has refused to turn over documents and allow witnesses with firsthand knowledge to testify.

Silence speaks louder than words, and the fact that these witnesses are being silenced is further evidence that the administration has a lot to hide.

Republican senators are playing political games in an effort to discredit the trial, but the public can see right through their deceit. It’s clear they are concerned about what they will find if they allow more evidence to come forward.

As previously mentioned, the senators swore an oath to uphold “impartial justice.” It’s unfortunate that only some of them are upholding that oath. Not only are Senate Republicans rejecting their duties, but they’re hurting our nation in the process.

We deserve better from our senators.

Here at Progress Texas, we believe the Senate should conduct an impartial trial, hear from witnesses, and gather all of the facts. We also believe that any senator putting their loyalty to Trump before their loyalty to the country is not fit for office. And come Election Day in November, we must hold those senators accountable.

The impeachment investigation has already shown us that Trump betrayed our country by once again asking a foreign nation to interfere in our elections. His actions cannot be allowed to stand. And by refusing to hold him accountable, Republican senators are putting the future of our democracy at risk.

The fact is, no one is above the law, not even the president. And in this defining moment, the decisions our leaders make moving forward will place them on either the right or the wrong side of history.