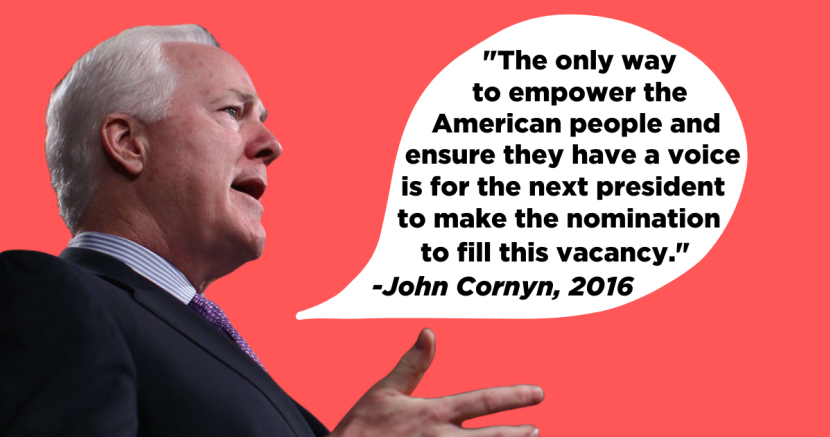 Last weekend, our country was turned upside down as we mourned the loss of Supreme Court Justice Ruth Bader Ginsburg, a champion for gender equality and a lifelong fighter for women’s rights.

But after the news broke on Friday night of Ginsburg’s death, Senator John Cornyn took no time at all to fall in line with Senate Majority Leader Mitch McConnell and commit to confirming Trump’s next Supreme Court nominee. According to Cornyn, Trump is not only free to nominate a justice in an election year, but also if he loses the November election.

Clearly, Cornyn didn’t always feel this way. Just take a look at his statements from 2016 on nominating a Supreme Court nominee in an election year:

“The only way to empower the American people and ensure they have a voice is for the next President to make the nomination to fill this vacancy.”

“Confirming a new Supreme Court Justice during a presidential election year for a vacancy arising that same year is not common in our nation's history; the last time it happened was in 1932.”

“At this critical junction in our history, the American people should have the opportunity for their voice to be heard. Senate Republicans are committed to making sure that they do.”

However, now that the numbers are on their side, Senate Republicans don’t actually care at all about the American people and their voices. Considering 62% of Americans agree that the winner of the November election should fill this vacancy — including half of Republicans — they should find some integrity and honor the rules that they made up just four years ago.

Unlike our spineless senator, MJ Hegar is prepared to stand up against corrupt Washington leaders like Mitch McConnell. MJ is no stranger to tough fights, and she’s been a champion of gender equality, economic justice, and health care reform. She’ll vote to confirm a Supreme Court nominee with those beliefs and values — Texas values.

With a vacancy on the Supreme Court, too much is at stake this election for us to sit out. The Affordable Care Act, abortion rights, and discrimination protections could all vanish if we don’t elect a Democratic executive and legislative branch in November.

That means voting blue up and down the ballot, from Joe Biden to MJ Hegar to the Democrats running in the Texas House. We need record-breaking turnout if we want to make 2020 the year Texas finally flips blue.

For more information on voting in the 2020 election, visit govotetexas.org.