How many lives is (a possibility of) “boosting” the economy worth? Texas conservatives are misleading the public. 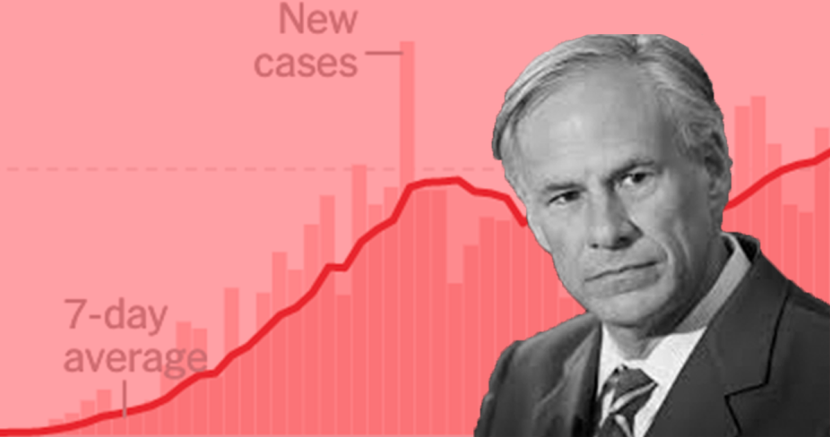 Wesley Story
Gov. Abbott has discussed how a spike in infection rates will occur because of increased testing, but has been less clear about the repercussions of reopening.

A leaked recording from a call with Texas Legislators on Friday, May 1st revealed that Gov. Greg Abbott knows reopening puts more Texans at risk. In the call, Abbott admits reopening will lead to an increase in COVID-19 cases.

BREAKING: As @GovAbbott reopens the state in the midst of a rising infection and death rate, leaked audio from a call with Texas Legislators reveals that he knows reopening puts more Texans at risk. #txlege pic.twitter.com/kTK4M8gpSY

When a government official admits that more people will get sick and die as a direct result of their actions, that is a big deal, and not something that should be glossed over. It’s quite literally a choice between more lives or more deaths, and our governor chose more deaths.

Up to this point, Abbott has downplayed the impact of his decision. He’s discussed how a spike in infection rates will occur because of increased testing, but has not made it as clear to the public that his decision to reopen will also mean an increased spread of COVID-19.

In the audio, Abbott also says “the goal never has been to get COVID-19 transmission down to zero.” If that was never the goal, why were so many Texans surprised to hear it? Maybe that should have been communicated more clearly. Other countries have done it, so why can’t we?

Throughout this crisis, there’s been a lack of clear communication between our state leaders and Texans concerning the pandemic and the implications of their actions. That has not been by accident. Just look at how Abbott announced his stay-at-home order. His refusal to actually say the words “stay at home” was clearly petty partisanship and an effort to please Trump. But whether it’s for political purposes or an understanding that Texans will not approve of his actions if they have all the facts, he’s not been straightforward.

So here are the facts, since you’re not likely to hear them from our supposed “leaders”:

It was only around the time the state began reopening that testing ramped up compared to other states. Prior to that, Texas was ranked 48th in testing per capita. And even though we’ve doubled our testing numbers in the past couple of weeks, we’re still 40th as of this writing.

What folks seem to misunderstand is that doubling a really small number still results in a small number, but that won’t stop Abbott and other conservatives from continuing to use it as a justification for reopening. This goes to show that our state has a lot more to do before we’re on par with most of the nation. Abbott’s decision to reopen at this point, before testing is ramped up to a more reasonable number, was terribly misguided.

2. Infection rates and deaths have increased.

Abbott likes to point out how Texas has seen a lot of people recover from the virus. But in order for people to recover, they have to have gotten sick in the first place.

This post from Abbott shows how he’s twisting the numbers to support his narrative. Recovery numbers vs the number of active cases is an almost meaningless comparison that provides no real insight into what’s happening in our state.

The number of Texans who have RECOVERED from #COVID19 now exceeds the number of active COVID cases for the past 2 days.

That’s exactly what we want to see.

Texas ranks 3rd highest among states for number of people who have recovered from #coronavirus. #txlege

The fact of the matter is, Texas reported its highest daily number of COVID-19 deaths just a day before Abbott’s stay-at-home order expired and the state began reopening. And since reopening, the number of cases have continued to rise. Over the first weekend of reopening, Texas health officials reported the greatest two consecutive-day gains in the number of new COVID–19 cases, with more than 2,000 new cases added on May 2 and May 3.

Keep in mind that this comes before the jump we are expected to see as a result of this decision. Yet before even knowing what that spike will look like, Abbott has decided to speed up his plan to reopen.

I thought we were waiting to see if the first round of re-opening caused COVID-19 spikes before making decisions on additional openings? It's been four days. #txlege

In addition to these numbers from our state, the Trump administration’s very own models are projecting a steady rise in the number of coronavirus cases and deaths over the next several weeks. According to an internal document, the daily death toll will reach about 3,000 by June 1.

3. Abbott has not taken all the necessary steps.

As mentioned before, a governor admitting that his actions will lead to an increased spread of a virus ultimately resulting in more deaths is a big deal. But it’s an even bigger deal when that governor has not done everything in his power to reduce that spread.

There are many steps Abbott could have and should have taken before making this decision. Here are a few of them:

4. Be wary of graphs. They don’t always paint the full picture.

We cannot stress how important data is and our leaders should be using it, along with science and medical expertise, to inform their decisions. But, it’s also important to understand what exactly each chart is showing, and how it can be used to advance a specific narrative.

Here’s a really helpful video from Vox about what different graphs mean and how coronavirus charts can mislead us:

Data is crucial to understanding this virus and tackling it. But data can also be used to dehumanize and mislead. Deaths become “upticks” and lives become numbers on a chart. Abbott has been robotically throwing out numbers at the beginning of his press conferences without giving much context as to what they actually mean. It’s a bit unsettling.

In the recording, he even discusses how the decision to reopen “ipso facto,” or by the fact itself, means an increased spread. Very matter of fact. No emotion or concern in sight. These are people’s lives we’re talking about.

5. Conservatives are presenting a false choice.

One of the most significant ways conservatives have managed to mislead Texans is by presenting solutions as if they’re a choice between lives or saving the economy. This is a false choice. They are conveniently leaving out the fact that even by reopening, boosting the economy is not a certainty. Reopening a business with no customers doesn’t really help business owners. And if businesses lose money and are forced to fire workers again, then we’re back where we started and all of our efforts were for nothing.

Not to mention that if cases go back up and the state has to close again, likely for a longer period of time, then the economy will suffer even more because of these decisions. Our state is risking lives on a hope that the economy will improve. It’s bad enough to say that Republicans are putting profit before people. But in this case, they’re putting a chance at a profit before people.

So the question we should all be asking is, how many lives is a possibility of boosting the economy worth to them? 1,000? 10,000? It horrifies me to know that we might actually end up with an answer.

Texans need the facts, not the conservative spin.

Texans deserve to have the facts laid out to them in order to make the best decisions they can about their health and safety. They deserve to know the implications of our leaders' decisions, especially when those decisions involve more illnesses and deaths.

The human cost is not a footnote in Abbott’s decision to reopen. It’s a matter of life and death and should be treated as such. Our conservative lawmakers are playing politics with people’s lives and gambling Texans’ health and safety for a chance at boosting the economy. We deserve better. And we deserve the truth.