Medicaid expansion could give insurance to over one million Texans 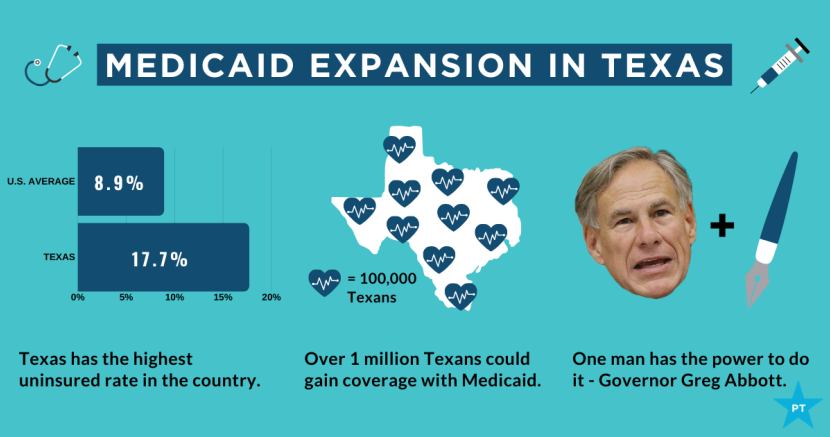 Abby Springs
All it would take is Gov. Greg Abbott’s signature.

If you could sign a piece of paper right now and instantly make health insurance available to over one million Texans, would you do it?

It’s an unfortunate fact that Texas has the most uninsured residents in the nation, at over five million people, as well as the highest uninsured rate at almost twice the national average. However, Republicans have consistently resisted a simple change that would expand health insurance coverage and save thousands of lives during the coronavirus pandemic — Medicaid expansion.

What is Medicaid expansion?

However, the U.S. Supreme Court overturned this part of the bill, giving states the choice to opt out of participating. Unsurprisingly, our former governor Rick Perry rejected this expansion of Medicaid eligibility. Gov. Greg Abbott has continuously come out against the program, mostly due to petty partisanship and Medicaid’s association with Obama.

Today, Texas is one of 14 states that has refused to expand Medicaid. As a result, those states have double the rate of uninsured people below the poverty line.

Why should Texas expand Medicaid?

Medicaid is primarily funded by the federal government, and Texas would gain an estimated $100 billion in federal funding if it chooses to expand the program. This would also save $5.5 billion each year in hospital costs for uninsured visits. Furthermore, Texas is currently paying $36.2 billion to help expand Medicaid in other states, without seeing any benefit ourselves.

The economic upside is a plus, but the most crucial benefit of expanding Medicaid is the number of lives it could save. According to one study, over 700 people in Texas die each year specifically because Medicaid hasn’t been expanded. This number is almost certain to increase due to COVID-19. Expanding Medicaid would instantly make 1.1 million Texans eligible, giving them access to essential and affordable health care.

During a pandemic, having insurance is key in stopping the spread and saving lives. When you have insurance, you can afford to see a doctor about your symptoms, get tested for the virus, or go to the ER if you’re dangerously sick.

We live in a country where your health insurance is often tied to your job, and millions of people have lost theirs over the last month. Those without health insurance are most likely to be working essential, low-wage jobs like delivery drivers or grocery store clerks.

Expanding Medicaid just makes sense — it would save lives and save money. Plus, it’s the moral thing to do. Everyone deserves access to healthcare, especially during a global health crisis.

How can we expand Medicaid during a pandemic?

Expanding Medicaid doesn’t require a special session or ballot measure — Abbott could sign his name and instantly expand Medicaid tomorrow. Perry used his authority to reject the expansion in 2012, and Abbott could use his to finally accept it. All it would take is an executive order.

In the past, Abbott has been opposed to Medicaid expansion. However, the coronavirus crisis is unprecedented, and it’s showing the weaknesses of our current healthcare system. If there was ever a time to support expanding public health insurance coverage, it’s now. The idea is popular, too — 64% of people in states that haven’t expanded Medicaid think it’s a good idea.

Keeping Texans needlessly uninsured during a pandemic is dangerous, irresponsible, and makes no sense. Gov. Abbott can prevent deaths and boost our economy by expanding Medicaid. He just needs to put partisanship aside and do what is right for all Texans.