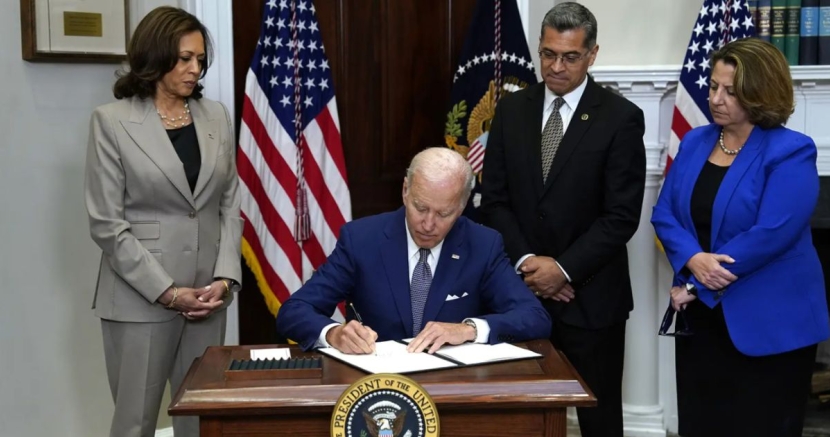 Emily Clark
What it does, what it means for Texans, and where abortion law stands now.

Last week, President Biden signed an Executive Order on Protecting Access to Reproductive Healthcare Services, aiming to expand access to abortion pills, increase birth control coverage, and ramp up legal assistance for those obtaining or assisting with an abortion.

Here’s an overview of what’s included in the order:

While Biden’s action was a necessary step in advancing reproductive healthcare, it does little to help those in states with near-total abortion bans, like Texas. Our access to birth control might get better and our patient and consumer privacy might improve, but abortion will still become illegal in Texas.

The silver lining? Biden and the HHS have made it clear that federal law preempts any state law restricting access to abortion in emergency situations. That means providers can feel more secure when offering legally mandated, life- or health-saving abortion services in emergencies.

In Texas, that clarification may not help as much as we’d like. The ban currently in place in our state already offers an exception for abortion in life-threatening situations. The main issue has been interpreting what passes as “life-threatening.” Abortion restrictions have created an “impossible choice” for doctors providing care. Rather than terminating a pregnancy when the patient deems it best, doctors must wait until the patient nears death, lest they face legal challenges.

Biden’s order might better protect doctors but, without total assurance, such as a federal law legalizing abortion, Texas providers will be forced to continue balancing legal and ethical obligations.

To be clear, abortion is safe, necessary, and should be available to all people, regardless of zip code, age, income, race, or health situation. Protecting emergency abortion is below the bare minimum.

A year ago, abortion was legal up to 20 weeks in Texas. With the ceaseless whirlwind of legislation and lawsuits, the past year has brought, abortion law in Texas has become difficult to follow.

Last Summer, Gov. Greg Abbott and the Texas Legislature passed SB 8, outlawing abortion after six weeks of pregnancy. At the time, it was one of the most restrictive abortion laws in the nation. Other states quickly followed suit.

During that same period, Texas restricted access to abortion medications and passed the abortion “trigger law,” which would outlaw abortion from the moment of fertilization if Roe v. Wade was ever overturned.

On June 24, the Supreme Court overturned Roe v. Wade. This set in motion Texas’ abortion trigger law, meaning Texans are weeks away from a total abortion ban if no intervention occurs. For now, the 6-week ban remains in effect.

After seeing the decision, Texas AG Ken Paxton resurfaced a 1925 abortion law that outlawed abortion in Texas. Providers, activists, and attorneys argued the century-old law was repealed when abortion was legalized with the Roe decision in 1973.

Last Friday, the Texas Supreme Court sided with Paxton, allowing the 1925 abortion law to go into effect. The law exposes abortion providers to lawsuits and fines if they continue to perform the procedure but stops short of criminal enforcement (for now).

Yesterday, Paxton filed a lawsuit against the Biden administration over their guidance guaranteeing a right to emergency abortion. He claims it “violates the state’s ‘sovereign interest in the power to create and enforce a legal code.’”

Far-right representatives have tried to frame Biden’s executive order as extremist, but that couldn’t be farther from the truth. Biden’s action does nothing to override state law, doesn’t legalize abortion, and is far from what we’ve all been begging for.

If anything, the action should be considered a first step. Until Texans are guaranteed access to abortion at whatever time they deem personally necessary, our bodies and our futures are not in our control.

We need comprehensive federal action now. Congress and the Biden Administration must treat abortion bans as the threat they are before more Texans are subjected to forced births or dangerous pregnancies.

Over the weekend, Progress Texas joined more than 50 Texas Democrats and abortion rights groups, including former State Senator Wendy Davis, in a letter on urging President Joe Biden to safeguard abortion access for Texans seeking care in and out of the state. The letter outlines five steps the Biden Administration can take right now. The proposals include:

3. Establish a Federal program for providers to dispense medication abortion.

5. Protect third parties within and outside the state of Texas from threat of civil and criminal actions where self-sourcing of abortion medications are used.

“Each day that the women of Texas are denied access to bodily autonomy represents a betrayal of our collective obligation to them and a danger to their health and well-being. They deserve the most aggressive, strategic fight possible and to know that we will use every tool at our disposal in service to their right to make decisions about their own bodies,” said Wendy Davis, former state senator and founder of Deeds Not Words and Defend the Frontline. “This is a fight for a woman’s fundamental right to live a full and equal life, plain and simple.”

To every leader, both elected and running, the future of Texas, of our entire nation, depends on you. The longer you wait to act, the more Texans are left without critical reproductive healthcare. Declare a public health emergency; fight to codify the right to abortion; go to hell and back for the people you claim to represent.

Abortion supporters are the majority — together, we have the strength to form a massive political resistance. Here are things you can do right now:

2) Get involved with progressive organizations

3) If you can, donate to organizations and candidates who fight for abortion justice day and night.

For more educational, financial, and legal information on abortion, check out our ROEvolution resource guide.