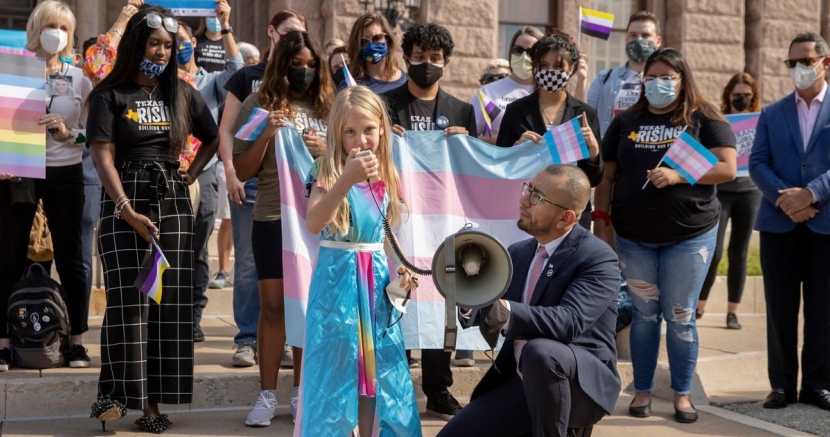 We celebrate Pride month in June to commemorate the anniversary of the Stonewall Riots, which began in response to a police raid at the Stonewall Inn in Manhattan nearly 53 years ago. These riots, led by trans activists of color, are thought of today as one of the major catalysts of the modern LGBTQIA+ rights movement.

For many, Pride is a time of joy and reflection of how far queer folks have come in this fight for equality. It’s meant to be a celebration of our freedom to be ourselves. But the truth is, that’s not the reality for many folks in the queer community.

Over the past year, Texas Republicans have:

Texas Republicans have also made it clear that they intend to pass a version of the “Don’t Say Gay” law in the state’s next legislative session.

Not only are these attacks bigoted in nature, but they have very real consequences for trans kids. Gov. Greg Abbott, indicted AG Ken Paxton, and other Texas Republicans are actively contributing to the stigma and discrimination that trans youth already face.

Transgender kids in Texas experience disproportionately high rates of depression and anxiety. According to Texas Children’s Hospital, 51% of transgender males and 30% of transgender females (ages 11-19) have attempted suicide at least once.

The science is clear: Gender-affirming health care saves lives and is endorsed by all major medical associations. Denying this care to children goes against medical standards and puts lives at risk.

This is not conjecture. A recent lawsuit shows that a 16-year-old trans boy tried to kill himself the same day that Abbott issued the directive calling for investigations of families of trans kids. The 16-year-old survived the attempt and was admitted to a psychiatric facility. When staff learned he was undergoing hormone therapy, they turned in his family to the Texas Department of Family and Protective Services due to Abbott’s directive.

Every Texan should be horrified by this story. Greg Abbott and Texas Republicans claim they’re “protecting kids'' with these attacks on LGBTQIA+ Texans, but this couldn’t be further from the truth.

A gunman killed 19 children and 2 teachers with a weapon of war at Robb Elementary School in Uvalde on May 24th, and Republicans are wasting time attacking drag queens. These attacks are a distraction from the real challenges Texas kids are facing. Republicans are doing what they do best: inventing problems to rally their far-right base around.

First it was CRT. Then it was trans kids playing sports. Now it's....drag?

None of these things fix inflation, bring healthcare costs down, or save kids from gun violence.

It's just the fear tactic of the month for the GOP. And it's embarrassing. https://t.co/VWQQWhVMTk

This is a master class in messaging. And if you want a more thorough example, watch McMorrow’s viral speech on similar attacks against the LGBTQIA+ community:

Senator Lana Theis accused me by name of grooming and sexualizing children in an attempt to marginalize me for standing up against her marginalizing the LGBTQ community...in a fundraising email, for herself.

Hate wins when people like me stand by and let it happen. I won't. pic.twitter.com/jL5GU42bTv

As progressives, every chance we get, we have to find a way to message on the real issues impacting Texans. Republican “leadership” in Texas is failing us and failing our kids. Texas is the most uninsured state in the nation, our energy grid is unreliable, housing is unaffordable, children are being murdered at schools, and kids are dying in our foster care system.

Texas Republicans have been in power in Texas for nearly 30 years and every crisis our state is experiencing can be attributed to them. But instead of taking steps to solve these problems, they’re pointing their big bully fingers at trans kids and saying “Look over there!”

We have to point our fingers right back at them, and to all the issues they refuse to address. All while fighting like hell to protect trans kids and the entire LGBTQIA+ community.

Pride is about liberation for LGBTQIA+ folks and is a celebration of being who you are. While corporations attempt to take over Pride with rainbow capitalism, it’s on all of us to remember how Pride began and who led the movement.

Trans folks, and trans people of color especially, have always bore the brunt of attacks against the queer community. Full equality does not exist for LGBTQIA+ folks as long as our own continue to be oppressed by the systems that exist in our country today. The movement must be intersectional, and it does not begin or end with a certain month.

If you’re interested in getting involved to protect trans kids and fight for queer rights in Texas, here are some groups to follow: Equality Texas, Trans Education Network of Texas, and ACLU of Texas.