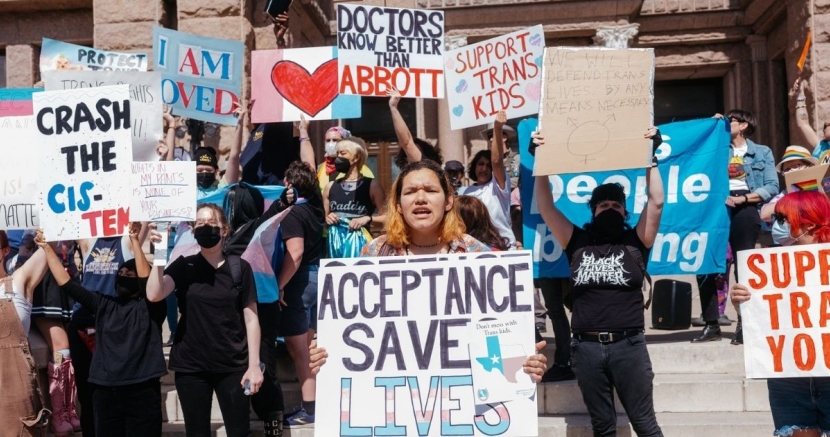 Lt. Gov. Dan Patrick said last week that he plans to prioritize passing a Texas version of Florida’s “Don’t Say Gay” law in the state’s next legislative session. The specific details of the bill may vary, but overall, the law seeks to prohibit schools from using a curriculum or discussing topics or books on gender identity or sexual orientation.

In Florida, the law’s language is so vague that it could be interpreted to mean no conversations on the existence of LGBTQ+ people at all, including discussions about students’ families.” The law doesn’t mention the word “gay” or “transgender” and some seem to think this means the law isn’t discriminatory, that it applies to all genders and sexualities, not just LGBTQ+ folks. But let’s be real. The only time this law will be an issue and the only time teachers risk being reported, is when LGBTQ+ people are the subject. And no, we’re not talking about teaching gender or sexuality, we’re talking about the mere mention of same-sex couples.

Realistically, K-3rd grade teachers aren’t talking about sex. They want to avoid that subject just as much as anyone else. They are merely mentioning LGBTQ+ people and normalizing these experiences so that children don’t experience harassment or cause harassment themselves in the future. Just like fear mongering around teaching history on race, Republicans are inflating classroom discussion way beyond its typical activities.

This is no surprise when you consider GOP legislators’ theme of hyper-sexualizing LGBTQ+ people. When book bans started happening, Abbott and Paxton used language like “pornographic,” implying that any book mentioning the LGBTQ+ experience is inherently sexual. Florida’s Gov. Ron DeSantis said teaching kindergarten-aged kids that "they can be whatever they want to be" is "inappropriate." Some other right-wing leaders have gone as far as equating LGBTQ+ classroom discussion to “grooming,” harping on anti-LQBTQ rhetoric used in the 1970s.

Republicans have taken things even further by attacking companies who’ve spoken out against Florida’s “Don’t Say Gay” law. For a party who loves to talk about the dangers of “cancel culture,” they’re the first to try to cancel any entity that doesn’t agree with their bigoted laws. Even Mickey Mouse is no longer safe from their crusade.

Dan Patrick declared that he’s “DONE WITH DISNEY!” in the subject line of a recent fundraising email. We’ve got news for Texas Republicans, if Disney were responsible for turning kids gay, the whole country would be queer.

The fact is, teachers are having normal, healthy conversations with students about their families and LGBTQ+ history. It’s Republicans who are sexualizing the existence of queer people, including LGBTQ+ youth ⁠— that’s creepy.

It’s this sexualization that’s striking fear in teachers. They won’t be able to chat with a student about their two moms or put a photo of their life partner on their desk, in fear that parents will accuse them of introducing their children to inappropriate content, even without any mention of sex.

To make matters worse, because the parent-enforcement mechanism of the “Don’t Say Gay” law is similar to that of Texas’ 6-week abortion ban, no one can challenge the law in federal court before it’s enforced. Add this to the law's purposeful avoidance of explicitly discriminatory language and the GOP can pass them with little to no fear of retribution.

Texas Republicans may not be explicitly calling for harm against queer folks, but banning LGBTQ+ books and classroom lessons silently yields the same results. Framing these topics as inappropriate automatically assumes any mention of gayness is a conversation about sex, and it also reinforces the idea that straying from the heterosexual, cisgender norm is wrong.

Once you remove sex from the subject, ask yourself what purpose avoiding the word gay or trans around kids serves? How does refusing to answer their questions on the matter really help us? It doesn’t. If anything, it’s harming us. We’re creating confusion, framing LGBTQ+ folks as monsters, people to fear, and topics to avoid.

When these ideas are ingrained so early on, children internalize them. For kids who discover they’re gay or fall outside of the cisgendered norm, this demonizing can cause immense mental health struggles. For others, this rhetoric gives the permission they need to harass and exclude LGBTQ+ people. No matter how you put it, framing sexuality and gender as “hot button” issues hurts our country and damns the future of our children.

LGBTQ+ youth deserve to see themselves represented at school. Ignoring the existence of queer folks does not mean they’ll disappear. It can also lead to bullying and social isolation, which could have a devastating impact on Texas kids.

While “Don’t Say Gay” is a Florida law, it’s only a matter of time before a similar bill reaches Texas. Patrick already requested it be added to the docket for our 2023 legislative session and some even want the law extended to K-8th. If they were looking for a way to codify the banning of LGBTQ+ books in school libraries, this is likely it.