How to counter Republican attacks on trans kids in sports 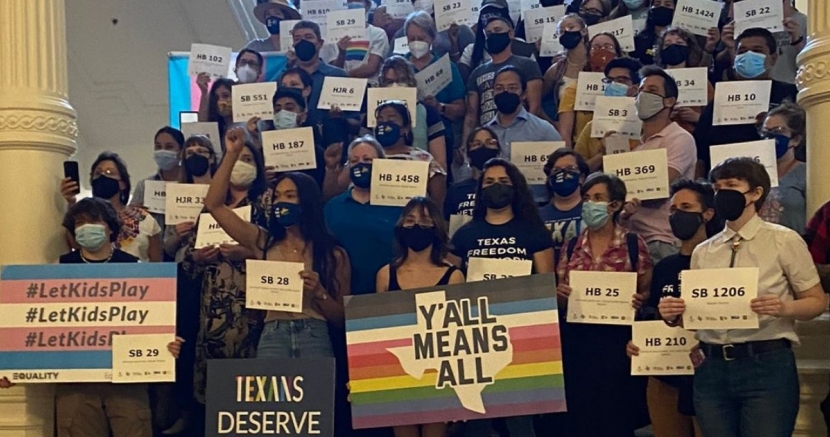 Wesley Story
Texas has introduced the most bills targeting transgender youth in the country this year.

This year Texas introduced the most bills (more than 40) targeting transgender youth in the country, but due to the hard work of activists, community members, and young LGBTQ+ Texans, none passed … at least, not yet.

After three sessions, you would think Gov. Greg Abbott would take the hint and realize the GOP’s transphobic bills are unpopular and dangerous. But no, instead, Abbott doubled down on his discrimination and included anti-trans legislation on the call again, for the fourth legislative session of the year.

Lt. Gov. Dan Patrick is taking it a step further in making these anti-trans bills a priority for the Texas Senate. Mind you, the whole point of this session was supposed to focus on redistricting. If Republicans were so eager to veer from that plan, they could be addressing the deadly pandemic that they’ve made worse with anti-science policies or, here’s an idea, why not fix the energy grid they’ve been neglecting?

The theme of 2021 is misplaced priorities and once again, Texas Republicans are choosing to appeal to an extreme, far-right base that does not represent the majority instead of focusing on the issues that matter most to Texans. And this time, trans kids are in the crossfire.

Republicans are moving quickly to jam through their anti-trans legislation.

On Sept. 21, the second day of the third special session, the Senate Committee on Health and Human Services voted to advance Senate Bill 3, a hateful and discriminatory bill that would ban transgender student athletes from participating in sports.

This is a sensitive subject and many people aren’t qualified to address it - especially conservative legislators. Here are the facts:

Though Republicans have made the anti-trans sports ban (SB 3 & HB 10) a priority, 26 bills have been filed in Texas this year that would ban transgender kids from a public school activity.

Several bills have also been filed that attack gender-affirming healthcare, including SB 15 and HB 26. Like the youth sports bans, these bills are not based in science. Every major medical association supports transition care and studies show that transition care saves lives every year. Gender-affirming healthcare is safe, essential, and a decision between a doctor and a patient.

Our friends at Equality Texas have tracked all of the anti-trans bills for the third special session here. If passed, these transphobic bills would add to the stigma and discrimination that trans youth already face, putting lives at risk.

Trans kids should not keep having to show up at the Capitol to fight for their right to exist.

Transgender children just want to live their lives like any other kid and should be able to enjoy the same opportunities without the fear of being discriminated against.

We must call this anti-trans legislation out for what it is: another attempt to control people's bodies and ostracize trans youth for a few far-right votes in the Republican primaries. Young Texans deserve so much better from our lawmakers.

Texans have defeated these bills three other times this year, and we must keep fighting. It’s going to take all of us to ensure that the rights and dignity of trans Texans are protected. Contact your representative and tell them to vote against all transphobic and anti-LGBTQ legislation that comes across their desk.