Trans youth and their families need support now more than ever 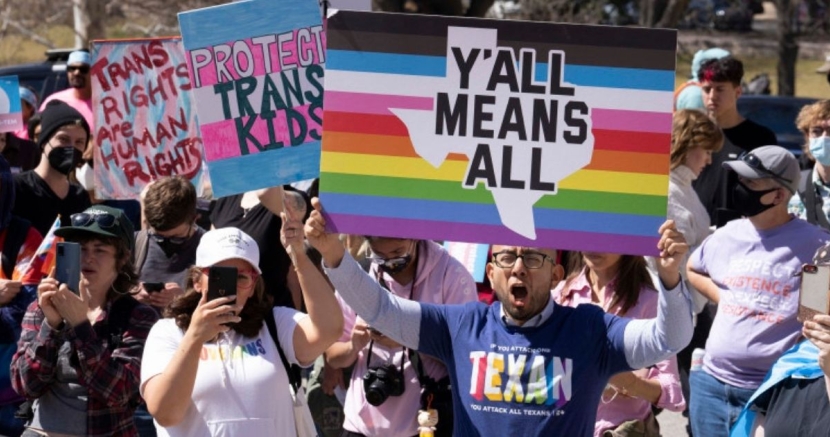 Emily Clark
Greg Abbott is terrorizing trans kids and their families with investigations while spreading lies about gender-affirming care.

While Paxton and Abbott’s releases aren’t legally binding, their words still have power and their goal here is clear. Abbott and Paxton want to create fear, to silence transgender kids, and ultimately, to erase their existence. They're putting the lives of trans kids at risk, all for a few votes from far-right extremists who want to send trans kids into hiding. Abbott is the real abuser here, not loving parents who support their trans child.

In his letter, Abbott emphasized criminal penalties one might face upon failure to report instances of abuse. This was another fearmongering tactic to target those supporting trans kids. Out of fear of punishment, some medical professionals have ceased gender-affirming care in their facilities. Much like what happened with the Texas anti-abortion law, members of the public have been encouraged to report as well.

We’re already seeing the effects. Five investigations have been confirmed, though many more could still be happening. While some local governments, school districts, and attorneys have come out against Abbott and Paxton, the number is minuscule compared to the size of Texas and its population. To stop a lie this harmful, it’s going to take all of us.

Know the facts about gender-affirming care.

The best way to combat Republican abuse accusations is by explaining the truth: gender-affirming care is life-saving care.

When people in power fearmonger, their lies still stick like flies to more people than you’d think. Whether that’s out of misunderstanding or ignorance, the effect is the same - transgender youth suffer. They face incredible stigma, only worsened by Republican rhetoric. Creating targets out of trans youth directly leads to bullying, harassment, and isolation that often has a detrimental effect on mental health. More than half of transgender and nonbinary youth have seriously considered suicide in the past year and, given suicide is one of the leading causes of death among young people, this situation is not something to take lightly. These are preventable deaths. With enough work, we can fight the stigma and stop the harassment.

People need to know, gender-affirming care is extremely safe. It is “judgment-free, individualized care oriented toward understanding and appreciating a person’s gender.” That usually starts with social transitioning, like cutting one’s hair or changing one’s name and clothes. If trans youth decide on a further change, doctors move to puberty or hormone blockers which are NOT permanent and are completely reversible methods of treatment.

Puberty blockers essentially slow down puberty to give trans youth time to decide if they want more permanent transition-related care in the future. To be clear, puberty blockers are used on children of all genders. Many children start puberty too early, so doctors use these medicines to slow down the process and allow the body to catch up. When a person stops puberty blockers, their body goes through puberty the same as anyone else, just at a delayed time. More advanced medical procedures like orchiectomies, hysterectomies, and mastectomies rarely, if ever, occur before adulthood.

When things are this bad, it may seem appealing to encourage trans youth and their families to move somewhere safer. Don’t. LGBTQIA+ Texans are not going anywhere. Texas is our home, our community. No matter who represents us at the state level, no one can take that away from us. Rather than forcing people out, we need to transform Texas into the inclusive, loving space we wish it to be. Our state motto is “friendship” after all.

Shortly after Abbott and Paxton’s letters were released, the ACLU and Lambda Legal sued, challenging investigations into the families of trans youth. Their lawsuit was a direct response to the first reported instance of a trans teen’s family being investigated. After an injunction was placed on the investigation, Paxton tried to appeal otherwise, but the court ruled against him. Because of the appeals court’s decision, a lower court will be able to hold a hearing on whether Abbott’s directive can stand.

This is where you come in. This Friday, March 11th, at 9 am, the Texas Department of Family and Protective Services (DFPS) is meeting to allow public comment on the Governor’s order and CPS investigations. If you are a trans youth or a family member, you can submit testimony. If you are an ally, volunteer to read a family’s testimony at the hearing to help maintain their anonymity. For those who cannot make it to the hearing but still want to help, submit a public comment to the DFPS. Find links to submit testimonies, volunteer, and comment here, thanks to Equality Texas.

You can also donate to organizations on the ground fighting for LGBTQIA+ rights in Texas. Some of these groups include Equality Texas, the Transgender Education Network of Texas, ACLU of Texas, and Lambda Legal.

If you miss Friday’s action, no worries. Here are some other ways you can get involved:

People have asked how they can help. Thank you.

In no particular order and in a very long thread, this is what my family needs right now:

1. For you to stay mad. Publicly shame @KenPaxtonTX amd @GregAbbott_TX over this.
2. Write letters to the editor.
3...

Whatever your relation to trans youth is, the most important thing you can do right now is show your support. Whether it’s by taking direct action or sharing messages of love, trans youth need to know that what our representatives are doing is not okay and we do not agree with them. Texas is better than this, so let’s prove it.