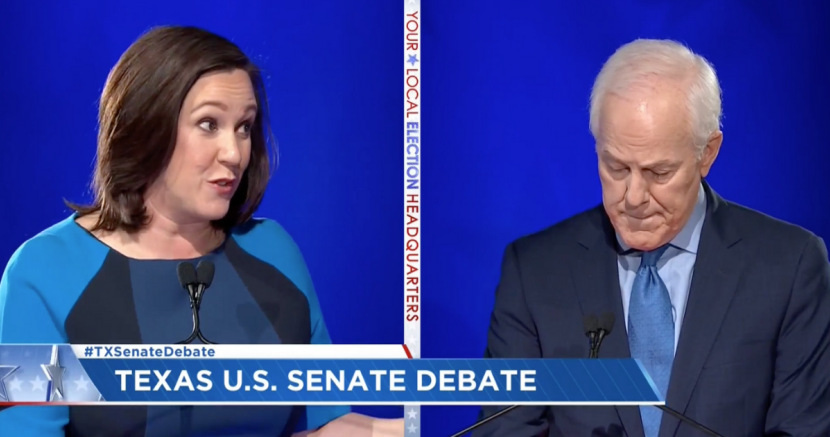 Abby Springs
MJ took Cornyn to task and proved that she’s the leader we need fighting for Texans.

Can anyone smell smoke? Because Texans saw Senator Cornyn get roasted by Democratic Senate candidate MJ Hegar on the debate stage. John Cornyn isn’t used to being held accountable, but MJ held his feet to the fire on COVID, the Supreme Court, and more. In case you missed MJ’s killer debate performance, here are some highlights to show you why she’s the candidate to actually represent Texans in D.C.

Cornyn likes to pretend he’s running against a Democratic boogeyman — not MJ Hegar, purple heart combat veteran and working mom. Instead of discussing policy with MJ, Cornyn decided to fall back on the Republican playbook and go after Chuck Schumer and Nancy Pelosi. That’s why MJ had to step back and reintroduce herself to Cornyn, reminding him who his opponent in this race really is.

2. Cornyn is finally forced to answer — why don’t Texans know who he is?

Cornyn has been in the senate for eighteen years, but for much of his tenure, two-thirds of Texans either didn’t know him or didn’t like him. When pressed on why he’s a non-entity in our state, Cornyn said that he still had 25 more days to make his case. But if Cornyn hasn’t been able to make a difference in nearly two decades, it’s clear that the next few weeks won’t be enough.

3. MJ calls out Cornyn for inaction on COVID relief packages.

It’s been months since the last COVID relief package was passed, and Texans have been struggling to make rent and buy groceries during the pandemic. Even so, Cornyn said he has done everything he can to get relief for Texans. MJ reminds us: if Cornyn’s doing the best he can, we need someone who can do better.

Over the summer, as protests against police brutality and systemic racism swept the nation, Cornyn ignored Texans of color and ignorantly claimed that systemic racism doesn’t exist. We need a senator who can not only address the impacts of systemic racism, but one who is willing to acknowledge it exists in the first place.

5. Cornyn tries to spread misinformation about COVID and children — again.

There’s a lot we don’t know about COVID-19, but there’s one thing we know for sure — children can catch and spread the disease. However, despite the science, Cornyn downplayed COVID’s effects on children in front of thousands of Texans. Thankfully, MJ made sure to correct the record and remind Cornyn that children are affected by the virus, something that a mom like MJ is sure to understand.

6. Cornyn is called out for his Supreme Court flip-flop.

Cornyn doesn’t appear on TV often, which is why he’s not used to being called out for his flip-flops and betrayal of trust. In 2016, when President Obama nominated Merrick Garland for the Supreme Court, Cornyn said that the winner of the election should fill the vacancy. Today, he thinks that Trump should be the one to fill Justice Ginsburg’s seat. Sounds a lot like flip-flopping to us.

7. MJ proves she’s the badass leader we need in the Senate.

Throughout the debate, MJ stayed focused on issues and ideas while Cornyn relied on lies and fear-mongering. It’s more clear than ever that we need to kick out “leaders” like Cornyn and Trump and replace them with fighters like MJ — strong Texans who can stand up to corruption and stand up for us.