Voting is a necessary act of defiance 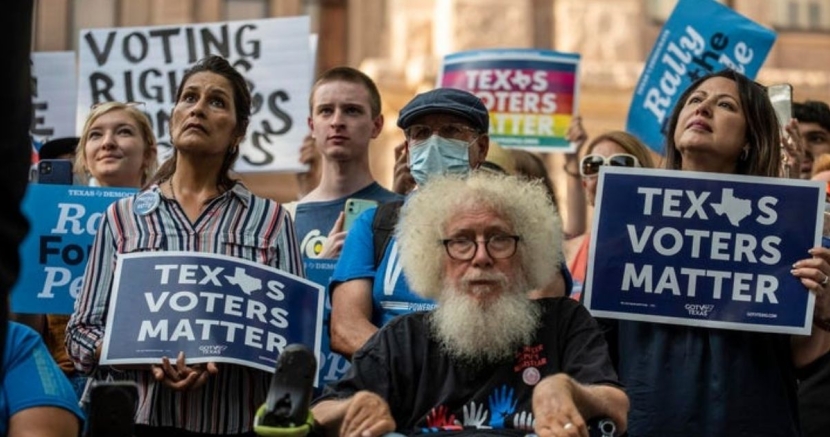 Emily Clark
In an age when Republicans are desperate to suppress our vote, it’s our duty to fight back.

For years, Texans have been bombarded with news about how our voting rights are under attack. For years, the same people have held the bulk of power in Texas. It’s time for a change.

Older, white, Republican men should not be in control of a state that looks and thinks more unlike them with each passing day. It would be one thing if they were creating helpful legislation, like expanding health care for Texans, but their actions are doing more harm than good - and they know it.

Why else would they be continuously constructing barriers to voting? Republicans saw Texans show up to vote in record numbers in 2020, despite multiple attempts to suppress us. They saw polling mounting against them and young voters beginning to question them. The only way they could slow our momentum was by ensuring the Texas Legislature stayed in session for months on end in 2021.

They couldn’t pass voting restrictions the first two times around, so they called more sessions until they got what they wanted. Activists and Democrats in the Texas legislature tried their best to deflect attacks on our voting rights but, with Republicans holding so much power in Texas, their attempts were undermined again and again.

Things can begin to feel hopeless when harmful legislation becomes law, but we cannot stop fighting for our freedoms just because a few Trump-loving Republicans have a grip on our state. Giving up is exactly what they want us to do.

When their only way of maintaining power is ensuring those who show up to the polls vote, think, and look like them, it’s our job to defy their endeavors. We, as members of a representative democracy, have the power to decide who can shape our futures. We can punish those who act with greed and reward those who value our needs.

Showing up to vote is our best bet at unseating authoritarian politicians like Abbott and Paxton. The more Texans they block from voting, the more power they have over us.

Anti-voter laws and voter purge tactics have made voting difficult for some Texans. Even people who have been voting for decades are struggling to submit their ballots.

On the other hand, for some of us, voting has been easy. We’ve had few issues at the polls and have never worried about whether our vote would count. That means it’s our responsibility to fight against whatever barriers fellow Texans are facing. We cannot defeat bad politicians and resist harmful policies alone. It takes a community.

When those in power put up barriers to voting, the act of voting itself becomes not just our civic duty, but a necessary act of defiance. Republicans thrive when voters are so cynical they decide to stay home. Don't let them win. Don’t be silenced. Turn your anger and grief into concrete action by voting. Vote in every election.

Too many people fought and died for our right to vote for us to abandon it. Not voting doesn’t send any message to our representatives except that their nefarious, money-driven plans are working.

For democracy to work for all of us, it must include us all. The only way to achieve such inclusion is by electing people who respect the freedoms us Texans desire - the freedom to make a good living, to lead happy and healthy lives, and to pick the leaders who represent US.

Make sure your friends and family have a voting plan. Send them to Vote411.org so they can review what’s on their ballot and decide who they’re voting for. Then make sure they have the proper ID and help them find their polling location.