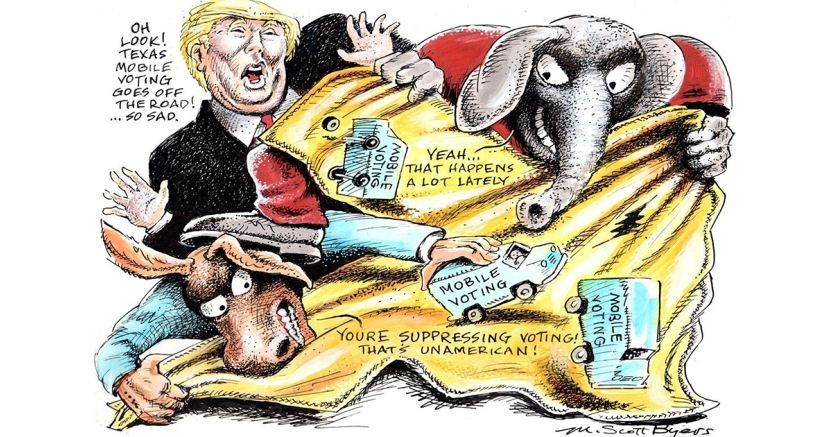 In recent years, Republicans have passed so many voter suppression laws they’ve made our elections look like the old TV game show “Wipeout.” That was the one in which contestants tried to make it through a difficult obstacle course of swinging pendulums and spinning spokes without being knocked down.

According to the Brennan Center, since 2010 more than 25 states have implemented new laws making it harder to vote. These include such restrictions as reduced early voting periods, oppressive ID requirements many citizens find hard to meet, and reductions in polling places.

The 2019 Texas Legislature added a new obstacle meant to knock down voters: a ban on temporary, mobile voting sites. Republican lawmakers tried but failed to pass even more onerous restrictions, including one that could have made it a felony to make a mistake on voter registration forms.

GOP support for President Donald Trump’s authoritarian ways might make us wonder if democracy is no longer one of the Republican Party’s favorite things. From voter suppression to the attacks on constitutional checks and balances, what was once mocked as the Daddy Party has become the Abusive Daddy Party.

As far as the GOP’s attitudes toward voting rights go, the party is no Charles Ingalls from Little House on the Prairie. It’s more like Pap Finn, Huckleberry’s hateful pa.

The ban on mobile voting sites, used primarily to take polling places temporarily to locations in far-flung locations or in communities with many students, elderly or other less mobile folks, may have been an obstacle too far for Republicans, however.

It seems like a lot of their own voters are taking it on the chin. Rural, dependably Republican areas will have far fewer and less convenient polling sites. Oh, those laws of unintended consequences.

Republican backers of the plan argued that in certain low turnout instances like school bond elections, officials were gaming the system and using temporary voting sites to pre-select the voters they most wanted to vote while ignoring voters they just as soon stayed home. Seems far-fetched.

The popular struggle for voting rights has never ended in America. It was only 100 years ago that women gained the right to vote. The federal Voting Rights Act – still under assault from conservatives – was only passed in 1965.

Texas Gov. Greg Abbott and his secretary of state got caught just this year in trying to purge the voter rolls of many eligible citizens.

There’s a lesson for Republicans here — a lesson that perpetrators of many kinds of oppressions learn sooner or later. It takes great effort to deny freedoms to folks, and sooner or later the oppressors learn they are as enchained by the effort as their targets.

Laws aimed at diminishing our democracy by suppressing the votes of certain targeted citizens will ultimately have one clear consequence: a loss of respect for everyone’s voting rights.

Republicans may prefer that voters they assume oppose them find it harder to get to the polls than the voters they assume support them. But, they can’t diminish voting rights without ultimately diminishing everyone’s right to vote, including their own.