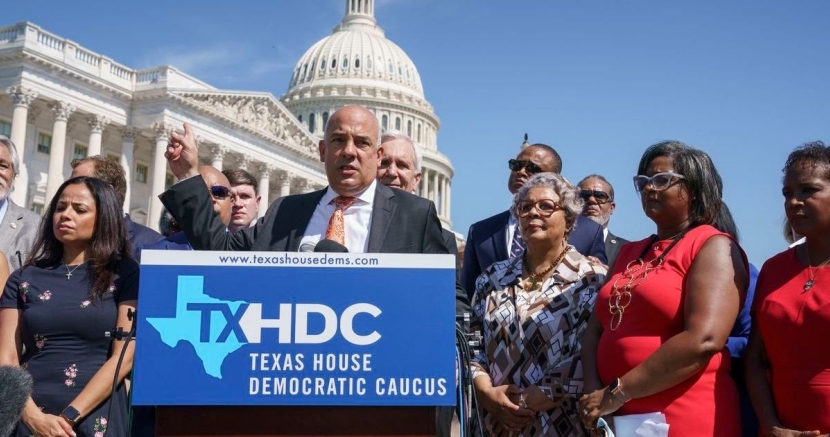 Abby Springs
A total of 17 states have passed voter suppression laws in 2021 - it’s time for Congress to finish what the Texas Democrats started.

When Texas House Democrats broke quorum and flew to Washington DC, they weren’t just carrying their luggage. They were also carrying the voting rights of millions on their shoulders — not just Texans, but Americans all across the nation.

It’s no secret that our democracy is under attack, fueled by Republican voter suppression efforts and Trump’s Big Lie. When Texas Democrats broke quorum to stop voter suppression in Texas, they could have gone anywhere outside of the state. But they chose to go to our nation’s capital, to push Congress to take action and protect our right to vote.

Voter suppression isn’t a Texas issue — it’s a national issue. And we need Congressional action to stop it for good.

1. Voting across the country is already difficult, especially in GOP-controlled states.

Thanks to restrictive voting laws and voter suppression tactics, it’s harder to vote in Texas than any other state in the country. Between voter ID laws, limitations on vote by mail, a lack of online voter registration and other voter registration restrictions, the process can be complicated and confusing to navigate. Texas has some of the lowest voter turnout rates in the country each year, and our laws were designed by GOP leaders to keep it that way.

But while our state holds the last-place title for voter suppression, millions of Americans live in Republican-controlled states with barriers to the ballot box. In 2020, voters were forced to stand in lines up to 11 hours long in Georgia, North Carolina, Tennessee, Louisiana, and Ohio. And before last year’s elections, states removed hundreds of thousands of eligible voters from their rolls.

Even despite these voter suppression tactics, 66.8% of eligible Americans voted in 2020, an increase in turnout from 2016. But that was too many voters for Republican lawmakers, who have begun pushing anti-democracy bills in state legislatures across the nation.

2. States across the country are passing even more restrictive voter suppression bills.

By breaking quorum twice, Texas House Democrats killed voter suppression bills that would have put up barriers to the ballot box for millions of Texans. Senate Bill 7, which died in the May quorum break, would have limited early voting hours, restricted different forms of voting, and made it easier for judges to overturn an election. The voter suppression bills of the special session weren’t much better, and included citizenship checks and new voter ID requirements.

Texas isn’t alone in the fight for democracy. As of mid-June, 17 states had passed 28 laws that make it harder for people to vote, mostly targeted towards people of color. Voting rights advocates have called the onslaught “Jim Crow 2.0,” as the laws reverse pandemic voting innovations and empower partisan poll watchers. Some make it easier for states to remove people off voter rolls, and other proposed laws would allow states to overturn election results.

The timing of these bills is not accidental. Since November, Donald Trump has pushed the baseless conspiracy that there was widespread voter fraud in the 2020 election, which Republicans have used as justification to suppress votes across the country. Now, they’re doing everything they can to give themselves an unfair advantage.

3. Our nation needs fair and equitable redistricting, especially in Texas.

To make things just a bit more complicated, our democracy is facing another threat that can reduce the voting power of people of color — gerrymandering. This year, Texas is set to redraw our electoral maps to include two new congressional districts (pending a quorum and a budget for the Texas Legislature). That means Texas Republicans can redraw our maps to keep themselves in power, which usually involves targeting BIPOC Texans.

Unfortunately, Republicans control a majority of state legislatures across the country, which means that the party of Trump is mostly in control of the redistricting process. We’ve seen how far the GOP is willing to go to undermine democracy, and gerrymandering could give them an electoral advantage without a single new voter.

The last time Texas Democrats broke quorum was in 2003, to stop a discriminatory Republican gerrymandering plan. Today, they’re repeating history to push for federal legislation that could restore our vote, end partisan gerrymandering, and protect our democracy for good.

4. The For the People Act and John Lewis Voting Rights Act can stop voter suppression, in Texas and beyond.

The FTP Act includes a broad range of policies, from automatic and same-day voter registration to requiring states to use independent, nonpartisan commissions for redistricting. The JLRV Act is narrower, requiring states with a history of voting rights legislation to seek approval from the federal government for any changes to voting laws. Together, these two bills can finish what the Texas Democrats started and stop voter suppression across the nation.