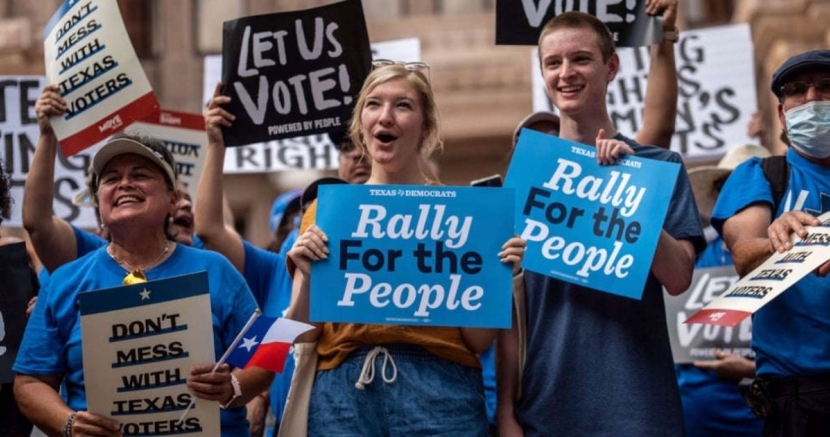 Abby Springs
The ‘For the People Act’ and the ‘John Lewis Voting Rights Act’ have the power to fundamentally repair democracy.

Last weekend, on the first day of summer, thousands of Texans travelled to Austin to rally in support of voting rights. The week before, Texas legislators visited Washington D.C. to urge Congress to support pro-democracy legislation. And during the regular session of the Texas legislature, hundreds more testified, marched, and protested to stop anti-voting bills. All together, Texans are sending a message — we need federal voting rights legislation now.

Texas is already the hardest state in the nation to vote in. Our state has restrictive voter ID laws, reduced polling place locations, and a 30-day voter registration deadline, giving us a low voter turnout rate and over 3 million unregistered voters. All of this is by design, since Texas Republicans have spent years trying to disenfranchise Texans to stay in power.

The 2021 legislative session brought a new wave of anti-democracy legislation, fueled by Trump’s Big Lie of the 2020 election. Omnibus voter suppression bill SB 7 would have limited early voting, restricted vote-by-mail, and even made it easier to overturn election results. Luckily, progressive allies fought against this bill all session, and ultimately Texas Democrats defeated the bill in a historic quorum break. But Governor Abbott has already announced a special session to bring back the voting restrictions, setting Texans up for another fight over our fundamental right to vote.

While Texas Dems protected voting rights at the state level, federal action can protect democracy on the nation-wide. Federal Democrats are pushing for two bills to protect our right to the ballot box — the For the People Act and the John Lewis Voting Rights Act. If passed, the legislation would override many existing voting restrictions put in place by legislatures in Texas, Georgia, and across the country.

Here are some of the highlights:

The John Lewis Voting Right Act is narrower in scope, strengthening provisions of the 1965 Voting Rights Act. Most importantly, it restores federal preclearance requirements, which were struck down by a Supreme Court decision in 2013. Under the law, any state with a history of voting rights violations in the last 25 years would be required to seek approval from the federal government to change their election laws or procedures. Essentially, it would stop Republican-controlled states from implementing any new voter suppression laws. Combined with the For the People Act, which overturns voter suppression already in place, these two bills have the power to fundamentally transform our democracy into a democracy that works for all.

Unfortunately, the For the People Act has already been voted against in a Senate procedural vote, where the bill was unable to overcome the 60-vote filibuster threshold.

So far, Senators Joe Manchin (D-WV) and Kyrsten Sinema (D-AZ), have both firmly stressed their opposition to eliminating the filibuster. While Senator Manchin has put forward a promising compromise proposal to protect voting rights, no Republicans have come out in support of the plan. That means we need to keep putting pressure on Senators Manchin and Sinema to overturn the filibuster rule, clearing a path forward for our democracy.

Each day Congress waits on passing voting rights legislation is another day that Republicans in state legislatures can push through voter suppression. This is the same party that enabled Trump when he tried to overturn the 2020 election, leading to a violent insurrection in the United States Capitol. Defeating their anti-voter agenda and promoting a healthy democracy is crucial for the future of our country.

Help put pressure on Manchin and Sinema to overturn the filibuster and pass crucial voting rights bills! You can email Joe Manchin’s office here and Kyrsten Sinema’s here. You can also urge our own senators, Cornyn and Cruz, to vote on the For the People Act and the John Lewis Voting Rights Act. Finally, support the fight for democracy on our own turf by supporting organizations that advocate for voting rights, including Progress Texas!

Texans know that there’s no time to delay on voting rights legislation. Republicans in our state are pushing forward with voter suppression, and passing the For the People Act and the John Lewis Voting Rights Act is the best way to stop them in their tracks. Our democracy is on the line, and it's time for congressional Democrats to step up and save it.