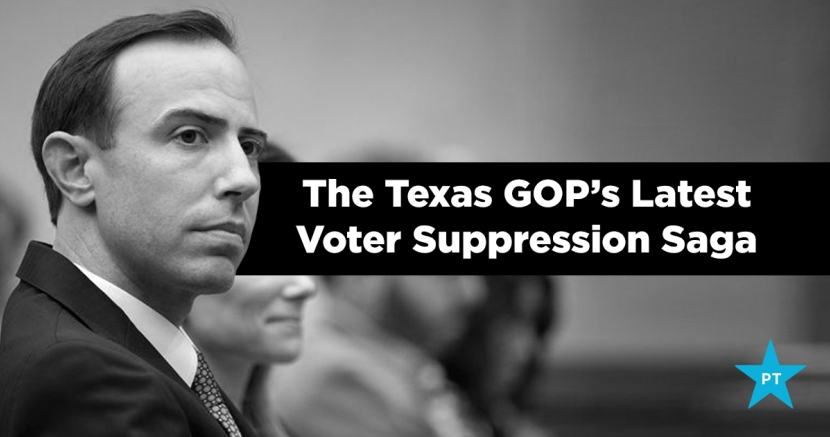 Charlie Bonner
Republicans are back at it with their voter suppression games and Progress Texas is fighting back.

After a discriminatory and malicious voter purge earlier this year, Texas voters have won back their rights. The state will settle the case and rescind the voter purge completely. Governor Greg Abbott is desperate to settle this case in an effort to move his nomination for Texas Secretary of State, David Whitley, forward after his blunder that lead to massive voter confusion.

This is a victory for Texas voters and new citizens. Texans will continue to fight back against Republicans’ long history of suppressing the right to vote, and Democrats must continue to block the nomination of Abbott’s Secretary of State.

The settlement is a flashback to then-Attorney General Abbott’s efforts in 2012 to cover-up a similar purge of more than 60,000 living Texans after inaccurately matching data from Texas Master Death file while.

David Whitley was appointed by his former boss, Gov. Greg Abbott, to hold Texas’ top election position back in December, and things have not been going well.

Almost immediately, Whitley began executing a massive voter suppression effort that furthers the history of a decades-long attempt by Texas Republicans to prevent people of color from voting.

Republican claims of voter fraud are just plain not true, and no lie can live forever. One of the most critical parts of our work here at Progress Texas is to call out these lies and hold accountable those who perpetrate them.

Texans refuse to stand for these deceptive tactics and are speaking up for those being attacked and purged from the voting rolls. When we join together and change the conversation about voting rights, we make progress possible.

Note: This may take a moment to load on mobile.

On February 21st, Progress Texas joined more than 30 organizations in a letter that calls on Senate Democrats to hold the line and vote NO on Whitley's nomination. His work is a threat to our democracy and our basic rights; all of us have a responsibility to speak out.

On February 22nd, all 12 Senate Democrats announced their opposition to David Whitley’s confirmation, stopping the latest round of voter suppression efforts pushed by Texas conservatives. This news is the latest in our collective effort to protect the right to vote and to demand fair and free elections. Through Progress Texas’ digital organizing work, thousands of Texans were able to contact their Senators and demand they vote “no” on Gov. Abbott’s nominee. Because they spoke up, we have halted David Whitley's nomination and his voter suppressing ways.

On February 22nd, Whitley's nomination was successfully voted out of committee along party lines. His confirmation will now head to a full floor vote of the Senate where he will need 2/3 of all Senators present to proceed. Using our petitions, thousands of Texans are telling their Senators to vote NO, Join them now!

Need to catch up on the voter suppression madness? We’ve compiled our best work for you to follow the Whitley hearings and lawsuits. Check them out and then check back as we keeping an eye on ol’ David Whitley and continue to amplify progressive voices in this fight.

On March 28th, the United States House Committee on Oversight and Reform sent a letter to Texas state officials Thursday asking for documents related to their voter suppression effort. That means Congress is investigating the office of Gov. Abbott’s appointee for Texas election’s protection for purging over 90,000 Texans from the voting rolls, a huge step in ensuring voting rights are protected.

Texas must end the threat to unregister thousands of citizen voters

KVUE Face Off: Texas has not backed up claims of "voter fraud"

KVUE Face Off: Property taxes and voter suppression at the #txlege

Break Down: Voter Suppression and the Texas Secretary of State

It’s not too late to make your voice heard, sign our petition and tell senators to vote NO on Whitley.